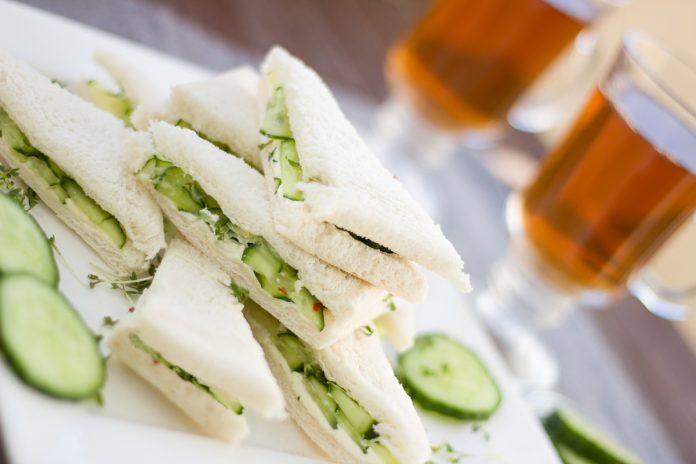 * The small size of the sandwiches that is obtained by cutting the regular size bread into four small triangle pieces. Thus, they are easily gulped up in two or three bites.

* They are crust less, i.e. the edges of the bread which usually tend to be hard are removed

* They are thin-sliced which makes the sandwiches light food item to have during the tea session in the afternoons.

* The sandwich recipes are flavorful and hence compliment with the tea. They are not sweet, and often prepared with, garlic, scallions, spicy mustard, and pepper.

* Each one of them is spread with soft butter or cream cheese to avoid the sogginess of the sandwiches.

These form the main ingredients of the tea sandwich recipes, the other stuffing or fillers can be considered as add on. These sandwich recipes can be a good idea for having food items during the theme parties, birthday parties and similar occasions.

The category of the popular and most widely accepted tea sandwich recipes are given below:

This sandwich is easily prepared by just mixing up all the ingredients well and applying the mixture on the bread slices.

Cucumber Tea Sandwich recipe is still the quintessential tea sandwich recipe. Everyone mostly accepts it and most of the tea parties are incomplete without it.

It can be prepared quickly and tastes very yummy. Initially the cucumber is sprinkled with little salt. One slice of each sandwich is applied with the paste of butter and garlic. In a bowl stir together the lemon juice, olive oil, pepper, and add the cucumbers so that they are well coated by the mixture. Then arrange all these cucumbers in between two slices of all the sandwiches and serve by cutting off the edges.

The sandwich can be prepared by mixing all these ingredients and applying it on one of the sides of the tasted bread.