How to Remove a Wasp Nest 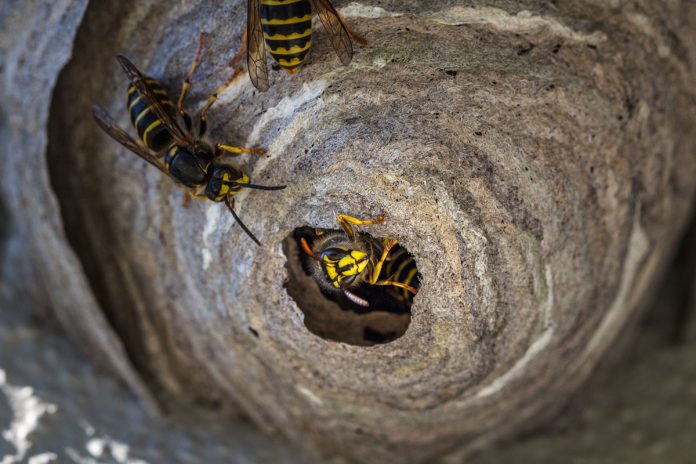 To remove wasp nest, there are two different methods that can be followed. One is to remove it using sprays and poison, the other is to do it naturally without using any spray of poison. Wasps are tiny insects but can cause a lot of pain I they sting. There are also many species of wasps and it’s important to know the species before dealing with the removal of their nest.

Whether the sprays are used or the natural method is followed, it’s imperative that protective clothing should be worn. This will ensure that at the time of removal, the wasps don’t sting any exposed portion of the skin. Old clothes that can be secured tightly or bee keeper protective clothing will work just fine. The eyes must be covered with eye goggles. The hair, face and ears right down to the toes should be covered in appropriate protective clothing.

The best time to remove wasp nest is during the night, as the wasps return to their nest when there is a drop in the temperature. During the day, if the nest is removed, the wasps can rebuild it. This is the reason that wasps and their nest needs to be dealt with. Ensure that people, pets and other livestock are out of the harms’ way before the removal can be carried out.

Specific sprays and poisons are available at most grocery shops and hardware shops that can be used for the removal of the nest. Look for the ones that allow a person to be stationed at a very safe distance while spraying the nest. The nest needs to be drenched. Usually in the morning following the spraying, the wasps are dead. Even those wasps that weren’t in the nest earlier will die when they come in contact with the nest as soon as they fly near the nest.

Doing It The Natural Way

Do you know how to remove wasp nest naturally, two people are required. Ensure that both people are wearing protective clothing and gear as wasps can be dangerous. Use a big box with a tight fitting lid that can hold the nest quite easily. While one person has to hold the box under the nest, the other will have to de-tangle the nest from its place. Both have to work quickly in conjunction. Simply cover the lid of the box and almost instantly submerge it in water or put it in a freezer. Before removing the box from water or the freezer, ensure that wasps are dead. The box should be left for approximately 2 -3 hours before it’s safe to open the box and destroy the nest completely.

How to remove a wasp nest