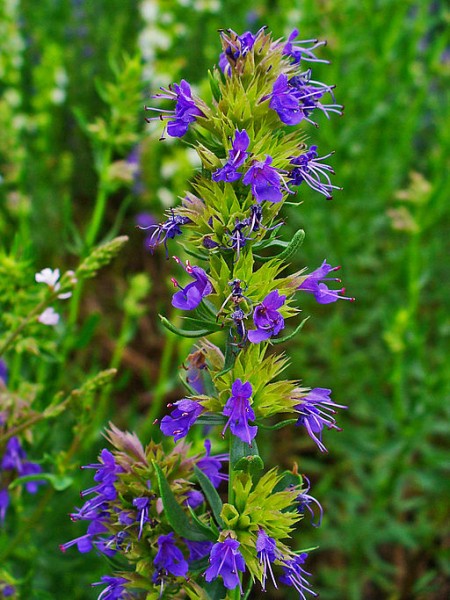 Popular herb garden plants used as sectional edging or container inmates, hyssop is an attractive, if attenuated, sweet scented evergreen. It sports minute leaves and has little lilac-blue blossoms which give a fine show from the middle of summer onward.

I read recently that William Turner was cognisant of hyssop. He authored the first ever English-language book on English plants. This was circa 1558 and I quote “the brethe or vapour of Hisop driveth away the Winde that is in the ears, if they be holden over it’.

A native of the warmer parts of Europe and the Mediterranean rim, hyssop is mentioned in the bible. These popular herb garden plants started their eastern migration in the 11th century and were established in Britain around the 14th century as popular herbs. Thereafter they were taken to the New World.

Memorably aromatic, they were very important medieval herb garden plants grown for their function as one of the standard strewing herbs. Notably, oil of hyssop was used in the Chartreuse blends and was certainly as highly regarded and in demand as the better known oil of lavender.

The volatile oils extant in hyssop were well known to the American colonists as a specific remedy for catarrh and rheumatism as well as being an antiseptic. Hyssop flowers make a tea used for easing of catarrh, another delivery medium being by way of crushing and introducing into a herb-based pipe tobacco.

Apart from the traditional usage as strewing herbs through its aromatic virtues, hyssop is popular in potpourri recipes, adding a distinctive almost incense-like tinge to a potpourri. Hyssop was one of the most important herb garden plants for the earlier settlers, who were sometimes cut off from their peers and medical attention for long periods.

Grow hyssop through spring cuttings or seeding. After sprouting roots, plant cuttings in a peat mixture somewhere shady enough to stay moist. Deceptively hardy plants, they will nevertheless benefit from a well drained soil in their beds, window boxes or containers. These are herb garden plants that benefit from apicular pruning in autumn to bush out better in summer.

Pete Steel has grown herbs for 25 years in several different climates and soils. He gives out herb garden information and writes about herb garden plants.

Spring Herbs – Uses for The First Plants of The Season