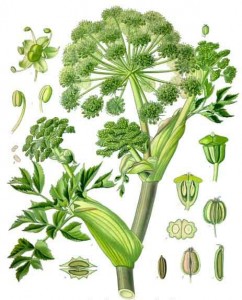 Positive identification is essential, when collecting wild species, because it resembles some poisonous members of the carrot family. Originally a native of northern Europe, the Angelica herb is often grown as a garden herb. The wild American Angelica herb or (angelica atropurpurea) is similar in appearance to the above except for its purplish stems. It has similar medicinal properties and uses. Many of the reputed applications date back to Medieval times.The Angelica herb, was believed to protect against contagious diseases, ward of evil Spirits and enchantments, as well as bestow long life.

Around World War I, people chewed on the Angelica herb roots in the belief that it would protect them from the influenza epidemic. Also known as Arch Angel, this herb has been used as a remedy for stomach disorder, Heartburn, Gas, Colic, Colds and Fever,

The Angelica herb in all its applications has a warming effect, useful in treating respiratory inflammations such as asthma and bronchitis, The Angelica herb has antibacterial and anti fungal properties. One of its ingredient agents (coumarin) has been tested for these effects.

In some applications the Angelica herb is believed to increase sexual desire and aids in reducing PMS. The traditional Chinese medicine uses about 10 different Angelica herb species, the most used is the Sinensis, which in China is Dong Quai, (woman’s ginseng) a blood tonic. The whole plant is aromatic, but only the roots of the Angelica herb are used in the Swiss, Austrian and German Pharmacopoeias.

The leaves of the Western Angelica herb, are prepared as a tea or tincture, to treat coughs, colds and bronchitis, the respiratory discomfort. The preparation from the leaves are gentler than those from the roots.

A tincture is a mixture of alcohol and herbs, very concentrated. A typical recipe is to take 7 oz of herbs to 2 pints of vodka, cover tightly and keep it for 14 days in a warm place, then strain it and store it in a dark bottle. Since only a small amount is necessary for treatment , it may be diluted with water.

Preparation made from the roots of the Angelica herb are used as an appetite stimulant and digestive problems.

The essential oil derived from the Angelica herb is used in making perfumes, skin and hair products and for food flavoring.

A tonic from the Angelica herb root and Gentian herb taken before a meal promotes digestive secretion and better absorption of nutrients. The Angelica herb is more beneficial for a woman then a man and it is best and safest to take it in a combination of other herbs, like in the KM from Matol.

Christa Haseloff  -After my husband passed away of an incurable cancer I started to research the medicinal herbs and put a web site together so I can share this info with others who might enjoy reading it.

Craft Projects You Can Make Out of Your Christmas Cards