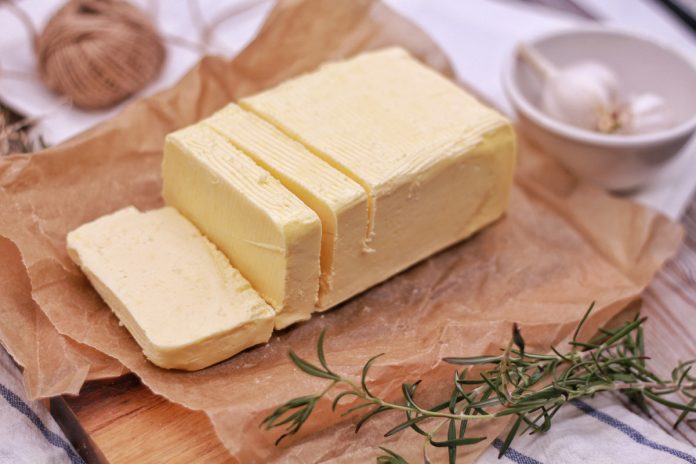 “He (Sisera) asked water, and she (Jael) gave him milk; she brought forth butter in a lordly dish.” ~ Judges 5:25, The Bible. Butter always manages to make the weight conscious souls shriek.

Truly divine is the taste of butter which has the potential to render even the simplest, most ordinary tasting loaf of bread into a creamy pleasure. Even boiled rice with a healthy helping of butter and some salt can become the most delicious of concoctions. However, to make this rich, creamy, thick and malleable delight, milk fats need to be shaken vigorously for sometime. In fact, the Palestinians took to filling up goat hides with milk, billowing them, stringing the opening shut and then swaying the sack on a pole, in order to derive butter in the early decades of the 20th century. So, before the worry of the fat content of butter starts to plague those creamy thoughts in your head, hold your horses and find out all about butter food ingredients and what potential effects they might have on you.

What are the Ingredients in Butter?

Butter, essentially a dairy product made by vigorously agitating fresh cream, is largely a colloid of milk and water in a matrix that consists of 80% butter fat in the US. The rest is milk solids and water. But butter made in the United Kingdom may contain anything between 82% – 88% of butter fat and usually 15.6 – 17.6% of water in their cultures where the butter is known popularly as “dry butter”. This form is generally concocted from cow’s milk but can be derived successfully from sheep, goat or yak milk as well. Other than the butter manufactured for commercial purposes, traditionally churned butter has lesser amounts of fat of about 65% and a water composition of 30%. A particular variety of butter produced in New Zealand is such that one can spread it on the bread (or other soft food) even when the butter is cold and does not need to be softened or melted further.

Butter, which is also widely used for lubrication purposes while cooking, like oil and ghee, can basically be of two types – salted butter and unsalted butter. With most top chefs vouching for unsalted butter making for a better seasoning, 1 gram of it generally has the following components.

All in all, it has about 36 calories and a total of 4 gms of fat in it. However, unsalted butter has no sodium, protein or carbohydrates, which are essential requirements of the human body. Unsalted butter is usually sold in aluminum foil wrappings.

Salted butter however does have some amount of sodium, given the salt present in it. However, the sodium present is definitely not substantial as a single tablespoon of salted butter comprises only 115 milligrams of sodium. But this number varies greatly owing to the fact that different butter brands have differing amounts of salt content. The usual salt content is about 1.2%. Salted butter also has vitamin A, D and E along with calcium, protein and phosphorus of about 1.2%. Rectangular salted butter cakes are wrapped in butter paper and sold in the market. If a butter brand markets its product as “reduced fat” or “light”, then it indicates the addition of gelatin and skim milk along with some water in the product. Read more on butter nutrition facts.

Even though butter naturally is either white or pale yellow hued, depending on the food consumed by the beasts, some amount of artificial coloring is used in commercially manufactured butter. Cows that are fed on grass round the year are likely to give us products that will produce a butter variety that does not change colour noticeably. Cattle consuming fresh grass in winters give us deep yellow butter in comparison to cattle who are fed stored hay. We get a very pale whitish variety of butter from the latter. Other ingredients in butter are flavors and preservatives which allow the butter to be stored for up to 6 – 9 months in a refrigerator. It is a fact that butter takes on the aroma and flavour of other food items easily, so it should be properly wrapped before storing in the freezer.

When it comes to using butter in myriad delicacies, chefs around the world are generally equivocal about the fact that the higher the quotient of fat in butter, the better it is for baking. Also, European butter is the best when it comes to whipping up sauces.

Here are some interesting and fun trivia on butter, that might just help you to enjoy butter all the more!

1. The color of marigold flowers were used to imbue butter in the medieval ages.
2. According to a news item in “New York Produce Review and American Creamery”, published on 4th December, 1907, a globetrotter came upon a method of butter storage wherein leaves were used to cover butter, on top of which a coat of cow dung was applied. This arrangement did not allow air to reach the butter within and thus, prevented the butter from getting spoiled.
3. The middle ages also saw another use of butter, wherein it served as protective wrapping material for fragile items. Breakable items were first immersed in liquefied butter. On hardening, the butter acted as a buffer for any external trauma that the items may suffer during transportation and protected them from breaking. On reaching the intended site, the butter was melted again and the brittle items were extracted.
4. Witches were believed to transfigure themselves into flying insects to steal butter from dairy keepers during the middle ages. From there sprung the name “butterfly”!
5. In the German language, the idiom “alles ist in butter”, simply means all’s well or is in perfect arrangement, and translates into “everything is in butter”.

I believe, that after all this information about butter ingredients, you have contrived that like everything else, butter pertains to the healthy factor when consumed in moderation. Obviously, you shouldn’t excessively indulge in it as it is purely made of fat, and can prove to be harmful, especially for heart patients. But it also strengthens bones and teeth when consumed in balanced amounts. So, butter it up in small doses!