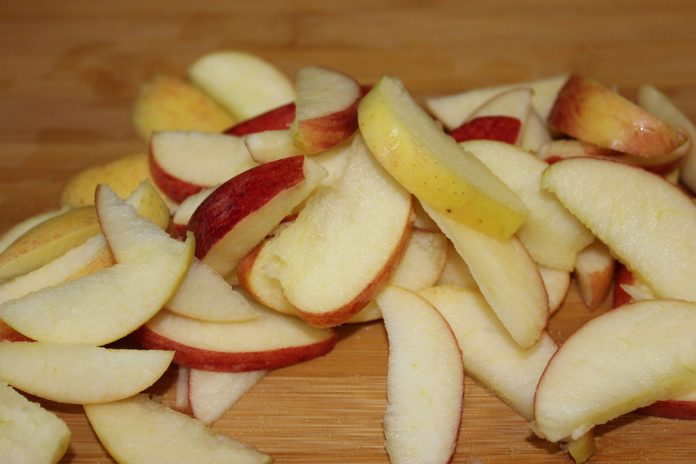 Pick an apple off the tree and it’ll last a few weeks before it starts to rot and turn soft, but fresh cut apples turn brown when iron-containing chemicals inside apple cells react with oxygen in the air. We see this every day when iron objects rust, or when scabs on cuts turn brown. The chemical reaction is called oxidation, and the enzyme that regulates oxidation in apples is called “polyphenol oxidase” (PPO), also known as “tyrosinase”. There are millions of tiny cells inside each apple. One way apple cells get exposed to oxygen is by cutting the apple open. This damages the wall that protects each cell and exposes its contents to the oxygen in the air. Bruised apples also show signs of oxidation. When an apple gets damaged–if you drop one for example–many of the cell walls inside the apple get broken, which enables the contents of those cells to flow freely inside the apple, where they react with air that is also inside the apple (apples are 20% air, that’s why they float!).

Now that we know what causes browning, how can we stop it? One common way is to put lemon on sliced apples, but this changes the taste substantially. The mixture of lemon juice and water is called acidulated water, lime can also be used. This also works for peaches, pears, and avocados.

One can also use orange juice, pineapple juice or apple juice to prevent browning. Other suggestions are Sprite or similar lemon-lime sodas, ginger ale, salted water, cinnamon, water and crushed vitamin C tablets, even dry white wine or flat Champagne! There is also a commercial product called Fruit Fresh, but like everything mentioned so far is has a distinct effect on the taste and the flavor of the sliced fruit.

Another alternative is to invest in a shrink wrap machine. Whilst effective this can be a costly investment and it constantly requires purchasing more shrink wrap.

There is one method to keep apple slices from turning brown that requires no effort at all, it’s called eggstrafresh®, and it is a revolutionary breakthrough in food preservation that is scientifically proven to dramatically reduce oxidation and retain moisture. Oxidation and moisture loss are the 2 leading factors that foster mold, bacteria, nasty odors and rapid food spoilage. eggstrafresh® is a wonderful device that allows you to eat healthy and save money too! To learn more visit http://www.eggstrafresh.com.