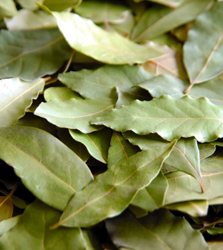 Due to the strong pleasant smell of its leaves, laurel is one of the most loved herbs in Greece. It started to be used not only as an aromatic, but also as a treatment against intoxication. Apart from the symbols attributed to it (symbol of conqueror, of glory and honor), laurel is rich in volatile oils, which give it carminative, diaphoretic, expectorant, detoxicating, and antiviral properties. It is also an efficient digestive stimulant.

Against sinusitis, laurel decocts or infusions are recommended. Against intoxication or poisoning, it is recommended to boil 20-30 laurel leaves in a cup of water and left to infuse for 20 minutes. It is also a treatment against digestive problems, by chewing 3 laurel leaves a day on an empty stomach, one before each primary meal.

Because it has antiviral properties, laurel is used as a macerated mixture for treating hoarseness and the flu. The mixture resulting from 4 laurel leaves and an orange peal macerated in 1 liter of water for 4 hours is consumed on an empty stomach in small amounts.

This herb is very effective against states of deep frustration. It wakens the mind and the senses; increases subtle perception offers a state of dynamism, expansion and can also put the mind in a state of detachment, clarity and measure. Because of its etheric aromatic taste, laurel brings harmony and equilibrium by cooling down sudden rash reactions of any sort. It purifies, decongests, eliminates everything that blocks, energizes, and stimulates the body.

Laurel is known to be a spice. Its leaves are left to dry and are used in spicing up various foods: rice, soups, foods containing vegetables and also for pickle jars

It is recommended to consume laurel in small amounts because if it is used in large doses it can cause nausea.