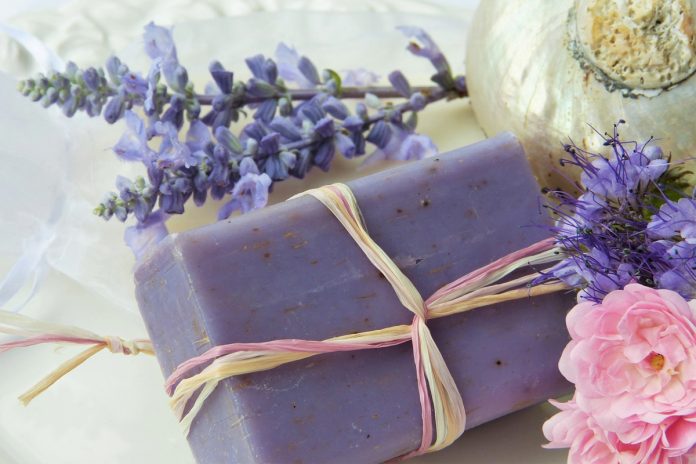 Lavender is a traditional cottage garden plant. Its gray-green spikes of foliage and purple flowers provide color all year. Since the Middle Ages, the dried flowers have been one of the main ingredients of potpourri. Fresh sprigs are included in herbal bunches known as tussie mussies, which have been used for hundreds of years to mask unpleasant odors and ward off illness.

Today, `talking bouquets` give new meaning to the popular phrase, `Say it with flowers.` A tussie-mussie or word poesy is a small circular nosegay of flowers and herbs, tightly gathered and designed to carry a special message in the language of flowers. The traditional tussie-mussie is composed of fragrant herbs surrounding one central flower, a rose. The language of flowers spans the world of the ancients from Greece and Turkey to the Aztecs of South and Central America.

In England during Elizabethan times, judges carried tussie-mussies into their courtrooms to protect against `gaol fever.` Today judges at England`s highest court, the Old Bailey, celebrate this tradition by carrying a tussie-mussie into court six times a year. During the Victorian era tussie-mussies were carried close to the nose to ward off the stench in the streets and the plague and were composed primarily of scented herbs such as rosemary, thyme, and rue. The age-old custom of strewing pungent herbs on the floors of homes was thought to protect the gentlefolk from germs and provide herbal fragrances – early aromatherapy.

The Victorians also turned flower giving into an art. It was common practice at the beginning of a courtship for suitors to give their intended a tussie-mussie. Floriography, the art of sending messages by flowers, brought a new dimension to tussie-mussies. Dozens of floral dictionaries were published listing the meanings of each flower and herb. The symbolic meanings were adapted from classical mythology, religious symbolism, ancient lore, and a bit of creativity on the part of the floral designer. The study of botany and the discovery of new plants from all over the world brought new and exciting ideas to this language of flowers.

The plant may grow to a height of 3 feet, but there are dwarf forms for edging which reach only about 10 inches. The stems are thick and woody, and become straggly if left unpruned. The leaves are long, spiky, and very narrow, and branch out near the ground. To keep lavenders beautiful year after year, prune them in early spring or fall, or at harvest. Low growing varieties should be cut back 1 to 2-inches. Taller varieties (3 to 4-feet in height) should be pruned back to approximately one-third of their height. Pruning helps to keep these plants from becoming very woody.

Fresh lavender flowers can be used to flavor syrup for jellies. Mix 6 flower heads into each pint of apple jelly syrup. Remove the lavender before bottling. It is also used to flavor fruit salad and milk and cream for deserts. Flowers be candied to decorate cakes and puddings. Use lavender instead of rosemary when cooking chicken. Lavender ice-cream is a real treat.

Use an infusion of lavender on insect bites. Dried flowers and seeds are used in herbal sleep pillows and baths for soothing and calming frayed nerves. Lavender oil applied at the temples will relieve a headache. Three flower heads in a cup of boiling water makes a soothing tea at bedtime.

Bunches of lavender are said to ward off insects. Fresh or dried flowers are used in rinsing water for clothes and hair. Dried flowers and seeds are often used in potpourri and sachets. The stems are used to weave decorative baskets.

To dry the flowers, cut them as soon as they begin to open and hang upside down in bunches in a well-ventilated area.

Melt the soap in the water in a bowl placed over a saucepan of hot water, stirring frequently, until smooth.

Crush the flowers to a powder and take the bowl off the saucepan. Stir the flowers into the soap with oil.

Store in a glass or plastic bottle.

Melt oil, butter, and beeswax in heatproof glass measuring cup, over boiling water or in microwave. (low heat) Remove from heat just before beeswax is completely melted. Finish melting by stirring in warm oil. Add the vitamin E oil and lecithin and stir in between additions. Mix rosewater and aloe together and slowly add to main mixture. Continue stirring with a small metal whisk. Once mixture is cooled, add the essential oil and stir. Store inside drawer or cabinet. Try to keep away from sun and heat. Use nightly-especially in cold or dry weather.

Vinegar of the Four Thieves

One part each {all plants are dry] Rosemary, Wormwood, Lavender, Sage, Mint