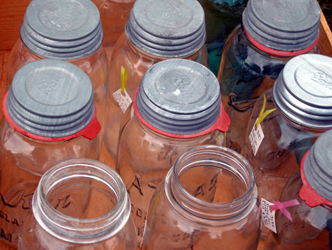 Preserving food is an age old technology discovered by humans. A lot of people would argue which is the very best process in food preservation. Generally people would like their food stuffs to be safe, of excellent quality, nutritious, fresh, wholesome, great nutritional value, nice color, good aroma, distinct flavor and texture. Food is generally classified as safe when there’s no natural danger of toxins, pathogenic-microorganisms and chemicals that could be harmful.

Food is called sterile when it doesn’t have bacteria living naturally inside of it. When food isn’t sealed and sterilized it would then create bacteria. Like milk, for example, contains bacteria living naturally within it thus spoiling its contents within 2 to 3 hours when kept outside in room-temperature. Although when it’s placed inside a refrigerator the bacteria count slows down thereby making milk last in your refrigerator for 1 week even if it already has some bacteria. Preservation of food involves the handling of your food & how it’s going to be treated which would affect the speed of spoilage whether it’s slowing down or growing fast, it could be accelerated due to the presence of microorganisms. Preserving foodstuffs means to stop the fungi growing, microorganisms & bacteria growing and also the oxidation of certain fats that will generate rancidity.

While some other processes in preservation would mean putting bacteria, yeast and benign-fungi to your food so that it’ll generate certain desirable qualities, like that of cheeses and wines. Some processes also stop food from getting discolored like in the process of oxidation or enzymatic-browning like what we see in sliced apples. Certain kinds of foods are sealed once treatment is done in order to stop another recontamination by microbes. There would also be drying wherein food is actually not stored inside any container. Other processes include freeze-drying, freezing, spray-drying, food-irradiation, sugar-crystallization, adding some preservatives, using syrup for preservation, vacuum-packing and canning.

Here are some processes in preserving food:

1) Salting Salt is better recognized as the process of curing. This type of food preservation eliminates moisture found in meat using osmosis. The meat will be combined with salt, sugar perhaps even both. Nitrates and nitrites will also cure the meat & stop ‘Clostridium botulinum’ from appearing.

3) Irradiation Exposing to ionization radiation identified as cold-pasteurization or irradiation. This process of preserving involves factors that would help in killing bacteria, insects, molds & reduces spoiling or ripening of your fruits.

4) Highly pressurized food preservation Use really high pressures. About seventy thousand worth of psi, which induces release of nutrients, maintaining the texture, appearance & the flavor while preventing spoilage.

5) Vacuum-packing Food is stored within an airless environment, like a bottle or a bag that’s air-tight. Since there’s no oxygen it slows spoilage.

6) Pickling Food is left within an anti-microbial and edible content in liquid form. Fermentation type of pickling actually uses actual food to encourage production of ‘lactic acid’. While chemical-pickling kills or stops bacteria & microorganisms found inside the liquid.

7) Burying food Since the foods are buried, it would mean lower oxygen level, light & pH-level, and provides desiccants in soil & a more cool temperature.

9) Lye Sodium-hydroxide would stop growing bacteria by generating much alkaline.

10) Canning This would involve the cooking of your food & they’re sealed in clean & sterile cans or jars. Sometimes pressure cooking would be required as a last step in this process. Meats & veggies dishes that contain low acid content should undergo pressurized canning.

11) Using controlled micro organisms Cheeses, beers & wines are kept within a very long period of time because their process of production will use micro organisms to stop its spoilage.

12) Jellying Food is preserved by solidifying and forming them into gel, like using maize flour & gelatin. Jellying will produce fruit preserves, marmalade and jellies when this process if done on fruits.

14) Drying Considered as an old method, where water is reduce to delay or prevent growth of bacterias. A lot of meats are dried, just like fruits. Millet, wheat, maize, oats, barley, rye, rice, cereal-grains, currants, raisins, sultanas and grapes are a few examples of food stuffs that uses drying to stop spoilage.

Kathy loves cooking! You can check out her very popular Best Recipes http://www.quickbestrecipes.com website where she shares some of her Best Bread Recipes and Best Cake Recipes.