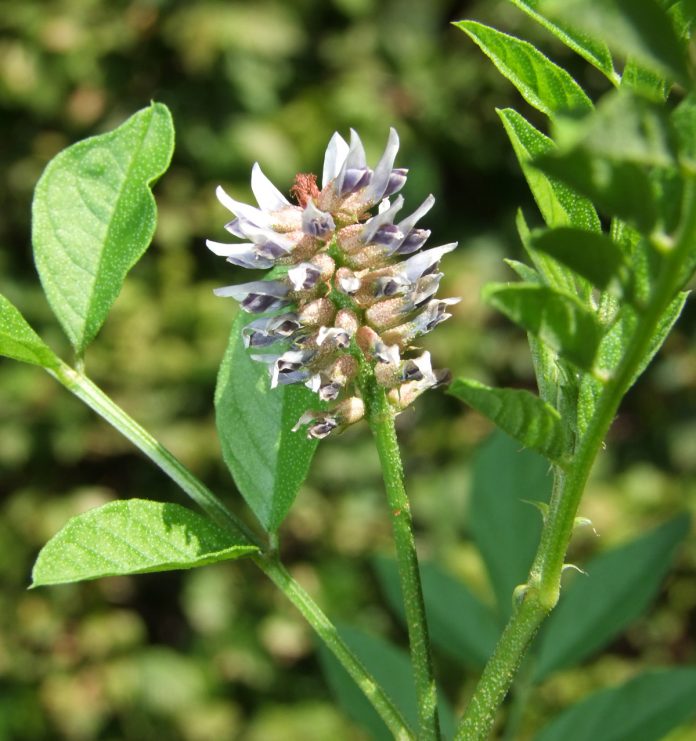 These herb garden plants have splendid dark green foliage with sprays of violet/lilac flowers. Flowering in summer the plants achieve a height of about 1.5 to 2m. The plant is grown for the roots, which are obtained from established plants from 3 to 4 years old.

Well known in ancient Rome by the name of radix dulcis – sweet root – these herb garden plants spread from the Middle East via Italy throughout Europe. Still widely grown throughout southern Europe as well as the former Soviet Union. The earliest recorded cultivation in England was in the middle of the 16th century and was taken to the New World by settlers during the 17th century.

Licorice was certainly a herb garden plant known to the venerable Mr. Culpeper and was a commercially important crop in his day. Licorice was widely known as ‘Pontrefact Rock’ after the Yorkshire district where it was principally cultivated as a commercial crop.

A liquid extract is obtained from the considerable root system of the licorice plant with its large taproots. This extract is widely used in its own right for hacking coughs, colds, catarrh, sore throats and mouth ulcers as well as a sweetener for more unpleasant tasting medicines.

Licorice herb garden plants have been cultivated for use as a mild laxative and an aid to overindulgence for over a millennium. Health shops still sell licorice in root form for its various virtues as well as for tonics.

The plastic-like strings and straps of licorice beloved of the young – and not so young – are made by reducing the root extract through lengthy boiling. Still popular to this day, it was a favorite in root form for children from about the 17th century.

Separate the roots, ensuring that your cutting has a bud. Plant out about 1m apart and 125 to 150 mm deep in a slightly damp spot with a good sandy loam and good sunshine. Timing can include either spring or autumn, but avoid any periods with the danger of frost. Although no wild plants are known to exist today, remember that these highly prized herb garden plants were initially from regions of strong sunshine so site them accordingly.

Pete Steel has grown herbs for 25 years in several different climates and soils.