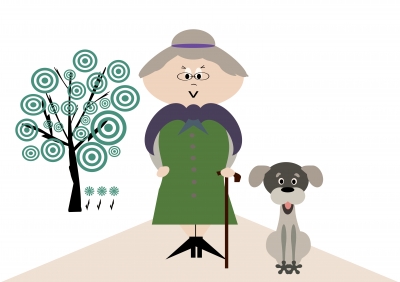 Back in the day, people who had some kind of strange, unknown ailment were generally taken to the ocean for the summer. Illnesses miraculously disappeared over a stay at the ocean. And every year like clockwork, right about the time my dad and his brothers were out of elementary school, Little Grandma would get the vapors. Now I’m not quite sure what the vapors were, but she always got them nonetheless. So at school’s end all three boys and Little Grandma would be driven to the ocean and dropped off at the small wooden cabin.

Little Grandma was a little wisp of a woman. She was 4′ 8″ with a tiny swirling mess of white hair tossed into a bun. But don’t let her size kid you. When she was at home, she could wring the neck of two squawking chickens at the same time, then chase down the headless bodies and pluck the feathers in sixty seconds flat. She’d throw them in a pot and have dinner ready in thirty minutes with heaping helpings of mashed potatoes and biscuits on the side.

She always wore her sensible black lace up shoes, which would soon come to be known in family lore as The Hammer Shoes. She wore the Hammer Shoes constantly, whatever the weather, and even when she strode along the beach. You wouldn’t catch her barefoot or even near the water. The boys would try to talk her into the water but she always said, “The only good thing that comes out of the ocean is dinner and mermaids, and you don’t need any mermaids.”

She generally had the boys under some kind of chaotic control. She had to, being the only adult figure for the summer. And the boys couldn’t put anything past Little Grandma. Before the nefarious trio could come in for dinner, she would make each of them turn out their pockets. Harold was the youngest. You could always be sure that Harold’s pockets, when turned out, were full of food and sand. He’d have bits of bacon from breakfast ‘that he saved just in case he got hungry’ intermingled with sand and bits of crust from the sandwich from lunch. One time he lined his pocket with cello wrap and tried to pour orange pop into his pocket, it didn’t work.

Richard and George, who were a little older than Harold, had entirely different contents in their pockets, which Little Grandma was always wary of. Their pockets always wriggled with something and smelled like rotten fish. Not only that, there were usually hermit crab claws sticking out of the top hem of the pocket.

Each morning, Little Grandma would feed the boys biscuits and jam, sometimes an egg with bacon, then would send them on their way for the day. “Watch little Harold!” she would yell as they went running up the beach toward the pier. Those boys would run out that door with dried milk moustaches and their hair sticking up in all different directions. “Be home by suppertime!”

George, Richard, and Harold would grab their fishing poles, a can full of worms, and run all the way to the pier. They weren’t bad boys, just full of boyness and mischief. They always thought that Little Grandma never knew what they were up to but she had her ring of spies down at the pier.

Unbeknownst to the three musky-teers, she had the summer girls (the ones who loved to tattle and gossip) give her a report every hour about her grandsons. “George pinched Harold” one of them would say, “and Harold pushed him off the pier.” “They’re catching fish and selling them for five cents apiece to the ladies with the big straw hats.” Little Grandma would secretly smile at the boys resourcefulness.

Only once did Little Grandma go to the pier to fetch the boys. One of the summer girls came to give their hourly report.

“George is waiting for Richard with a hammer,” one of the summer girls reported.

“What did you say?” asked a shocked Little Grandma.

Little Grandma stomped out of the ocean cabin with her black sensible shoes, her angry shoeprints marking her route in the sand. At first, when she arrived at the pier, she didn’t see any of the boys, only dating couples and sailors. But then her fast eye caught George crouched above the doorway to the bathroom, his shadow looking like a vulture waiting to pounce upon its prey, she noticed that he indeed had a hammer ready to drop.

Richard and Harold were nowhere to be seen and George, owing to his single-minded concentration, failed to notice Little Grandma standing about twelve feet from him, madder than a hornet. To think her grand boys were out in public acting like the Three Stooges. No one misbehaved under Little Grandma’s watch.

Then the door squeaked beneath George as Richard and Harold emerged from the bathroom. They didn’t see George above the doorway readying the big drop on Richard’s head.

They had never seen Little Grandma run before, and now knew why the chickens never had a chance. George lost his balance in slow motion as Richard and Harold stepped aside when they caught sight of Little Grandma coming at them like a torpedo. And then it happened; George landed on top of Little Grandma, her little stubby legs jackknifing into the sea air as one of her sensible shoes flew off the side of the pier and into the wide Pacific.

She grabbed one of George’s ears and with the other determined hand grabbed hold of Richard’s ear and in one fell swoop pulled them both off the ground. With as much dignity as she could muster, she limped off with one sensible shoe an ear in each little pinched hand. Now they knew how the chickens felt.

“Grandma, your shoe is floating in the water,” Harold shouted, playing the role of “the good one.”

Little Grandma didn’t say a word. She just limped up the beach with two ears and Harold trailing behind her.

George and Richard hung out around the cabin the rest of the summer, except for a few hours each morning when they would pack up their fishing poles and catch some fish to sell to the ladies with big straw hats. You see, they had to pay for a new pair of shoes for Little Grandma. And by the end of the summer, when Little Grandma had her new shoes, she made sure to let the boys know that as nice and as new as they were, they were never as comfortable as her hammer shoes.

Beth McCain loves to write about her quirky family. Beth and her husband, Lee, are instructors and lecturers in applying the Law of Attraction in life to attain what they desire.