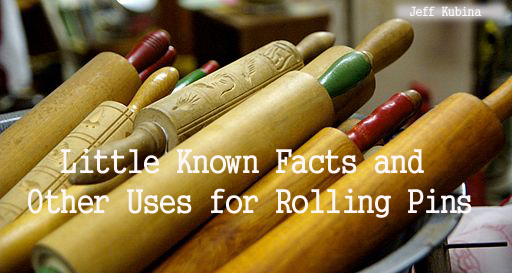 Who invented them? Why were they invented? Are they only good for rolling out bread dough and cookies? I will answer these and other… very interesting things about our need for rolling pins!

First, not to confuse the rolling pin with the bowling pin (or any other pin), the rolling pin is a utensil that has a cylindrical shape with one handle on each side that is used in the kitchen mainly to flatten out and shape dough.

According to historical records, many ancient civilizations used round pieces of wood (probably branches with the bark removed) to flatten, or smash or crush their different types of food. The old saying is true, “There is nothing new under the sun”! They also used hardened clay, and glass bottles. Obviously, the glass bottles came later. Regardless of the raw material used, it would have been an antique form of a pin compared to what we now have.

The modern wooden rolling pin is much different than the earlier styles. Not only does it now have handles, but due to the invention of J.W. Reed in the late 1800’s, the handles now roll independently of the actual cylinder. Previously (and I remember this, it must have been my Great Grandmothers pin!) the handles were just a part of the cylinder and you could not hold the handles and roll the pin. Being one unit, if you held the handles too tightly, the pin would just scrape across the top of your dough- accomplishing… well, not much! I seem to remember a big pile of dough at the end of my board! J.W. Reed must have experienced similar issues causing him to create and patent a rod that would allow the cylinder to spin independently of the handles.

I promised you little known facts. Here’s one: in the United States alone, there are between 600,000 to 750,000 rolling pins manufactured every year! Where in the world are all of these pins being used? I have found that having only one in my kitchen is plenty!

Pins are not only made of wood any longer. Glass pins are popular in Italy, in fact, they use chilled wine bottles! The French prefer marble pins on top of marble boards. Other countries make theirs hollow, filling the center with cold water. This would be similar to the Italians and the wine bottle. Here, in the United States, we have primarily used wood. Going back to J.W. Reed’s day, pine would have been plentiful and is a soft wood, easy to cut or whittle. Today, most popular are Ash and Maple. Specifically, Rock Maple, as it is a very hard wood (as you can tell by the name alone!). Ash and Rock Maple are used primarily with professional cooking schools, bakeries and high-end retail stores.

Are there any other uses for rolling pins, aside from baking and comics who portray angry housewives chasing children and husbands around the house? I found a couple. Thinking outside the box, they are great for children while doing arts and crafts. They can bring relief to aching muscles and knots. The ones with the hollow center can be filled with ice and water for bruising, or with hot water to loosen cramped muscles. You can also lie down and use the pin to roll your feet on, thus giving them a much needed massage after standing all day and baking in the kitchen!

Sharon Cacho – After living through-and surviving! some setbacks in my life, I felt hopeful again. I ran across this Hebrew word “tikvah” that means “hope”. Not “hope” as in our American watered-down version. No! It is a powerful word that literally means “confident expectation”. To me, that means that we can confidently expect a new adventure, a new reason, a new day, a new future. I adopted this word and used it for my business. I want to bring hope to others through my business, my life.

3 Substitutes for Ingredients in Cooking