Of all the insects in the garden, the ladybug is probably the most easily recognized. Ladybugs, also called lady beetles or ladybirds, are a gardener’s best friend. Not only do they feed on insect pests, especially aphids, but their bright coloring also brings cheer into the garden.

Attracting them into your garden requires some planning but can help immensely with your pest control. However, if you just don’t have the space to plant the types of plants that ladybugs like, releasing commercially bought ladybugs can help you clean up infested plants while you work to establish your own population. 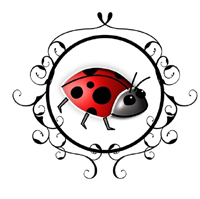 Adult lady beetles are usually oval or domed shaped, and can range in colour from red to orange. The number of black markings can also range anywhere from no spots to 15 spots. Some species are even solid black or black with a red spot (the Twice Stabbed Lady Beetle).

Both adults and larvae feed on many different soft-bodied insects but aphids are their main food source. One larva will eat about 400 aphids during its development and single adult can eat a whopping 5,000 aphids in its lifetime. In addition, they will also eat other insects such as mealybugs and spider mites as well as the eggs of the Colorado Potato Beetle and European Corn Borer.

Within a year, there can be as many as 5-6 generations of ladybugs as the average time from egg to adult only takes about 3-4 weeks. In the spring, adults find food and then the females lay anywhere from 50-300 eggs. The tiny eggs are yellow & oval shaped and are usually found in clusters of 10-50, near aphid colonies. The eggs take 3-5 days to hatch and the larvae voraciously feed on aphids for 2-3 weeks before they pupate into adults.

In the fall, adults hibernate in plant refuse and crevices. They often do this en masse where several hundred adults will gather at the base of a tree, along a fence row or under a rock. They especially like areas where leaves protect them from cold winter temperatures.

Attracting Ladybugs in the Garden

Apart from aphids, ladybugs also require a source of pollen for food and are attracted to specific types of plants. The most popular ones have umbrella shaped flowers such as fennel, dill, cilantro, caraway, angelica, tansy, wild carrot & yarrow. Other plants that also attract ladybugs include cosmos (especially the white ones), coreopsis, and scented geraniums, dandelions.

Apart from planting attractive plants in the garden, you can also promote ladybug populations by cutting back on spraying insecticides. Not only are ladybugs sensitive to most synthetic insecticides, but if the majority of their food source is gone, they won’t lay their eggs in your garden. As difficult as it may be, allowing aphids to live on certain plants is necessary to ensure that there is enough food for ladybugs. In addition, resist the urge to squish bugs & eggs in the garden, unless you’re certain that they are not beneficial.

Sometimes, there just isn’t enough room in the garden to have ladybug-attracting plants or you or your neighbour may have been over diligent with the pest control. In certain circumstances, purchasing ladybugs can help to control a severe problem or help a population become established.

Scientists have found that indoor-reared ladybugs fail to find their own food when released outside so the majority of commercially available ladybugs are collected from the wild. Before releasing them into the garden, here are a few tips to help ensure that they stay where you want them:

1. Only release ladybugs after sun down or before sun-up. Ladybugs navigate by the sun and in the evenings & early mornings, they tend to stay put.

2. Pre-water the area where you are releasing them. Not only will the ladybugs appreciate the drink, free-moisture on the leaves helps the ladybugs to “stick” to plants.

3. In the warm months, it helps to chill the ladybugs in the fridge before releasing them. Ladybugs tend to crawl more than fly in colder temperatures and the overnight stay in the fridge won’t harm them in anyway.

4. On severely infested plants like roses, drape a floating row cover or thin sheet over the plant and release the ladybugs underneath. Within a day, the ladybugs will have found the aphids and will be happily munching away at them.

One Note: The Asian Ladybug

If you are planning to purchase ladybugs for your garden or greenhouse, I encourage you to select the native ladybugs species, Hippodamia convergens, rather than the Asian ladybug, Harmonia axyridis. Although the latter is very effective at controlling aphids and is often the species of choice for commercial greenhouse growers, it is the main cause for “ladybug infestations” inside houses.

While the native ladybug is happy to hibernate outdoors, the Asian species requires warmer temperatures and often ends up becoming a pest to homeowners as it congregates in large numbers inside. In addition, it seems to be establishing fairly large numbers in the wild and there is some concern it will begin competing with the native species. Some suppliers of predatory insects do sell both species and it’s best to choose the native one if you can.

Arzeena is an agronomist and garden writer with Organic Living Newsletter.

For more information on ladybugs, here are some great University websites: