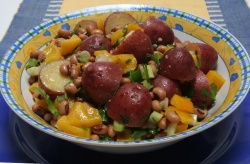 So are you a potato salad or a coleslaw person? Few people, I find, are equally enthusiastic about both.

When I was a caterer, I served potato salad much more often than coleslaw. If the menu included both, guests ate far more potato salad, as much as five times more. Informal questioning as to why people skipped the coleslaw produced the same answers pretty consistently, namely, “I just love potatoes,” and “raw cabbage disagrees with me.”

When diet gurus started demonizing “simple starches” like potatoes and promoting low-carb diets, I knew people would never give up spuds completely. So I began creating dishes that I called “potato-plus.” That meant offering combinations that lowered the glycemic load of the entire dish, and constructing recipes where the nutritional value of the potatoes was pleasingly augmented by other foods.

For mashed potatoes, easy solutions included retaining the potatoes’ nutritionally rich skins, and then also smashing in broccoli, spinach, other green vegetables or winter squash. For potato salad, I took the same tack, keeping the skins as much as possible. Over time, I have lost count of how many other ingredients I have added to my potato-plus salads, but they have included flaked canned tuna, shrimp and other seafood, chopped hard-cooked egg, diced apple, nuts, and a cornucopia of vegetables.

For better potato salads, start with the most nutritionally dense potato varieties. In vegetables, color is usually a sign of phytochemical value, so this means favoring yellow- or purple-fleshed ones. When a white potato is called for in a recipe, for example, go ahead and use red-skinned ones, unpeeled.

Next, add some protein and fiber. In this Southern-accented salad, black-eyed peas do both. Finally, add lots of chopped vegetables and herbs, and keep the dressing lean. I like to use a vinegar-based one, but combining low-fat mayonnaise with yogurt or buttermilk is good, too.

Place the potatoes in a deep saucepan and add cold water, covering them to a depth of 2 inches. Over medium-high heat, bring the water to a boil. Reduce the heat to medium and cook until the potatoes give some resistance when pierced with a thin knife, 12-15 minutes. Drain potatoes, return to the hot pot, and shake until dry. When cool enough to handle, cut the potatoes into quarters and place in a mixing bowl.

Add to the potatoes the black-eyed peas, celery and yellow pepper and mix with a fork to combine. In a small bowl, whisk together the vinegar, sugar, mustard, salt and pepper until the sugar dissolves. Whisk in the oil. Pour the dressing over the potato mixture. Add the parsley and scallions. With the fork, toss until the salad is well-coated with the dressing. Cover and let sit at room temperature 20 minutes to allow the flavors to meld. If not serving immediately, refrigerate for up to 8 hours. Let the cold salad sit at room temperature 20 minutes before serving.