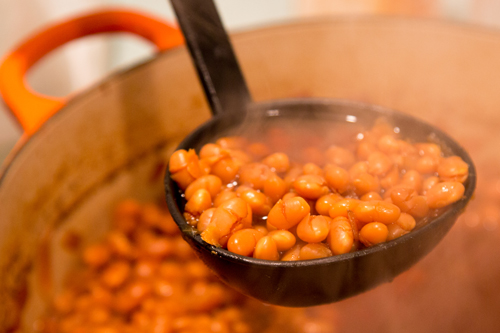 Throughout its history, Boston has been linked to beans. Surely the lowly legume is not the sort of association city forefathers would have sought when striving to cast their city’s mark in the New World. But find each other they did — as evidenced by the names Beantown, Boston baked beans, Beanpot Hockey Tourney and the Boston bean pot, among others.

It hasn’t been until the 1900s, however, with its emphasis on healthy eating, that the homey image of a bubbling pot of beans has gained cache. Beans are of the moment, the very definition of what our food should be about — carbohydrate and fiber rich.

As anyone who’s ever done the cooking for a Boston ham-and-bean church supper will tell you: the ideal method for cooking beans is in a bean pot in the oven – to make Boston Baked Beans in the authentic old fashioned way. For that deliciously slow, sweetly fragrant baking, you want traditional pots and sturdy stoneware protecting your beans from burning or overcooking, while keeping them moist and tasty.

Soak beans overnight in a large sauce pan in 6 cups of water. Add baking soda. Heat to boiling and simmer 10 minutes. Drain in colander over a large bowl. Save liquid.

Bake 2 hours at 300 degrees. Add the rest of the water and stir again. Bake additional 1-1/2 hours (or until beans are tender). Uncover last 1/2 hour.

The Pot Shop of Boston is a family owned and operated business that was established in 1959. This retailer is most noted for the creation of The Original French Chef Omelette Pan with Julia Child as well as the “Official” Boston Baked Bean Pot. http://www.potshopofboston.com