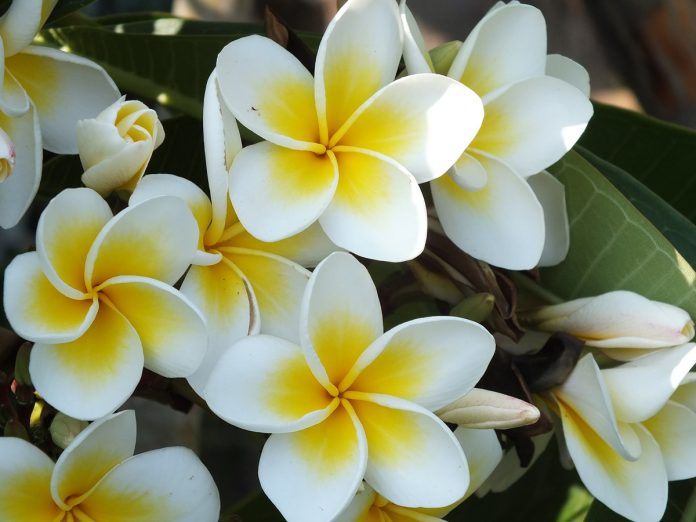 Plumeria plants are gaining more and more popularity worldwide as more information about growing and rooting methods become available. For the average gardener it is important to understand the lingo he/she encounters when reading about tropical plants, plumeria plants in particular.

This is part one of a multiple part series of terms for plumeria gardeners. The list of terms is in alphabetical order and can easily be filed for future reference. This reference series is very helpful when communicating with other knowledgeable plant lovers and gardeners . By using the same terms describing issues about plumerias moves the discussion along since these terms have you speaking the same language.

Following are the terms that are helpful knowing when reading about plumeria plants, and plants in general.

Anther is the male reproductive part of flowers. This is actual the part which contains the pollen. Anthesis describes the time and the process of budding, including the opening of flowers. One synonym for Anthesis is blossoming. Apical bud is the terminal bud which develops at the tip of the branches. Axis is described as the angle between the upper surface of the leaf and the stem to which it is attached.

Buds are small bulges, knobs, or swellings on stems or branches. These buds contain an undeveloped flower, leaf, or shoot. This general term covers all the multiple type buds, not just the ‘flower bud’. Bud drop is the premature dropping of the flower buds before they had a chance to fully open.

Callus is the thickened tissue which is developed by woody plants to cover cuts. Cambium can be described as a ring of tissue which is found in woody seed plants. Cork is produced on the outside of the ring and primary tissue on the inside. This primary tissue is composed of thin-walled cells. Chimera is a genetic mutation in plants. It can cause part of the plant or all of the plant to have a different appearance when compared to the original plant. Chlorophyl is the green pigment of plants which traps the energy of the sun for photosynthesis. Cork is described as the outer layer of the bark. Corolla is the term used to describe all petals of one flower. Cortex is the outer portion of stems and roots. Cotyledons are the first emerging leaves of seedlings. Cotyledons are not considered “true” leaves. They provide the seedlings with nourishments until the true leaves have developed.

Damping off is the premature demise of seedlings which is many times caused by overcrowding and overwatering of seedlings. Deciduous plants are plants which lose their leaves during a specific season.

Evergreen plants are plants which maintain their foliage throughout the year.

Floral envelope describes all sepals and petals of one flower. Floret is an individual flower in a flower cluster. Floriferous is the term used for plants which flower abundantly. Flowers are reproductive structures of some seed bearing plants. Fungus is a collective term for a wide variety of organisms which reproduce by spores. Fungicide is described as any toxin which kills or prevents the growth of fungi. Note: fungi is plural for fungus.

Hermaphrodite is any bisexual plant which means that the flower contains both stamens and pistils.

Indigenous plants are plants which grow naturally in a particular region. Inflorescence is the term used to describe a flower cluster or a characteristic arrangement of flowers on a stem. Insecticide is any chemical substance which is used to kill insects.

Part One covers letters “A” through “I”. Part Two of this Plant Terms Series will begin with the letter “J”. Stay tuned for Part Two with the remaining alphabetical listings of terms and definitions from the world of plumeria plants and tropical plants in general.

Unusual Uses for Your Summer Greenhouse

Five House Plants To Grow in a Sunny Position