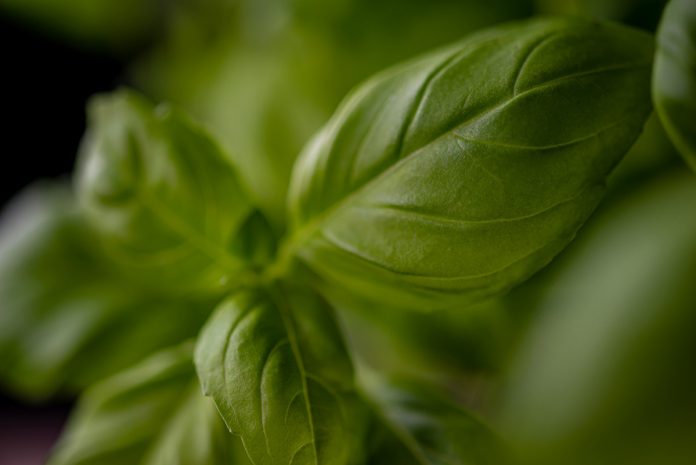 Most popular herbs can be raised from seed sown indoors during early spring.  A few, like peppermint, benefit from a long season of growth and can be sown earlier if conditions are suitable. It is important with all species to ensure that at the time of sowing the ratio of heat to light is balanced, otherwise sickly, etiolated seedlings will be produced. When conditions are not suitable it is preferable to wait a couple of weeks until things improve.

Although the resulting plants might not be quite as large, they will be healthier and better balanced. This problem is particularly acute when a window ledge is used. The seedlings quickly germinate because of the warmth provided in the room, but with the poor daylight that is a regular occurrence during early spring, they become drawn and scrawny. The ratio of light to temperature is so variable and out of balance that the seedlings never make satisfactory progress.

Seeds being raised indoors should always be sown in flats or pans of good seed compost. It is foolish to go out into the garden and scoop up ordinary soil for seed raising. Even though such soil may look quite reasonable, it is likely to be of too poor a structure for use in flats and pans, and also be infected with pathogens that cause problems like damping off disease.

Herb seed is full of vitality with the main aim in life being to germinate and produce a healthy plant. It should not be hampered by poor compost. The plants that are raised will directly reflect the quality of the compost in which they are being grown.

Seed composts differ from potting soils in that they have few plant nutrients in them. The lack of fertilizer ensures that there is little likelihood of the tender seedlings being ‘burned’ and helps to dissuade the establishment of troublesome mosses and liverworts that frequently invade the surface of seed flats. Soil-based composts are ideal for raising herbs, but most of the quicker germinating kinds ultimately make better plants if they start life in peat-based soil-less compost.

Soil-less composts that consist of just peat, but with nutrients added, need handling carefully and it is necessary to be very selective about the kind of seed that is sown in them. Unless a very smooth surface can be assured once the flat is filled, it is unwise to sow fine-seeded herbs like hyssop and peppermint in such composts. The fibers in the compost create air pockets in which tiny seeds can become stranded.

Peat-based composts are ideal for larger-seeded herbs like fennel and angelica. Smaller-seeded kinds are much better in those soil-less composts that have sand mixed in with the peat. No matter what the preference may be, always use a good branded growing medium. It is both cheaper and safer to purchase ready-mixed compost rather than to try to create an independent self-mixed formula.

The pans or flats should be filled with seed compost to within 1/2in of the rim. Soil-based composts should be firmed down before sowing, but the peat types merely need putting in a pan or flat, filling to the top and then tapping gently on the potting bench. This, together with the first watering, will firm the compost sufficiently. Firming down soil-less composts only succeeds in driving out the air and making them hostile to root development.

It is essential with all composts to firm the corners and edges with the fingers when filling a seed flat. This counteracts any sinking around the edges and prevents the seeds from being washed into the sides where they will germinate in a crowded mass. Seed compost should be watered from above prior to sowing. This is particularly useful with the soil-less types as it settles the compost and allows any surface irregularities to be rectified before sowing takes place.

The seeds of most herbs can be sprinkled thinly over the surface and then covered by about their own depth with compost. Large seeds, like those of borage, can be sown individually with regular spacing so that there is no need for pricking out once they have germinated. The majority of herb seeds need darkness in order to germinate satisfactorily.

Some of the finer-seeded kinds are difficult to handle and distribute evenly over the surface of the compost. By mixing a little fine dry sand with the seed they can be more easily distributed. Not only does the sand serve as a carrier for the seeds, but it also indicates the area of the compost over which they have been scattered. Fine seeds should only be watered from beneath.

Stand the flat or pan in which they have been sown in a sink or bowl of water and allow the compost to dampen. Overhead watering can be disastrous, often redistributing the seed to the edge of the pan and scouring the surface of the compost.

All herb seeds benefit from bottom heat, so when there is a soil-heating cable available for early spring sowings make full use of it. Warm compost promotes the rapid germination of most herb seeds and is particularly useful for gardeners who raise their plants in an unheated greenhouse.

Where no heat is available a sheet of newspaper placed over a seed tray will act as insulation and creates a warmer micro-climate. Although light can penetrate the paper, it is important to remove it as soon as the seeds have germinated. With all seedlings light is vital, so as soon as they appear, place them where they can receive the maximum amount. This will ensure that they develop into stocky, short-jointed plants.

Young seedlings of many herb plants, especially sage and rosemary, are very vulnerable to damping-off disease at this stage and watering should be carefully regulated. This unpleasant disease is prevalent in damp humid conditions, invading the stem tissues of the seedlings at soil level, causing them to blacken and then collapse. Prevention is better than cure, so as a precaution water all emerging seedlings with a suitable fungicide. This provides the seedlings with some protection.

All seedlings should be pricked out as soon as they are large enough to handle. Crowded seedlings being separated and individuals spaced out at regular intervals in pans or flats. Ideally seedlings should have their seed leaves fully expanded and the first true leaf in evidence before transplanting.

Seedlings must be handled very carefully, as they are delicate and often brittle. Never be tempted to hold a seedling by its root or stem as irreparable damage can be caused. Always hold it by the edge of the seed leaf. Rough handling at the pricking-out stage can lead to the spread of damping-off disease and the arrival of other pathogens.

With most seedlings it is usual to plant them slightly lower in the compost than they were in the pan or flat in which they germinated, generally burying the stem up to the level of the seed leaves. This should only be done to vigorous healthy seedlings. It is not a method of reducing the height of seedlings that have been drawn up by insufficient light.

Seedlings must be pricked out into potting soil. For most quick-growing herbs a standard soil-less potting mixture is adequate, but for the others soil-based potting soil is preferable. Providing that there are no sharp temperature fluctuations and there is always plenty of light, the young plants should develop well.

Apart from greenfly, few problems are likely to be encountered until the plants are either potted up individually or planted out. These pests are easily controlled with a systemic insecticide while the plants are young and the foliage is not being used for culinary purposes. There are small aerosol cans of suitable insecticide available for handy use.

The most critical time for young herb plants is the period when they have to be eased away from their comfortable greenhouse or kitchen window ledge atmosphere and placed in a cold frame before facing the reality of the open garden. A cold frame is obviously ideal, for in bad weather the frame light, or top, can remain in place, whereas if the weather warms up it can be removed completely.

The aim of this hardening-off process is to give the plants a tolerance of the lower temperatures of the garden over a period of two or three weeks, without causing a check in their growth. The procedure is for the frame light to be raised slightly to permit ventilation, this gradually being increased until it is removed entirely during the day. It can then be raised at night as well to allow further ventilation, gradually increasing this until the frame light is removed entirely.

The plants should then be ready to take their place in the herb garden. When a frame is not available, a similar effect can be achieved by taking the plants outside during the day and standing them in a sheltered place, returning them indoors each night until it is felt safe to leave them outside both day and night.

Philip Swindells has over 40 years gardening experience. A former botanical garden curator and an international horticultural consultant, he has worked extensively in the UK, North America, the Middle East and Australia. The Author of more than 50 gardening books, he has been awarded a Quill and Trowel Award by the Garden Writers’ Association of America.