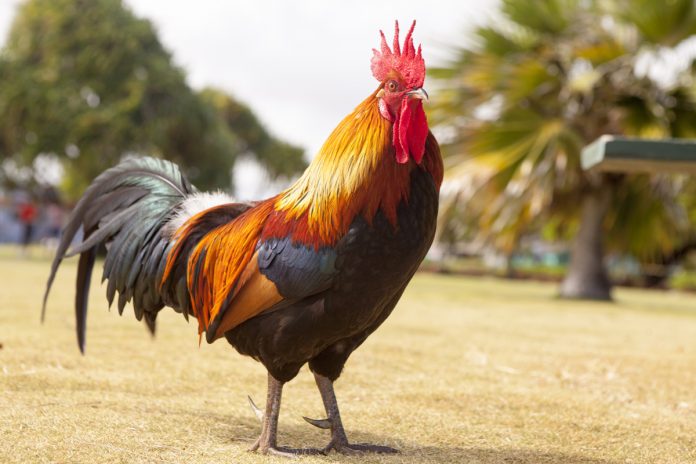 Our twenty five acre tobacco farm was in the eastern part of North Carolina. We were not rich by any stretch of the imagination in fact I suppose looking back we were very poor. Tobacco farming was very hard work and all eight of us had to work from dawn till near dark just to keep food on the table. I was the youngest boy and I had a great deal of work to do. I can remember wearing overalls most of my childhood and wearing my brothers hand me downs.

We always had cows, horses, pigs and chickens to supply most of our meat and eggs. I found out very early that there but be a rooster if you have laying hens but I never really knew why. I was told if you have chickens then you have to have at least one rooster. This is where old Raleigh our rooster comes into the picture.

Raleigh was a male chicken and we wanted our chickens to give birth to beautiful tiny little baby chickens and keep the chicken farm growing, we needed a few roosters on our chicken farm. Though roosters are capable of driving hens crazy at times, the only way we were going to get fertile eggs for a hen to nest on is to have a rooster in the pack. When Raleigh got attracted to one of the hens he would do a little vaudeville dance and skitter sideways opening up his wing feathers like an oriental fan. Raleigh was the grand protector of the chickens. He would not allow any dogs or critters to invade the chicken pen. I saw Raleigh jump on a dog’s back once holding on with his razor sharps claws. He gave that dog a run for his money. Of course Raleigh won the battle and the dog never came back to our farm again. When the hens were nesting, Raleigh would go into full alert mode and protect the hens and all the eggs. He was worse than an attack dog.

The nature of Raleigh was quite amazing . When we got a new rooster, Raleigh would call for a fight. The winner was the boss of all the chickens and determined the pecking order. Raleigh was always the winner and didn’t accept any others messing around with his women. He was known as the king of the flock and was first in all matters. He was the one who got first pickings of the hens and no other rooster would dare challenge him. If one did happen to do so it was a very foolish thing because he would be reminded by the boss with a good beating. So Raleigh remained king of the hill at our house for years. None of the other roosters would dare challenge him for he was so big. He just thought he could whip up on anyone or anything at anytime.

This brings me to my encounter with Raleigh. Since it was my job to feed the cows, gather the eggs and milk first thing every morning I was up about the time Raleigh was up. He would just strut around the yard and try to chase me away from gathering the eggs. I’d throw something at him and make him leave but he didn’t always want to leave. He was trying to have a duel with me. He’d sneak up behind me and jump on my back. Several times I just threw him off but he gave me a good scratching a few times. I told him if he did it again we would have him for stew but I still watched him out of the corner of my eye. Dad liked old Raleigh and didn’t want me messing around with him so I had to be careful. Dad loved to watch him do his dance and wave his feather out just showing off for the hens.

It happened one afternoon after a big rain. I loved to play baseball and I would go outside and pitch my ball against the barn trying to increase my accuracy and speed. I saw old Raleigh come strutting out there where I was. I was ready for him if he chose to jump on me. He just stood watching and I continued to hit the barn.

Then out of no where Raleigh came running after me. He chased me all around the yard and he was pretty fast on his feet. I hid behind the smokehouse to get a good position. When I saw him coming I drew back and let the ball go as fast as I could. Old Raleigh made a weird noise and fell over like he was dead. Just then I saw Dad come pulling up in the driveway and I knew if he saw Raleigh he would give me a whipping. So I ran, grabbed Raleigh and threw his limp body in the rain barrel. He head went in first! The plan was to leave him there until Dad went inside, then I could dispose of his body. To my surprise Raleigh came to, made an awful squawking noise and jumped out of the rain barrel. I must have knocked him out that day but Raleigh never again ran after me. I guess he thought I was the boss now and he was second in the pecking order.

Sybil Shearin is a published author, writer and poet from North Carolina. She has been awarded many awards for her poetry and now her short stories.