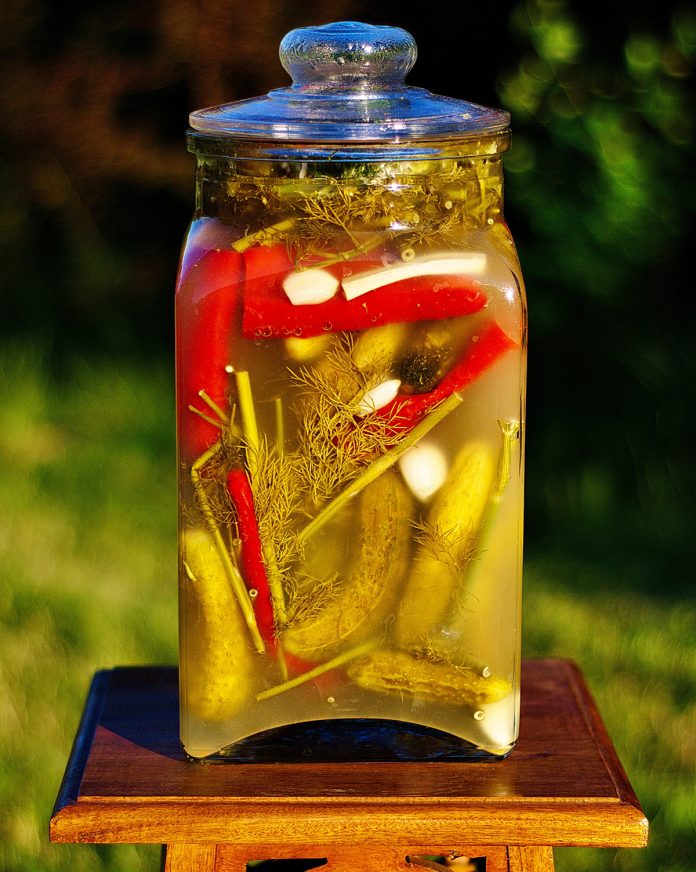 Years ago in Sacramento, California, I ran across an old man selling pickles at a swap meet. He made the pickles in his own kitchen in large plastic barrels and sold them on week-ends. I went to this swap meet every Saturday all during the summer and noticed the lines of people gathered in front of his booth, but I always walked by.

Then, one Saturday, I stopped. He had many types of home made pickles, with bite-sized samples of the various pickles laid out for tasting. They were all good but when I tried the Hot, Garlic, Dill Pickle… I was hooked. So, for what would have been the equivalent of about six dollars in today’s money, I bought a quart of pickles served up in a cardboard Chinese take-out carton. They were the absolute, best pickles I had ever tasted.

I made pickles myself several times over the years, but they were nothing special. In fact, pickles from the store were better. I thought, if only I knew how he made them, I could make my own. But I was sure he would not give out his recipe since he made his living selling them. So, I never asked.

Instead, I went through every recipe book in the library looking for pickles. I tried dozens of recipes, but never came close to the old man’s formula.

Several years passed with me buying pickles from the old guy until one Saturday, he was not there. Nor was he there the next Saturday. So, after several weeks, I went to the Swap Meet Office and asked what happened to the pickle man. As I feared, he had died.

So, I accepted the fact that I would never taste those fabulous hot, garlic, dills again. Until, one morning, as I was reading the Sunday paper, I spotted a small article on “The Pickle Man Passes Away”. The old man’s daughter provided her father’s life story and to keep his memory alive, she included his best pickle recipes. She felt that he would want his pickles to continue being enjoyed.

Of course, I made the pickles that same day and they were perfect. They were the old man’s pickles!

Since they were so simple, I wondered why my efforts over the years were never as good as his. After much thought, I concluded that the secret is not only the ingredients, it is also the procedure.

The first secret is, FRESH INGREDIENTS.

Like the pickle man, I grow all the ingredients, except salt and vinegar, in my own back yard. The cucumbers are picked and processed within one hour of leaving the garden. Likewise, with all the other ingredients. I am convinced that this freshness adds a little extra something to the flavor and crunch of the pickles.

Another tip is in the processing (hot water bath) of the pickles. The cucumbers are processed only a short time so they are not “cooked”. While experts on canning may quarrel with the procedure (I do not know), I have made (and sold) pickles for years this way.

>>Get all the canning tools you’ll need

O.K., ready for the recipe? A note first: this recipe assumes you are familiar with the basics of canning food. If not, you should probably read an article on canning before making pickles (many available on the web).

Quantities of ingredients vary according to how many pickles you want to make. It will be clear as you read the procedure below.

FRESH cucumbers (how many?…how many pickles do you want to make?)

NOTE: Select cucumbers that are about 3-5 inches long, with no blemishes! You can use any type cucumber, not just pickling cucumbers. I have always made the pickles using whole cucumbers, like the Pickle Man did. I have never tried slicing the cucumbers (length-way). I believe this would take away some of the crunch.

2. In a LARGE pot, combine two quarts water, 1 1/2 cups salt, two cups white vinegar. Bring to a boil until all the salt is dissolved.

4. Fill jar with cucumbers (previously washed in cold water) and pour hot vinegar mix in jar to within 1 inch of top.

One good thing about making your own pickles is that you have control over how they taste. You like them hotter? Add more jalapeno or 1/2 teaspoon crushed red pepper. You want them milder? Use only 1/2 jalapeno. You like strong garlic flavored pickles? Use 5 garlic cloves per jar.

The point is, do not be afraid to adjust the recipe to make the pickles you like. The recipe above is basically the original and what I like.

You can start by making just one jar (use original ingredients for salt/vinegar mix, even if making only one jar). The pickles can be tasted in about 3 days and you can adjust the ingredients to your taste when making a full batch. Just be aware that all the flavors will intensify slightly over time.

Final note: The grape leaves give the pickles their crunch. You may have trouble finding fresh grape leaves, since they do not sell them in stores. If you can not grow your own or have a neighbor that grows them, I do not have a solution. I would not use alum as a substitute in my pickles. You will still get a pretty good crunch without the grape leaves if you do not over process.