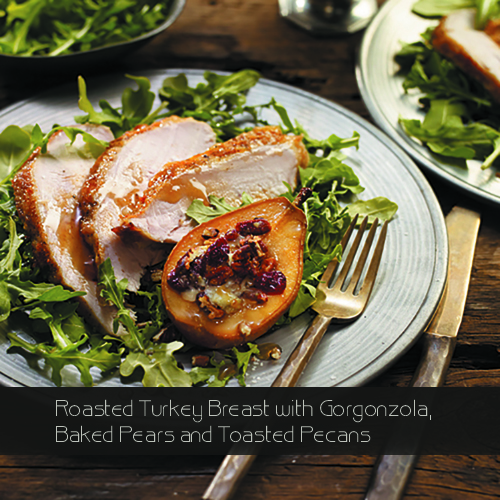 Host the perfect family dinner with a show stopping main dish that will be sure to impress. Try topping your turkey with this beautiful balance of sweetness and richness with the combination of crisp pears and punchy gorgonzola cheese.

Peel the pears and slice them lengthwise into halves. With a small sharp paring knife and a melon baller, remove the core and seeds from each pear, leaving a round well for the filling. Trim a small slice away from the rounded sides of each pear half so that they will sit in the baking dish without wobbling. Toss the pears with some lemon juice to prevent them from turning brown. Arrange them, core side up, in a baking dish large enough to hold the pears snugly.

Gently toss the crumbled gorgonzola, dried cranberries and pecans together in a small bowl. Divide the mixture among the pears, mounding it on top of the indentation.

In the same small bowl, combine the apple cider, chicken stock, and brown sugar, stirring to dissolve the sugar. Pour the mixture over and around the pears. Bake the pears, basting occasionally with the cider mixture, for 30 minutes, or until tender. Set aside until warm or at room temperature.

Thanksgiving Hacks You’ll Be Grateful For

Reasons to Give Your Thanksgiving Turkey Italian Flavor