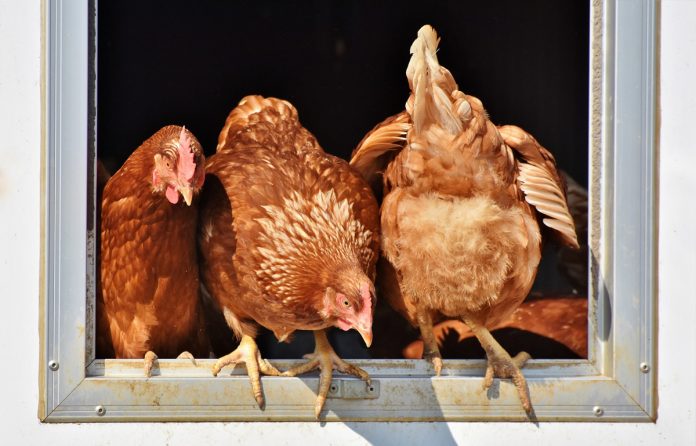 It’s a fact if a chicken is scared or excited; their egg production goes down the tube. With more citified folks attempting to grow their own food, those who have decided to raise chickens may need to know how to protect them from harm. Like my friend in Maryland who decided to raise Rhode Island Reds and Buff Orpingtons, many varmints other than humans like to have a nice chicken dinner.

My friend, working late preparing for a presentation at work, suddenly heard excited squawking and clucking coming from the chicken coop in the back of the house. At 2:30 in the morning, the chickens should have been asleep.

A masked invader had crept into the chicken coop through a small hole in the fence which protected the poultry from critters lurking in the night. In the daytime it prevented the hens from wandering around in the nearby woods.

Living in a rural area on a small 15 acre farm there is always some form of firearm standing next to the door, so she grabbed a pellet gun and ran out the door toward her chicken coop. As she approached the pen, she saw a large raccoon with a dead chicken its mouth fleeing through a small opening in the fence. Firing the pellet gun did no good; the raccoon turned around and sneered at her as it fled to the woods.

The chickens were running through the yard clucking and squawking and generally going nuts. There is no fast way to calm a scared chicken, except through feeding. Once she determined this, she threw a few handfuls of chicken ration on the ground and the flock attacked it with gusto. The night became quiet as the birds concentrated on the feed.

While the birds were eating, she viewed the carnage left by the raccoon. Counting the bird snatched by the raccoon, she had a total of three killed and one limping around with blood running down its leg. It would die too. She found two of the birds sleeping in a nearby tree, afraid to spend the night in a dark chicken house.

Here is what my friend did to help keep her chickens safe and laying eggs on a consistent basis:

• Repair all holes and torn places in the fence.
• Build the hen house sturdy enough to keep unwanted animals outside.
• If you have trouble with hawks in the daytime and owls at night, stretch chicken wire or bird netting on top of the enclosure you have provided for the chickens. This should keep any bird of prey, including buzzards, out of your poultry pen.
• Make sure there are no wide spots in the fence next to the gate for your flock to get out or predators to get into the enclosure.
• Keep the chickens in their house at night. It’s a big scary world out there in the dark with all kinds of predators roaming the area. Make the birds feel secure.

Predators of all types lurk around a chicken coop. Foxes, coyotes, dogs, feral cats, raccoons, possums, snakes and birds of prey have a passion for a chicken dinner. Raccoons will kill several, then decide which one it wants to eat. It’s your job to make sure that it has a hard time getting to the chickens!