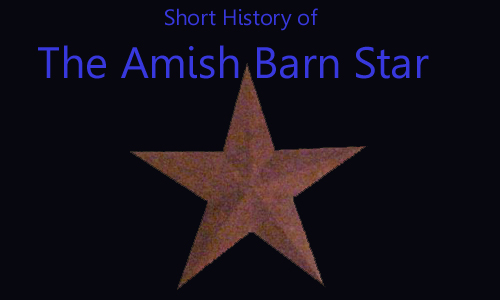 In researching the history of the Amish Barn Star, I have found that there is as much folklore as there is fact.

In North America we must go back at least 300 years; when groups of religious refugees from Germany migrated to South Eastern Pennsylvania for religious freedom. Many of these refugees were Amish and Mennonites, ‘people of plain dress’, along with Lutherans and other Reformed groups of more worldly dress that were called ‘ people of fancy dress’. As time passed these people became know a ‘Pennsylvania Dutch’.

The “fancy” settlers painted colorful geometric patterns on their barns. Many were floral designs, birds and yes, stars, many of them look like a quilt patch. The people assigned specific meanings for each symbol. Somehow through time the geometric symbols evolved through the Pennsylvania Dutch farmers as ‘hex’ signs. They were to bring the families good luck. Along with the debate of the hex signs, they became a six-pointed star designs and it became very popular. Since the German word for six, is “sechs”, which sounded like “hex” to their english speaking neighbors. Soon the “hex” pattern became commonly known as the hex signs. Which they are still called.

Because of the six points in the hex signs they soon became six pointed stars, now they are best known as Amish Barn Stars. The barn stars changed over the years and they were made from wood, and you could attach them to any barn or building you wanted. In the ’70’s craftsmen started using roofing tiles, which gave the starts a rough finish. After the 1900’s we find the use of thin sheets of steel to create these popular garden art. If they were left unpainted they turned to a rustic look which became very popular.

Many people believed that the barn star was a sign of good luck to farmers, and there are still many people who believe that today. Today many people just use them as a popular piece of décor on their garden walls or the sides of their homes.

In Pennsylvania the Amish barn stars became very popular after the Civil War. Some stars were aesthetic, but many times they represented the specific barn builder. The first Amish barn star was a three-pointed star but they have changed through the years. Many of the stars that were painted on the barns can be dated back to the 1850’s.

The folklore back then was in the colors that the star was painted, protection, emotions, purity, and good luck. These colors or the folklore of the colors have no biblical substance or influence.

Fran E Kestner  – Even though I could no longer work away from home my mind was just not ready to give up working all together. Since I was born in Coshocton County, Ohio not far from the Amish Communities I fell in love with their products and way of life at a very young age.