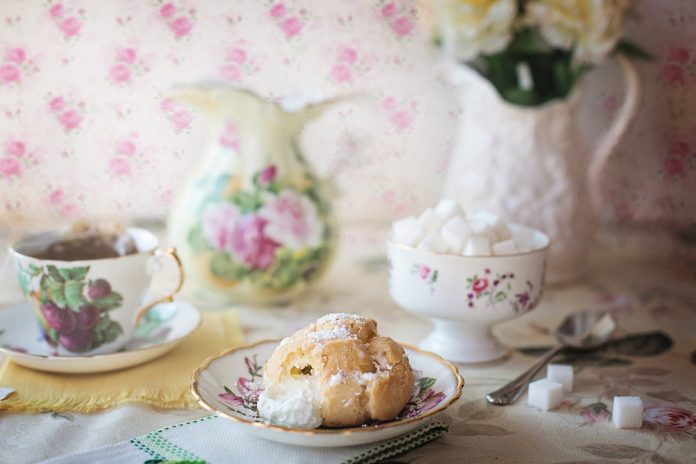 Back during the turn of the century, there were so many different traditions, questions on what to say or do, or how to behave in certain situations that are closely related to tea cups and tea. Many of them have faded into the past like so much vapor, while some still hang in the air like smoke. These are still in use by those who still practice the art of daily tea time.

How about the expression, “Take tea” which is still heard in old nursery rhymes and repeated by our mothers, who heard our grandmothers say the same thing? Who knows how many generations back it goes? During Victorian days, however, to “take tea” was considered to be quite the rude expression! You “drank tea” back then, if you were a member of the upper crust.

Having tea was considered a formal occasion in those days, especially if it took place as a type of reception, though no one would dare to call it that! You were there to see and be seen – oh, and to drink tea as well. But, not to eat. It was considered vulgar for a lady to eat in public, even though food was served. A lady merely nibbled, and not much of that, either. The menu for these teas was rather sparse, as was the custom. Small sandwiches, muffins, and little cakes was about all you were offered. The non tea drinkers in the crowd had a choice of hot chocolate, orangeade, or lemonade.

Lovely porcelain tea cups and saucers were used on these occasions, and the prettier, the better to impress someone. A tea was the place for the neighborhood ladies to figure out who stood on which rung of the social ladder, who was teetering and about to slip down a rung or two, and who was climbing their way to the top. A lot of planning went on before, during, and after a tea, but not usually during. Oddly enough, not much talking went on at these teas, even if the occasion is a rather informal one.

If the tea is held outside at what is termed a “garden party”, one would be able to discern a bit more friendliness and chattiness, but not much more. People of the Victorian era seemed to always have a reason for everything they did. They would stand around with their teacups in one hand, small plates in the other hand, and watch the people around them as if tongue-tied. They were rigid in their desire to do every little thing correctly, be it spreading jam on one of the miniature biscuits that were served, or wondering if it would be proper to ask for a second serving of tea. Etiquette was very important – more important than the outcome of the party!

Happily, a great deal of this stiffness and stodginess has disappeared along with the Victorian days. No worries anymore about holding up ones pinkie finger to balance the teacup, making sure that you place your napkin in the proper place to let your hostess know that you would it enjoy it very much if she invited you back, or wondering which side of the table to place your spoon on after using it to stir your tea. Even so, there are still several rules of etiquette that you should follow if by chance you are invited to an afternoon tea.

If you are at a tea with a group of people, sitting at a table having a good time, and you suddenly realize that you must visit the restroom, how do you tactfully let the other guests know that you will be back momentarily? Simply place your napkin on the seat of your chair! More napkin “language” – Watch your hostess and her napkin. When she puts her napkin in a loosely folded blob on the left of her plate, you know that the tea is over.

If the hostess has forgotten her etiquette and you find large chunks of lemon on the table for tea instead of thin slices, ask for a lemon fork, or if all else fails, a seafood or even a regular fork! The idea is to use it to squeeze the lemon juice into your tea, and then discard the rind. Never float a large chunk of lemon in your tea cup!

Don’t start in on the refreshments, no matter how tempting they seem, until everyone has been served their tea. And, make certain your are holding your tea cup in the proper way! You don’t necessarily have to hold up your pinkie, but bend your index finger and thumb to grasp the handle. Don’t slide your finger through the handle like you are putting on a ring. It doesn’t look very nice for you to sip your tea out of your spoon, and don’t leave the spoon sticking up out of your tea cup! Instead, place in in your saucer, underneath the handle of your teacup, which should be on the right side – not the left.

When you are done with your tea and any refreshments you may have had, don’t go over and dump your dirty plate and cup back on the tea table if everything was served buffet style. That’s a big no-no. Instead, ask your hostess what to do.

So many rules just to drink a cup of tea and eat a couple of cookies! It almost makes you want to stay at home and have a nice cup of tea at your kitchen table – your way!