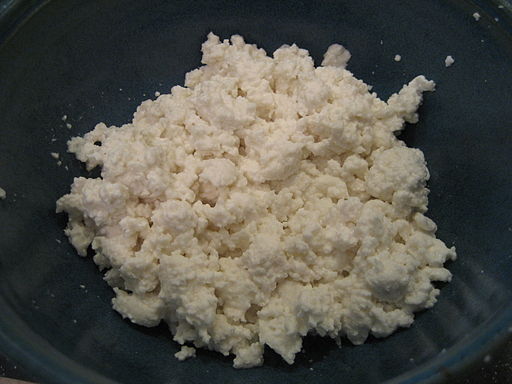 The making of Cheddar cheese and brick cheese is, of course, done commercially, but there is a kind of cheese that can be made very conveniently in the home. This home-made cheese, which is generally known as cottage cheese, affords an excellent way in which to utilize left-over sour milk, particularly if a quart or more can be obtained at one time; smaller quantities can generally be used for baking purposes. If properly made, such cheese is very digestible. As it can be seasoned and served in a variety of ways, it makes a delightful addition to lunches or other light meals in which a protein dish, such as meat, is undesirable. Skim milk does very well for this kind of cheese, so that if the sour milk that is to be used has cream on it, the cream should be removed before the cheese is made; otherwise, it will remain in the whey and be lost. In case cream is desired to improve the texture and flavor of the cheese, it should be added after the cheese is made.

To make cottage cheese allow a quantity of sour milk to clabber, that is, become curdled, and then place it on the back of the stove in a thick vessel, such as a crock, until the whey begins to appear on the top, turning it occasionally so that it will heat very slowly and evenly. Do not allow the temperature to rise above 90 degrees Fahrenheit, or the curd will become tough and dry.

Remember that the two things on which the success of this product depends are the flavor of the milk used and the proper heating of it. No difficulty will be encountered in the heating of the milk if a coal or a wood stove is used, but in case a gas stove must be used, the vessel containing the milk should be placed in a larger one containing warm water and the milk should be heated in this manner until the curd and the whey begin to separate. At this point, pour off all the whey possible, and turn the curd into a cloth bag or a colander lined with cloth, wash it with warm water and allow it to drip again. Then season it with salt to suit the taste and, provided cream is desired, add it at this time, using sweet or sour cream. To work in the cream, press it into the curd with a spoon until the cheese is quite smooth. Cheese made in this way may be flavored with anything desirable. For instance, chopped pimiento, parsley, olives, or nuts improve the flavor of the cheese very much and make a very appetizing combination. The dry curd mixed with any of these makes a delightful salad when it is pressed into balls, garnished with lettuce, and served with salad dressing.

Another Variety of Cottage Cheese

Another variety of cottage cheese can be prepared by using sweet milk and forming the curd with a junket tablet (rennet), one tablet being required for each quart of milk. To make cheese of this kind, heat the milk until it is lukewarm, or not over 98 degrees Fahrenheit, and then add the junket tablet dissolved in cold milk or water. Keep the milk warm until the curd forms, and then break up the curd with a spoon and pour the whole mass into a bag or a colander lined with cloth. When all the whey is drained out, the curd, which will be sweet, can be seasoned in any desired way or mixed with cream and served. If more flavor is preferred, the curd may be allowed to sour or may be mixed with sour cream.

A slight variation from the cottage cheeses just described is buttermilk cream cheese. This cheese is formed from the curd of buttermilk, which is finer in texture and not so likely to become tough as that formed from ordinary sour milk. To prepare buttermilk cream cheese, warm the buttermilk slowly, being careful not to allow the temperature to rise beyond 100 degrees Fahrenheit. As the milk is heated, the curd will form and will gradually sink to the bottom of the vessel. After this occurs, remove the whey and mix the curd with a little thick cream. The result will be a mixture having a delightfully creamy consistency.

Cheese does not lend itself readily to many ways of serving, still it frequently adds zest to many foods.

When grated, it may be passed with tomato or vegetable soup and sprinkled in to impart an unusual flavor. In this form it may also be served with macaroni and other Italian pastes, provided cheese has not been included in the preparation of such foods.

When sliced, little slices may be served nicely with any kind of pie or pastry and with some puddings, such as steamed fruit puddings. Thin slices or squares of cheese and crackers served with coffee after the dessert add a finishing touch to many meals.

It will be well to note that crackers to be served with cheese should always be crisp. Unless they have just been taken from a fresh package, crackers can be improved by placing them in a moderate oven for a few minutes before serving. Also, firm crackers that do not crumble easily are best to serve with cheese, water crackers being especially desirable.

Because cheese is a highly concentrated food, it is generally considered to be indigestible; but this matter can be remedied by mixing the cheese with other foods and thus separating it into small particles that are more readily digested. The way in which this may be done depends on the nature of the cheese. Any of the dry cheeses or any of the moist cheeses that have become dry may be grated or broken into bits, but as it is difficult to treat the moist ones in this way, they must be brought to a liquid state by means of heat before they can be added to other foods.

The cooking of cheese, however, has an effect on this food that should be thoroughly understood. It will be well to note, therefore, that the application of heat to the form of protein found in cheese causes this food substance to coagulate and harden, as in the case of the albumen of eggs. In the process of coagulation, the first effect is the melting of the cheese, and when it has been brought to this semi liquid state it can be easily combined with other foods, such as milk, eggs, soups, and sauces. In forming such combinations, the addition of a small amount of bicarbonate of soda helps to blend the foods.

Another characteristic of cheese that influences the cooking of it is that the fat it contains melts only at a low temperature, so that, on the whole, the methods of preparation that require a low temperature are the best for cooking these foods. However, a precaution that should be taken whenever cheese is heated is not to cook it too long, for long cooking makes it hard and leathery in consistency, and cheese in this state is difficult to digest.

As has already been learned, cheese lends itself very readily to a large variety of cooked dishes. For instance, it may be grated and sprinkled on the top of mashed or creamed potatoes and then browned by placing the dish in the oven.

When it is grated or sliced, it may be arranged between the layers of macaroni or other food used to make a scalloped dish.

Soups and sauces flavored with cheese are especially appetizing, a cream sauce of this kind served over toast or rice making an excellent luncheon dish.

Toast or crackers spread with cheese and placed in the oven just long enough for the cheese to melt are delicious to serve with a salad course or with tea.

To assist in the preparation of such combinations, as well as other cheese dishes, a number of recipes are here given. In making up these recipes, it will be well to note that unless the variety of cheese is stated explicitly, use should be made of American Cheddar cheese, or, as it is often called, American cream cheese, or store cheese. Of course, some similar hard cheese could be used if desired, but the kind mentioned is recommended for the sake of economy.