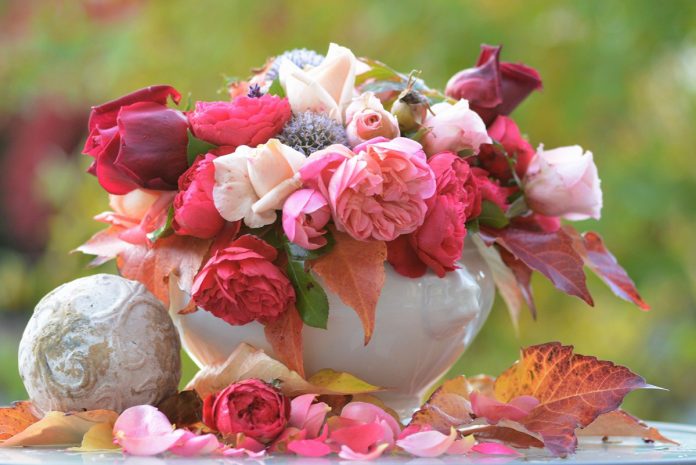 The history of roses begins long before one would imagine. Roses were here long before the first human beings set eyes on them, fell in love with them and began writing about the genus Rosa in song and poetry that celebrated their romantic beauty in color and form. They were here millions of years before the first gardeners began creating the world renowned public and private gardens that further enriched humanity’s love affair with the 150 species that were spread throughout the Northern Hemisphere of planet earth.

When rose gardeners and afficionados across the United States begin preparing their gardens and/or attending the Spring Flower Shows that highlight the latest Floribunda, Grandiflora, Hybrid Tea and Polyantha rose plants, may these fossil finds make an imprint on their mind on what a special plant and flower they are working with.

It is believed that the genus Rosa originated in central Asia some 60 to 70 million years ago and from there spread over the entire Northern Hemisphere. Roses grew wild throughout the Northern Hemisphere in what we now call Asia, Europe, Northern Africa and North America. Roses grow wild from as far north as Alaska and Norway and as far south as Mexico and Egypt.

With the arrival of human beings the garden cultivation of roses began some 5,000 years ago, probably in the area of China. Confucius, about 500 B.C., wrote about roses growing in the Imperial Gardens and noted that the library of the Chinese emperor contained hundreds of books about roses.

In the ancient Middle Eastern and Western civilizations the oldest identifiable rose today, Rosa gallica, whose exact origin is unclear, traces its appearance to the twelfth century B.C. where the Persians first connected the rose to be a symbol of love.

Rosa damascena, Damask rose, whose well-known fragrance is a rich part of the rose plant history, dates back to 900 B.C. The ancient civilizations of the Phoenicans, Minoans, Egyptians, Greeks, Romans and the surrounding mediterranean cultures all grew and traded in roses. These traveled trading routes made the genus Rosa one of the most desirable plants to have that created the beautifully renown gardens for the most famous leaders of the world at that time, including Alexander the Great, King of Macedonia. Alexander the Great is credited for introducing cultivated roses into Europe, and maybe North Africa as well. Throughout the history of Western Civilization the rich and famous cultivated roses, including Charlemagne, the Holy Roman Emperor, who grew roses on the palace grounds at Aix-la-Chapelle in Aachen, Germany.

The Greek scientist, educator and writer Theophratus is credited with compiling the first known detailed botanical description of roses around 300 B.C. for the Western Civilization. His excellent work, Historia Plantis, gained him the title “father of botany”. This work was the primer for all cataloging of roses, even for today’s rose plants, including Floribunda, Grandiflora, Hybrid Tea and Polyantha roses.

The significant discovery of the North African rose plant, Rosa damascena semperflorens, Autumn Damask, around 50 B.C. is considered one of the first hybrids. It is believed to be a cross between Rosa gallica and Rosa moschata, the musk rose. It was the first and only repeating bloomer known to Western Civilization until the 18th and 19th centuries when roses from China were introduced to Europe. It also may have been the first naturally cross-pollinated rose plant.

Another important early rose is Rosa alba, the white rose, made famous in the War of Roses by the House of York, England, in the Fifteenth Century. Rosa alba and its relative roses are believed to have been formed from some combination of the following roses, including Rosa gallica, Rosa damascena, Rosa canina, and Rosa corymbifera.

Through travel, trade and conquests these varieties of Rosa alba spread throughout the regions of the Mediterranean and the Middle East. The rose and rose gardens had a prominent place in the Roman Empire where public records reveal that there were some 2000 public gardens throughout Rome before it collapsed in 476 A.D.

It was the Benedictine Monks in their monasteries that are in a large part responsible for keeping the roses thriving during the tumultuous post Roman Empire years throughout Europe with the continuous onslaught of invading Barbarian forces of the Visogoths, Huns, Vandals and others. Benedictine Monks in particular became the center of botanical research growing and studying plants for a variety of medicinal purposes.

The history of rose plants, Floribunda, Grandiflora, Hybrid Tea and Polyantha roses Part Two will continue in the 17th Century when the interest in the genus Rosa was rekindled with new discoveries from around the world and increased with the maritime expeditions of the English, French, Dutch, Portuguese and Spanish to the New World and Far East.