The Dream Catcher – Respect For The Sacred 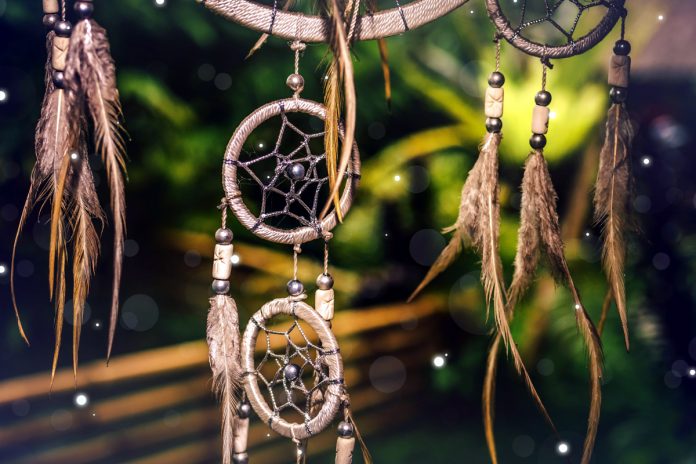 Because we are all connected in the web of life, everyone is affected, to one degree or another, by the energies that surround us and the thought forms of others. Some people are more susceptible to these thought forms just as some people are more “open” to negativity than others. Generally such people are more vulnerable at night when their guard is down and, as a result, bad dreams occur. For these people there is a “medicine” that works to protect them in this vulnerable state and it is this sacred medicine.

It was the venerable spider who taught the Indian people the proper way to make and use the dream catcher. Traditional ones are made from willow picked near the water on a full moon, generally in the spring. The willow is bent into a circle where a web is formed using sinew. Proper dream catchers begin with thirteen tie points, in honor of the thirteen moons of the Indian calendar. It is tied only at night because prayers are made during the tying and the veil between the spirit world and us is at its thinnest during this time. Also since the dream catcher works at night, it is imbued with the spirit of the night realm and its helpers.

After the tying of this medicine, a “prayer tie” or several prayer ties are made. I offer a word of caution here. Prayer ties are very powerful and only people who have the proper knowledge should make them. An entire article could be written on prayer ties but suffice it to say that prayer ties are neutral. They are charged with positive or negative energy by the person tying them and you could unwittingly cause more harm than good. Both prayer ties and dream catchers should be made by people with this knowledge or under the instruction of such a person.

Next a feather, bone or some other part belonging to a totem animal is tied to the dream catcher so that its spirit can work with the person.After the dream catcher is tied in this manner it is placed at the head of the sleeping person. During the night, dreams, energies and thought forms other than your own pass through the dream catcher. All of the negative energy is “caught” in the web while the positive is allowed to flow through. In the morning the sun’s light transmutes the “dark” into light.

After a year (thirteen moons) it should be taken down and burned, preferably by the one who made it and if necessary, a new one made.

The dream catcher is a sacred tool and powerful medicine. It is not a decoration to be hung from the rear-view mirror of the car… or on a living room wall because it looks cool. This only takes away from the dream catcher’s power.

I offer this article on a topic that may have been better served by a book as there is so much history and so many things that go into a dream catcher. But I hope this serves to increase your understanding of this sacred medicine. It is through understanding that respect is found and respect is the way of honor.

Ralph P. Brown (also known as Tawennihake) is a Mohawk Indian of the Akwesasne tribe. Ralph draws inspiration from his native culture, nature and his unique perspective on the world and his spirituality

Best Flowers for a Winter Wedding