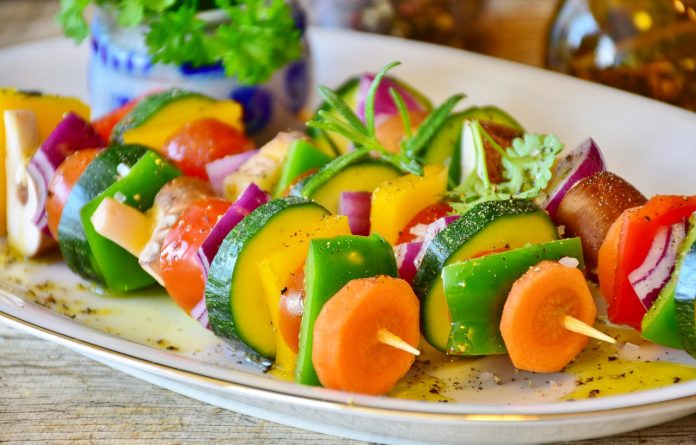 Early man has known that his Creator has made provision for healing dating back five thousand years ago. The first recorded writings of Indian culture called The Veda’s document man’s knowledge of healing through nutrition. Bible scriptures from thirty five-hundred years ago show man divinely inspired to write, “God would bless his food and water and take sickness from among them” (Exodus 23:25). As a nutritionist, I have witnessed thousands of patients be restored to health from disorders ranging from gastric disturbances, intestinal conditions, type II diabetes, hypertension, obesity and the list goes on. By developing a healthy nutritional lifestyle we can bring a balance and harmony back to our human existence and it can begin with the next meal you eat.

To understand the healing power of your next meal, you must have a basic knowledge of the process foods we eat have on digestion, absorption and elimination. Digestion of carbohydrates begins in the mouth, both by mechanical breaking down of food and chemical digestion through the salivary enzyme amylase.

In the stomach, gastric juices consisting of hydrochloric acid and pepsin start to digest proteins, and the partially digested food turns into a paste like substance called chyme. As the chyme is released into the small intestine, digestive bile from the liver, gallbladder and pancreatic enzymes, along with enzymes from the exocrine cells in the mucosa of the small intestine complete the digestion of proteins, carbohydrates and fats. The digested food is now absorbed by the intestinal wall lining called the villi and enters into the blood stream. The nutrient void food then moves into the large intestine, where there is an absorption of water and electrolytes and the formation, storage and elimination of feces.

I have walked you through the digestive process because maintaining good gastrointestinal and intestinal health depends on proper digestion. The following factors eating slowly, regular scheduling of meals and balanced macro-nutrition (30% protein, 50% high fiber, low glycemic carbohydrates and 20% essential fatty acid fats), can restore health to stomach lining and improve detoxification function of intestines. This will prevent unnecessary entrance of toxins into the blood and maintain good colon health.

Each healing meal should also provide essential micro-nutrients (vitamins, minerals, enzymes and important phytochemicals from plant-based fruits, vegetables and whole grains). These photochemicals though classified as nonessential are receiving much of the
recent scientific research moving us from the mind-set of foods preventing deficiencies, to foods healing a disease and promoting longevity.

Plants, like humans, are susceptible to disease and viruses and have developed their own protective substances, called phytochemicals. Mounting research reveals that many phytochemicals also protect humans from cancers and diseases. The following is a list of foods, which provide protective plant chemicals and the conditions they protect us from, and the research to support its claims.

The best sources are wheat, rice, barley, oats and rye. Whole grains are the seeds of the plant and consist of an outer shell called the bran, the middle called the endosperm and inner called the germ. Whole grains are excellent sources of folate, B vitamins, magnesium, iron, copper, zinc, chromium, phosphorus and Vitamin E. Folate helps decrease levels of the amino acid homocysteine in the blood. High levels of homocysteine in the bloodstream are linked to risk of heart disease. Whole grains contain phytochemicals called phytosterols, phenolic acid and lignans. Studies have shown that whole grains reduce risk of several cancers, type II diabetes, they lower cholesterol, reducing the risk of heart disease and they reduce inflammation, lowering risk of cardiovascular disease. In a recent study at University of Utah, Dr. Martha Slattery found that high intakes of whole grains, especially high fiber cereals, reduced the risk of rectal cancer by 31%. A high fiber diet (more than 34 grams daily) reduced rectal cancer by 66%. In a recent study at Tufts University, Dr. Nicola McKeown reported participants who consumed at least three servings daily of whole grains are less likely to develop insulin resistance and metabolic syndrome which are precursors of type II diabetes and cardiovascular disease. Whole grains are an excellent source of fiber, both insoluble and soluble. In a resent study reported by Harvard School of Public Health, Doctor Qi and colleagues found that women with diabetes that consumed more whole grains, bran and cereal fiber had lower blood vessel inflammation that has been linked to heart disease.

They are part of the largest group of phytochemicals called flavonoids. They are characterized by dark colored fruits and vegetables and the best sources are, blueberry, strawberry, cranberry, bilberry, blackberry, apples, red and black grapes, eggplant, peppers, broccoli and onions. There are more than 4,000 flavonoids and are broken into subgroups called, anthocyanidins, proanthocyanidins, polyphenolic acid, quercetin, ellagic acid and tannins. Studies show that dark colored fruits and vegetables are powerful anti-oxidants, some have fifty times the antioxidant activity of both vitamin C and vitamin E. Studies show that flavonoids in fruits and vegetables reduce the risk of arthritis, atherosclerosis, diabetes and cancers. They protect the collagen protein in joints and blood vessels from free radical damage, which reduces edema, varicose veins and hemorrhoids. A resent study reported by Cornell University showed the flavonoid, quercetin in apples could protect the brain against neuro-degenerative diseases like Alzheimer’s and Parkinsonism. This was a follow up to an earlier study at Cornell University by professor Lee, who found that the photochemical in apples and berries has a stronger antioxidant protective effect than Vitamin C against colon and liver cancer cells. Blueberries have 40% more antioxidant than the next highest strawberries. Neuroscientist, James Joseph from Tufts University, discovered in addition to fighting disease and cancer, blueberries prevented short-term memory loss that accompanies aging.

They are in a group of vegetables that include beans, peas, lentils and soybeans. Legumes are rich in folate and fiber. They become a complete protein when combined with whole grains like, rice, wheat, barley and oats. Legumes are packed with the phytochemicals, phytosterols, saponins, lignans and isoflavones. Legumes help prevent breast, prostate and colon cancers. Soybeans contain substances that destroy beta carotene and vitamin B-12 and vitamin D. Beans and peas have an anti vitamin D compound. It is a good practice to balance the consumption of legumes with fresh fruits and yellow and dark green vegetables to provide beta carotene Vitamin B-12, and whole grain cereals. Recent findings from the University of Illinois under the direction of Professor Singlstary, show saponins found in soybeans, garbanzo beans and navy beans, reduce risk of colon cancer. Isoflavones found in soybeans, chickpeas and other legumes gained attention, when researchers reported women in Japan and China who eat diets high in isoflavones, reported fewer menopausal symptoms and lower incidence of heart disease and osteoporosis, than Western women who consumed less. Studies show the high soluble fiber in legumes lower cholesterol levels. Lima beans, kidney beans, navy beans, soybeans and other legumes can all help lower your cholesterol, according to James W. Anderson, M.D., an expert in cholesterol research who is professor of medicine and clinical nutrition at the University of Kentucky College of Medicine in Lexington. The reason these high-fiber legumes are so effective is because they also contain pectin. In one study, Dr. Anderson asked men to eat 1 1/2 cups of cooked beans a day. The result? Their cholesterol plummeted 20 percent in just three weeks.

They are in a group of fruits and vegetables called carotenoids. Carotenoids are found in all plant foods. In simple terms, the greater the intensity of color, the higher the level of carotenoids. Carotenoids are rich in antioxidants and are found in tomatoes, sweet potatoes, oranges, grapefruit, summer squash, along with many others. Carotenoids contain the phytochemicals, alpha-carotene, beta-carotene, lycopene and lutein. Carotenoids provide many health benefits which include growth and repair of tissue and help our bodies fight bacteria and infection. Some carotenoids can be converted to Vitamin A, especially the beta-carotenoids. As potent antioxidant, carotenoids prevent free radical cells from damaging DNA, through oxidation. This is an important factor in cancer prevention. Studies show that carotenoids may lower risk of heart disease, stroke and help to avoid diverticulitis, cataracts and macular degeneration. A six-year Harvard Medical study of 48,000 men, showed that the phytochemical, lycopene found in tomatoes reduced risk of prostate cancer by 34% over men who eat less. The study also showed the processing of the tomato into sauce or paste, increased the lycopenes bio availability.

They are from the plant family called Brassica, which consists of broccoli, brussel sprouts, cabbage, cauliflower, kale and several others. Cruciferous vegetables contain a sulfur compound called glucosinolates. When glucosinates are chopped or chewed they release the phytochemicals; isothiocynantes and indoles. High intakes of cruciferous vegetables have been associated with lower risk of lung cancer and cancer of the colon. It’s believed that glocosinalte hydrolysis may alter the metabolism of sex hormones in a way that inhibit the formation of a hormone influenced cancers like prostate and breast cancers. Resent studies from Georgetown University Medical Center, under the direction of Fung-Lung Chung have found that glucosinolates help to both eliminate carcinogenic toxins in the body and encourage the self-destruction of precancerous cells. Researchers from Fred Hutchinson Cancer Research Center in Seattle reported that men who eat 1.5 cups of cruciferous vegetables a week can reduce the prostate cancer risk by 40%. Researchers concluded the phytochemical, isothocynates help produce enzymes that destroy cancer causing cells.

They come from the subgroup of cruciferous vegetables called thiosulfonates. They are found in onions, garlic, leeks and shallots. Unfortunately they are looked down upon because of their strong sulfur odor, but what might keep your friends away is what keep the bacteria and viruses away. They contain the phytochemical allylic sulfides, which block the activity of toxins produced by bacteria and viruses. Allylic sulfides protect the immune system, lower risk for some cancers, lower cholesterol. They act as a natural antibiotic against viruses, bacteria and parasites. Researchers at John Hopkins University reported that phytochemicals found in garlic and onion kills pylori, the bacterium responsible for most gastric and stomach ulcers and stomach cancers. When cooking with good oils, like olive oil, heat changes it’s structure into trans-fatty acids or bad fats. Adding garlic or onions to the oil will keep this degradation from occurring for up to 20 minutes.

In closing, I encourage all who have an ear to listen to enlarge your belief and purpose for what you eat at your next meal. Look beyond it will keep you a certain size or satisfy some physical or behavioral hunger, but that your next meal can start to heal you, or better yet prevent a disease from forming. The best offense against disease is a good defense. It’s much easier to prepare than to repair. Stop thinking that the squeaky hinge gets the oil and take action before you squeak. Healing is a process and it can start with the healing power of your next meal.
The Author: