The Lesson My Father and The Old Bike Taught Me 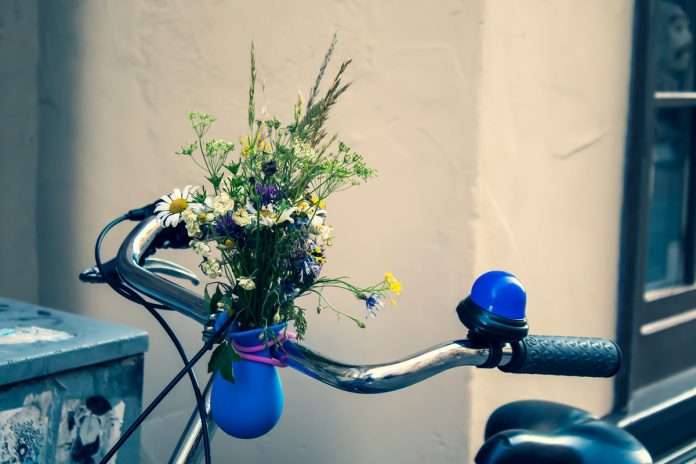 When I was about 8, we lived in Fullerton, California, about an hour from Los Angeles, in a middle-class nice neighborhood on a suburban cul-de-sac. There were many families with children that lived near, and we all played together.

Being a middle child, you never got anything new. That was just understood. You rejoiced when your older sibling got something neat, because if you were patient enough, it would soon be passed down to you.

Some things couldn’t wait, though and I desperately needed a bike. Of course, they were way too expensive new and the problem was my older siblings had long ago given away their bikes for boyfriends and new cars.

So my father and I went to the police auction that was held once a year to sell unclaimed property. I was jumping up and down with excitement and I imagined a beautiful sleek girls bike with sparkle paint and streamers, and thin tires. It would be the perfect size just for me, and for the first time, it was all mine first.

When we got to the auction, there was only one bike left. It was HUGE. It was a boy’s bike and had oversized tires, whitewalls, no less. It was rusted and sad. But it was a bike and my Dad saw the potential in it. It was marked twenty dollars and my heart sank- no way could we afford that. The Policeman running the auction took one look at my face and said softly to my father,”Could you do $10?” And I went home with the monster bike.

It became a wonderful project for Dad and I, just-us time. We took the bike completely apart, sandpapered off the rust and painted it sparkly blue. Once back together, we replaced the grips with ones with rainbow streamers, and my brothers clothes pinned a playing card on the back wheel so it made an awesome sound when you were sailing along, almost like a real engine.

The monster was transformed and every time I looked at it, I had to pinch myself that it was all mine. That old bike had a new life and it seemed to glow. Now I had to learn to ride that thing.

It was way too big for me, and I was a small little girl to begin with, but a determined one. I had to be careful because it had the bar on top but if I tilted the bike before I got on it and stood up on the pedals, I was golden.

The first time I took out the bike on the street by myself, one of the neighbor kids, Stephen, was watching me. Everyone was oohing and aahing over the bike. He was a big, robust kid who was head and shoulders taller than any of us… he looked like he belonged in high school, even though he was only 12. He and his strict German immigrant parents lived across the street, but he used to play with us. Unfortunately, he used his size to bully everyone. He marched up to me and grabbed the handlebars. “I want to ride it.” he scowled in my face. I gulped but held my ground. This was MY bike. I said, “No, I’m riding it now”. He glared at me and then reached over and shoved me off into the street and took the bike. I jumped up and before he could take off with the bike, I punched him. Solidly. In the nose and gave him a bloody nose. He ran screaming for home. Everyone else scattered and I limped home with my bike, which had a few war wounds from the skirmish. I was so sad, and told my Mother what happened. When Dad came home, he looked at the bike, but he never said anything, and I felt like I had ruined all the hard work we had put into it.

We sat down to dinner and there came a knock on the door. My Father got up to answer it and it was Stephen’s parents and Stephen from across the street. In a thick German accent, his father angrily demanded that my Father punish me. Dad took a look towards Stephen and noticed he had a black eye. He called me to the door and asked me if I had done that. I nodded miserably. Smugly, Stephen’s parents nodded their heads. My Father quietly said, “Your Stephen is quite a big boy to be shoving little girls off their bikes.” Stephen’s Dad’s face colored and he cleared his throat uncomfortably. “Well, yes, and we have punished him. We are here to see that you punish your child as well.” My Father, a lifetime Army Soldier, straightened up and looked him right in the eye and said, “What I do with my child is my business.” and he shut the door.

He turned, looked at me, winked and said softly, so my Mother wouldn’t hear, “And if he does it again, hit him again. I’m proud of you for defending yourself.”

In that moment I realized my Dad was behind me, no matter what. He and my Mother never believed in corporal punishment and we were never spanked. And although I was the middle child, my parents loved me, fiercely, protectively and without question. And that it wasn’t that I hit someone, but that I defended myself in great odds and took ownership of that.

That old bike and I had many adventures. He was my trusty steed and carried me to places in my imagination. He was finally retired when we moved into a smaller place and there was no room in the garage to store him. We gave him to another family with lots of middle children, where he could carry them to their next adventure. I never forgot that bike and all it taught me and what a valuable lesson it was.

POSTSCRIPT: I never saw Stephen again as their family moved soon after when his father was transferred. I heard later in life he became a Police Officer, which is funny, as I did, too.