The Organic Way to Get Rid of Japanese Beetles 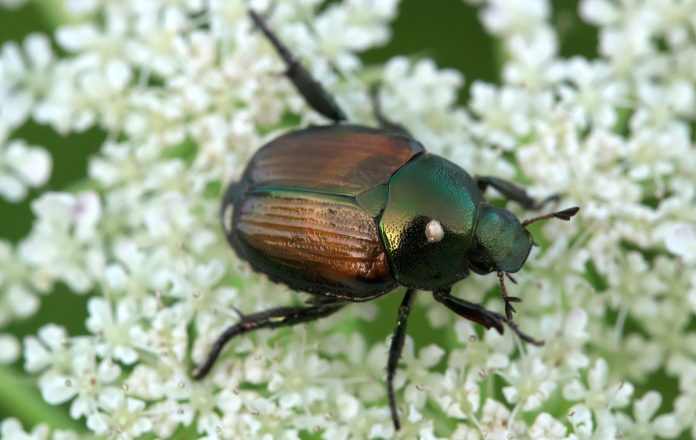 Japanese Beetles can wreak havoc on a garden. They can and will eat away at roses, fruits and other vegetation if the problem is not taken care of quickly. For those who want to refrain from using harsh chemicals to combat the infestation, there are a few organic ways to get rid of Japanese Beetles.

A Bucket of Soapy Water

The easiest and most straight forward way to get rid of Japanese Beetles is to fill a bucket up with warm soapy water and start hand picking them from your garden. The soapy water kills the beetles, so there is no need to invest in any sprays or powders.

This method is great for those who only have a few Japanese Beetles. For bigger infestations, however, you may need to try something a little more potent. Unless, of course, you don’t mind spending the day in your garden plucking beetles off of your plants.

While there are many ways to get rid of adult Japanese Beetles, your efforts may be in vein if you don’t take care of the root problem – the grubs. Milky Spore is a bacterium that causes disease in the grubs of Japanese Beetles. Typically, the powder-like substance is applied to the soil in August just as the grubs are getting close to the surface.

They will feed on the milky spores and the bacteria will reproduce inside of the grub. Within a month, the grub dies. As its body decomposes, billions of spores are released back into the soil. This keeps the underlying problem under control and one application lasts for three to four years. Make sure to follow the guidelines provided on the product that you purchase.

Neem oil can also be used to deter and possibly kill Japanese Beetles. The oil is obtained from the seeds of the neem tree and is a rather potent insecticide. It throws off their hormonal balance and also deters them from feeding, mating and laying eggs.

There are neem oil insecticide solutions available at your local garden supply store, or you may choose to make your own. The oil needs to be diluted in water before applying. Make sure to read the product’s instructions on how often to spray. In most cases, neem oil only needs to be sprayed once per week for three weeks.

Geraniums have quite an effect on the Japanese Beetle. Just thirty minutes after snacking on a geranium plant, the beetle will become paralyzed for up to 24 hours. This makes them extremely vulnerable to predators and also makes them very easy to hand pick. Many people report having much fewer Japanese Beetles after planting geraniums in their garden.

Another effective way to combat the infestation of Japanese Beetles, and other insects as well, is to place birdbaths and bird feeders throughout your garden. English sparrows, robins and cardinals are just a few of the birds that like to snack on Japanese Beetles.

Ducks love to eat Japanese Beetles. If you live in an area that permits you to have ducks, you may want to consider this method. They will keep your garden clear of those pesky beetles and other pests as well.

Want to learn a couple more easy tips to combat those pesky beetles? Go to http://myorganicgardeninfo.com