The Types of Trout Native to North America 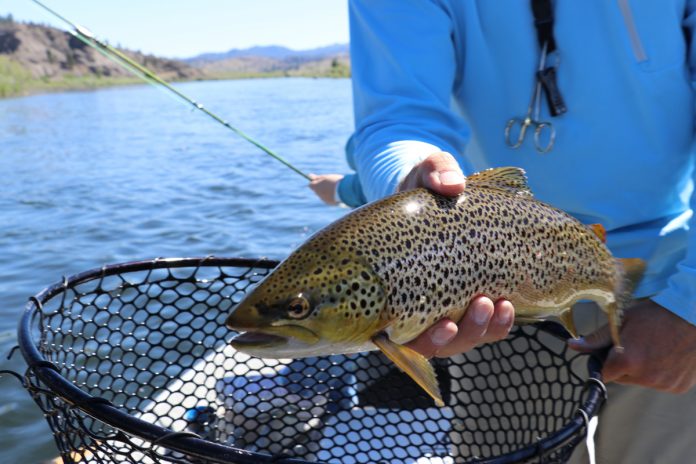 There are six major species of trout native to North America. All of these species offer a distinct challenge, and they are all of interest to the angler. But perhaps more importantly, these Native species belong in America. They are a natural and valuable part of our natural environment. Some folks are likely to shake their heads at one notable omission in this article:the brown trout. While brown trout are widely established throughout America, they are not native to our continent. Brown trout are originally a European species, transported to America many years ago.

Rainbow trout are probably the most common species of trout in North America. They are native to the Pacific coast states, western Canada, and Alaska. With that said, rainbows are found in streams across the nation, from British Columbia to Georgia. They are the most common hatchery fish, because they easily reproduce in captivity. Still, there are many truly wild and native populations, and those places often have the most interesting rainbow trout fishing. The best rainbow trout fishing in North America is probably found on Alaska’s Kenai River. The Rainbow trout there grow to the five to fifteen pound range on the eggs and carcasses of the salmon that run in the stream. A close second would be the Klamath River in Oregon, with excellent runs of large sea-run rainbows, called Steelhead.

Cutthroat trout are native to the western United States and Canada. They are sometimes referred to as the Rocky Mountain Trout, because that is where most of the cutthroat populations exist. There are also sea-run cutthroat in the Pacific Northwest and Alaska, but Cutthroat will always be associated with high mountain streams. The best cutthroat populations are often found in sections of stream that are too fast and too cold for other trout species, because they do not compete well with rainbow, brown, and brook trout. Cutthroat trout are renowned for their propensity to freely rise to dry flies, which makes them an excellent sport fish. Their are many varieties of cutthroat trout, but the most common are the Yellowstone Cutthroat, the Snake River Cutthroat, and the Coastal Cutthroat. The Yellowstone River in Yellowstone National Park and the South Fork of the Snake in Idaho are two excellent cutthroat streams.

Brook trout are native to the eastern United States, Eastern Canada, and the upper Midwest. Brook trout have also been established in the Rocky Mountains, and are the predominant species in many (if not most) small western trout streams. They have gained ground in their non-native territory (the Rocky Mountain west), and lost ground in the east, where they are native. The situation has progressed to the point that there are probably more brook trout fisheries in the Rocky Mountain West than the east. Still, the brook trout is a fine sport fish wherever it is found, and it will gladly rise to a dry fly or a small spinner. They generally do not grow large, and are usually not difficult to catch. Some fine brook trout streams include the Manistee in Michigan, the Nipigon in Labrador, the St. Regis in Maine, and the upper Yaak in Montana.

Not many people have heard of the Bull trout. Originally found throughout the Rocky Mountain and Pacific Northwest, the Bull Trout is now relatively rare. The best populations are now found in Montana, British Columbia, and Alberta. There are several places where you can fish for Bull trout on a catch and release basis in Montana, but British Columbia offers by far the best fishing. Bull trout are a fragile species, and even where regulations don’t demand it, we would ask you to release any Bull Trout you may catch. The Elk River in British Columbia is an excellent Bull trout stream.

Lake trout are a deep water fish, present in Glacial lakes and reservoirs throughout the northern portion of the continent. They are often in water deeper than 20 feet except during the spawning season in the fall (September to December) where they go to shallow areas in the lake either a sandbar or graveled area. They are best caught with spoons and jig lures fished in deep water. Excellent Lake trout lakes include Lake Superior and Flathead Lake in Montana.

Golden Trout are native to the Sierra Nevada Mountains in Nevada and California. They are a rare, beautiful high mountain fish. They live mostly in high altitude lakes and streams. They have also been transplanted with favorable results to high mountain lakes in Montana, Wyoming, and Colorado. Golden Trout are another rare species that should usually be released unharmed. They are simply too beautiful to be caught just once.

All of these trout species are native to North America, and they are an important inhabitant in our streams. While some of these species may have more sporting value than others, it is important that we respect and work to protect all of them.

Davidson Manning is an accomplished amateur freshwater fisherman, both fly-fishing and traditional methods. He has fished waters all over the United States from Alaska to Florida, and from New York to the Southwest. Davidson particularly enjoys trout fishing but spends many days on the water pursuing warm water species as well. The highlights of his fishing endeavors occur on small streams in solitude and away from crowds.