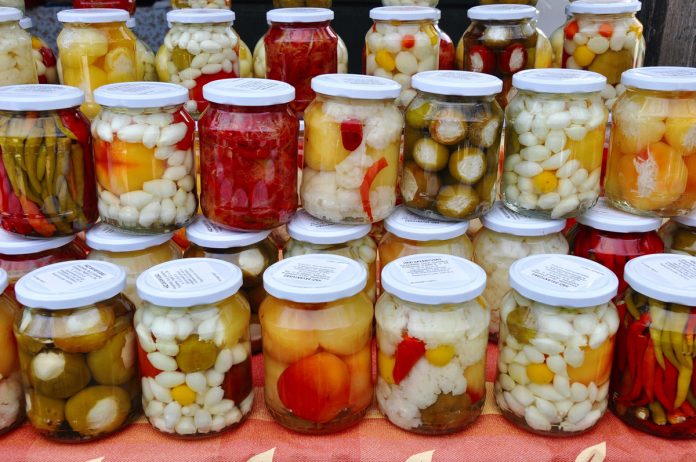 I knew they were the world’s best pickles the moment I tasted one. That first taste took place around 1950, and I’ve tasted a lot of pickles since, am a pickle hound in fact, but I’ve never come across anything else as good.

They came to us by way of my Uncle Ronald Smith, who was an electrician in the Bitteroot Valley of Montana where I grew up. One day he was doing electrical work for a Bulgarian family, and they rewarded him with a sample pickle. He liked it so much he got the recipe and gave it to his wife Gladys, who gave it to Grandma Glidewell, who made it and gave some to me, and I thought I’d died and gone to pickle heaven.

And thus, although they became an old Glidewell family recipe, they are really an old Bulgarian family recipe. The Bulgarian family, whose name I do not know, told Uncle Ronald that in Bulgaria, when the first heavy frost kills the tomato vines, they put all their end-of-garden vegetables –- including those green tomatoes — into a barrel, fill the barrel with pickling brine, and eat the best pickles in the world all winter.

It turns out, though, that the pickles’ travel from Bulgaria to the U.S. was only one leg of a more ancient journey. Because I mentioned them to an Iranian woman, and she said, “My family has always made pickles like that! Exactly like that, except we add tarragon.”

Iran being the new name for the ancient kingdom of Persia, who knows how many centuries these pickles go back?

There’s more: I later lost the recipe’s brine proportions. Gave some thought to its travels between Persia and Bulgaria, looked in an Armenian-American cookbook (Treasured Armenian Recipes, published in 1949 by the Armenian General Benevolent Union) and there they were, under “Mixed Pickles No. 2.” Turns out the world’s best Armenian pickles are just like the world’s best Bulgarian and Persian and American pickles, except they include dill, and sometimes green beans and coriander seed.

So this is an old, old recipe belonging to the whole human family.

You can also add unpeeled and untaxed small cucumbers, zucchini, or lightly cooked green beans, though we never did. The hot peppers add adventure and zest, but if you prefer to save your tears for really sad occasions, why not?

Amounts and proportions depend on what vegetables you have and how many quarts you plan to make. You don’t have to have the green tomatoes, and the other things can be bought in a grocery store. But you do need a variety of vegetables, and you have to have the onions and garlic, or you won’t have the world’s best pickles. You will have the world’s so-so pickles, and that would be a shame.

To one quart of water add 1/4 cup pickling salt (salt that isn’t iodized), and one cup of white distilled vinegar. Bring the mixture to a boil. This is enough brine to cover two quarts of mixed pickles, with a little left over.

Follow the canning instructions in a good, standard cookbook. Or, if you plan to eat them right away, pack the vegetables into clean quart jars, pour over them the hot brine, and keep the pickles covered in the refrigerator. Some of the more impressionable vegetables, like zucchini, will be ready to eat in only two or three days.