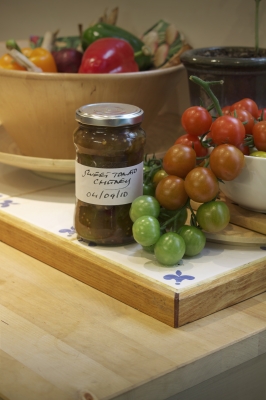 I’m not by any means a gardener, but I do love my grandchildren and when they clamoured to buy some seeds, I let them pick one packet each. Chloe the eldest picked a packet of mixed flowers, and I reckoned I could cope with them. But the youngest Bethany was going through one of those phases that children go through. She had taken to eating tomatoes, as if they were apples, she couldn’t get enough of them.

Yes, that’s Right. You’ve guessed it. She picked a packet of tomato seeds. Glory be, what was I to do now, as far as I was aware you needed a greenhouse in these northern climes, to grow tomatoes. I tried to talk her out of it, but she was having none of it.

‘You said I could pick my own seeds, Grandad,’ she cried.

‘Yes, but I don’t think you can grow them without a greenhouse.’ I said.

‘I don’t mean just today, I mean in general.’

‘That’s alright then, we’ll plant them today while it’s warm.’

I gave in then, thinking, we’ll plant the seeds today and she’ll eventually forget all about them.

I paid for the seeds, a pack of plant pots, a bag of compost, and lugged them home on the bus. After getting off the bus the girls ran ahead, leaving me to hump the compost and plant pots. Reaching the house and since my hands were full, I pushed the door open with my foot and was just in time to hear the little one say, ‘And, Grandma, Grandad’s coming with the pots and the compy stuff and we’re going to plant the seeds straight away.’

‘Hold it, hold it,’ I said as I staggered through the door, ‘before Grandad does anything, he’s going to have a nice cup of tea.’

But she waited, after a fashion, humming a hawing, until I had a cup of tea, and then she dragged me out into the garden.

Opening the bag of compost I filled six pots for Chloe and let her plant her own flower seeds, then help Bethany with her tomato seeds. Now all we could do was wait.
The weather was mild so it should have been, since it was May and we were far too late for planting tomato seeds. Two weeks went by and the flowers started to show, but there was no sign of the tomatoes. Another two week went by and just when I’d given up. Bethany came racing indoors, all excited.

‘Come and look Grandad, they are growing.’

And sure enough the tomatoes were showing, but I didn’t hold out much hope for the crop. Anyway as soon as the plants were big enough I transplanted them into a couple of grow bags and they took off, like Jack’s magic beanstalk.
.
It’s now the 30th of September, the plants are 5ft high, filled with tomatoes, and are still flowering. Bethany is over the moon and is looking forward to picking her first fruit, or should I say vegetable? But as we slide into October, no way on earth are they going to ripen and to save her disappointment I decided after consultation with the Grand Dame, my mother in-law, to turn them into chutney. See the recipe below. By the way, Chloe’s flowers bloomed, though they are nearly finished now.

Cut up tomatoes, peel, core, and cut up apples, cut up onions and chop raisins.

Place all ingredients into pan, bring to boil and simmer until vinegar has been absorbed. (Approx 2 hours) At this point you should be able to draw a wooden spoon across the mixture and it will leave an impression.

Remove the bag of ginger, pour chutney into hot dry screw-top jars and place waxed discs on top of each one.

Cover jars with a clean cloth until cold.

Screw on lids (Make sure they are vinegar proof first) label and store in a cool cupboard.

Mmm, I can taste it now.

Fred Watson published his first book, a fantasy adventure novel aimed at the 8-12 age group, in November 2006. A grandfather of four, he loves to write for all age groups, has an abiding interest in history and continues on a regular basis to add new stories etc to his website.