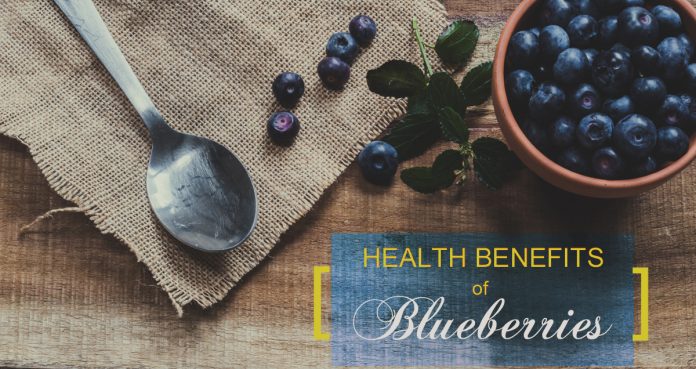 The health benefits of blueberries or foods containing real blueberries or pure blueberry juice are numerous. Research continually proves that this fruit contains powerful antioxidants that ward off a variety of diseases. In addition, the fruit is packed with other vitamins and minerals necessary for a healthy body.

The blueberry originally grew native to North America and was not introduced to the European continent until the 1930s. Nowadays, the plant is also grown in Australia, New Zealand and certain parts of South America. It is a perennial and typically blooms during the middle of the summer. The plant has two main varieties of bushes. The wild variety grows quite low to the ground and is called the low bush blueberry; the taller variety is a cultivated plant called the high bush blueberry.

The fruit of the blueberry bush is spherical in shape and is approximately a half of an inch in diameter. When it is ripe, the berry is a deep blue or blue-violet color. The taste varies based on the ripeness of the fruit; the flavor becomes less acidic and much sweeter the longer that the berry is on the bush.

Raw blueberries are a wonderful choice for a snack. A typical portion size is about two and a half ounces, which translates into approximately fifty average sized berries. A portion contains around forty calories; almost none of these calories are from fat. Of course, there is no cholesterol and only a minute amount of sodium. The fruit is composed mainly of carbohydrates with approximately seven grams of sugar and two grams of dietary fiber in one serving.

Although blueberries contain small portions of a variety of vitamins and minerals, they are mostly known for supplying vitamins C and K and the mineral known as manganese. In fact, according to the United States Department of Agriculture’s guidelines, this fruit provides a fifth of the recommended daily amount of manganese and a fourth of the daily amount of vitamin K. In addition, blueberries have a small amount of the B vitamins which provide energy to the body.

Perhaps the best way to gain the most nutritional value from this fruit is to eat it raw. Some choose to sprinkle them on their morning cereal or oatmeal while some add them to fruit or green leafy salads. Another excellent option is flash-frozen blueberries; this method preserves almost all of the nutrients. Blueberries can be found seasonally in most grocery stores’ produce sections as well as sporadically during the winter months when they are imported from warmer climates. Another great option, especially for those who do not like to eat fresh fruits and vegetables, is blueberry juice which can often be found in markets’ organic sections. It is often found in conjunction with pomegranate juice, which is another powerful antioxidant and is a great way to enjoy blueberry health benefits. Additionally, blueberries are delicious when added to baked products such as muffins, breads, cakes and pancakes.

Very few people suffer from allergies to blueberries. Those who are affected generally have mild to moderate symptoms. An allergy to any kind of berry can begin at any point in one’s life and may not happen when he is a child. The most common reactions occur when the body rejects the food because it is unable to digest it. The symptoms that occur from this include nausea and vomiting, diarrhea or a moderate to severe stomach ache. Some people may develop a rash. Antihistamines such as Benadryl can be given for a skin reaction. Very few people develop an allergy so severe that they need to be taken to the emergency room. However, a few people are so allergic to the fruit that they have an anaphylactic reaction and develop shortness of breath, a swollen tongue or other violent reactions. Babies under nine months of age should not be fed blueberries since their bodies have not yet begun production of the enzyme needed to digest this fruit.

Several research studies have shown that blueberries hold even more health benefits than was originally thought. It should also be noted that the wild blueberry varieties contain even more of some nutrients than do the cultivated varieties.

Reports released in 2007 showed that the many antioxidants in the skins and flesh of blueberries fight off the effects of Alzheimer ‘s disease and slow its degenerative process. In fact, some studies have even shown that consuming this berry can lessen the negative effects from a stroke or other ischemic event.

The Journal of Agricultural and Food Chemistry published a report that showed that individuals who consumed blueberry juice had better memory and fewer problems with depression.

Multiple studies have also shown its benefits on the heart and cardiovascular health. The high amount of anthocyanins in blueberries, which gives the fruit its deep blue color, relaxes and widens the blood vessels causing decreased blood pressure. It may also decrease bad LDL cholesterol levels.

Finally, a research study by the University of Michigan Cardiovascular Center showed that blueberries decrease abdominal fat and in turn decreases the incidence of metabolic syndrome.

In addition, blueberries have numerous health benefits that have been known by scientists for several years or decades. Blueberries have more antioxidant properties than any other fruit. Antioxidants have been shown to decrease the movement of free radicals throughout the body, which in turn decreases one’s risk for cancer and decreases the effects of aging throughout the body’s organs especially the skin. It is also well-known that blueberries, similar to cranberries, promote the health of the urinary tract by cleansing the tract of unhealthy bacteria and thereby preventing urinary tract infections. This fruit’s high levels of anthocyanins aid in vision by decreasing the incidence of vision loss from such disease processes as macular degeneration and cataracts. Finally, the dietary fibre from the skin of the fruit decreases the incidence of constipation while the vitamins and minerals such as copper improve digestion.

Blueberries are truly natural powerhouses that are filled with nutrients to ward off a number of diseases and aid in good health. Scientific research studies continue to dig deeper into this fruit’s many wonderful attributes. With so many delicious ways to eat this fruit, no one will be able to resist its juicy, sweet flavor and gain from the health benefits of blueberries whether eaten whole or as blueberry juice.