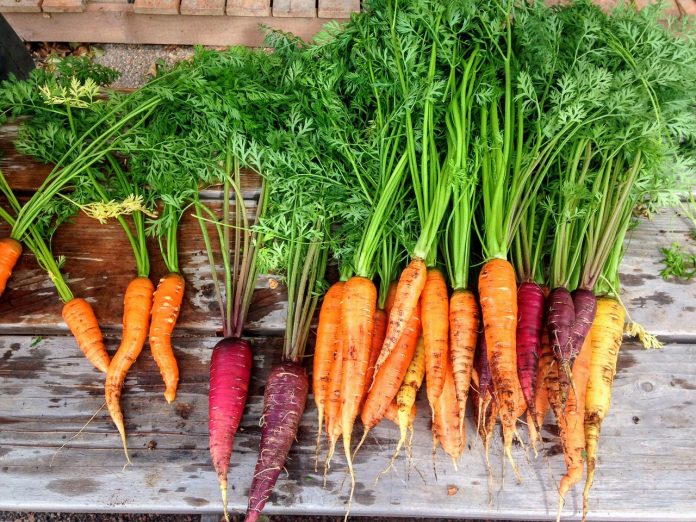 The health benefits of carrots can be traced back to when it was originally cultivated in the Middle Eastern, central Asian countries and parts of Europe thousands of years ago. These original carrots did not resemble the carrots we see today. There were purple, red and yellow colored carrots. During the 15th and 16th centuries in Europe, carrots were widely cultivated and were initially brought to North America around this time.

In the commercial marketplace today, China produces approximately one-third of all the carrots that are bought and sold all over the world. Russia is second and the United States is a close third. Currently American adults consume approximately 12 pounds of carrots yearly.

The name “carrot” is derived from the word “karoton”, which is Greek. The first three letters -kar designate a horn-like shape, referring to the part of the carrot that is underground and generally eaten.

The Nutrient Value of The Raw Carrot

The Food Chart that details the percentage of daily value of a single serving of carrots shows that each serving provides an excellent, very good or good %DV of the necessary nutrients and confirms the health benefits of carrots. Because of this, carrots are considered one of the world’s healthiest foods. Carrots contain over 80 nutrients. One cup (122.00 grams) of raw carrots has 52.46 calories.

The carrot a root vegetable that is renowned for its rich supply of beta-carotene. Beta-carotene is an antioxidant nutrient that gained its name from the carrot because of the large quantities the carrot contains.

A carrot contains many other nutrients as well. The carrot offers a multitude of other nutrients that benefit the cardiovascular system, have anti-cancer properties and assist the immune system.

Antioxidant Benefits in The Carrot

The amount of phytonutrient antioxidants varies depending on the variety of carrot. For example, the purple and red carrots are well-known for their abundance of the antioxidant anthocyanin. The orange carrots are loaded with beta-carotene, accounting for 65% of their entire carotenoid content. Half of the yellow carrots carotenoids are from lutein. It does not matter which variety is chosen, each contains excellent antioxidant benefits.

The Cardiovascular Benefits of The Carrot

It is not a surprise that numerous studies have shown that the health benefits of carrots extend to cardiovascular benefits. Much of this is due to their rich antioxidant content. The cardiovascular system is in need of constant protection from free radical damage. This is especially true for the arteries because they are responsible for transporting highly oxygenated blood throughout the body.

In a study that was recently done in the Netherlands, participants were monitored over a period of ten years. This study has provided us with some riveting new information concerning carrots and the role they play in preventing cardiovascular disease (CVD).

During this study the participants’ fruit and vegetable intake was categorized according to color. The focus of this study was on four colors: orange/yellow, green, white and red/purple.

In the dark orange/yellow group of foods, carrots were found to be the one main risk-reducing food concerning CVD. The participants who did not eat very many carrots had the smallest amount of risk reduction for CVD. Even so, they still received some reduced risk of CVD from their carrot intake.

Participants, who consumed 25 more grams, which is almost one-quarter cup of carrots, had a significant decrease in their risk of CVD. The participants who consumed 50 to 75 grams more demonstrated an even higher reduction in their risk of CVD. This study surely demonstrates how easily the risk of CVD can be reduced. The best-researched polyacetylenes found in the carrot are falcarindiol and falcarinol. Preliminary research has shown that the polyacetylenes that are found in the carrot have anti-aggregatory properties and anti-inflammatory properties. The anti-aggregatory properties assist in preventing the red blood cells from excessively clumping together.

The Carrot and Vision Health

Growing up our parents always told us to eat our carrots because they were good for our eyes. However, there are not many studies documenting the benefit of carrot consumption on human eye health. The majority of studies have focused on the carotenoid levels in the bloodstream and the carotenoids activity themselves, not the foods, like carrots, that contain them. Even so, there have been smaller scale studies done on humans that show benefits to the health of the eye with the consumption of carrots.

For example, one study showed that women who consumed carrots no less than twice weekly have a lower rate of glaucoma (optic nerve damage generally associated with excessive eye pressure) than women who only consumed carrots on occasion.

Geranyl acetate is one of the photonutrients present in the carrot seed and has been shown to reduce the risk of cataracts in animal studies.

The Anti-Cancer Benefits of Carrots

The majority of the research on the cancer fighting benefits of the carrot was in the area of colon cancer. Some participants in the studies actually drank carrot juice. Other research studied the various human cancer cells in the lab.

Much more research is necessary; however, the results of the studies that have been done to date have been very encouraging. Lab studies indicate that carrot extracts have the ability to inhibit the growth of the cancer cells of the colon. The polyacetylenes that are found in the carrot, especially falcarinol, have been particularly linked to inhibiting the growth of these cells.

Shredded carrots are a nice addition to a salad as well as being one of the purest ways to enjoy the health benefits of carrots.

Eat carrots as a salad by shredding them and then adding them to chopped beets and apples for a healthy snack.

The best way to cook carrots is to steam them.

Peel and trim the ends of the parsnips and carrots. Cut them in half (lengthwise).

In a five to six quart pan, melt butter on medium/high heat. Add the carrot halves and a 3/4 cup water; cover and cook three minutes.

Add the parsnips, cover and continue to cook about eight to ten minutes longer (until tender when pierced with fork).

Uncover and shake the pan frequently until the liquid evaporates. Pour the vegetables into a bowl and salt them to taste.

Avoid serving small children coin-shaped slices of carrots. There is a chance they could choke on them. The best thing to do is cut the carrots into julienne strips.

As well as the numerous health benefits of carrots outlined above, the carrot can add a variety of colors and textures to many vegetable dishes and can be enjoyed raw as a tasty snack, cooked or as carrot juice for a nutritious drink.