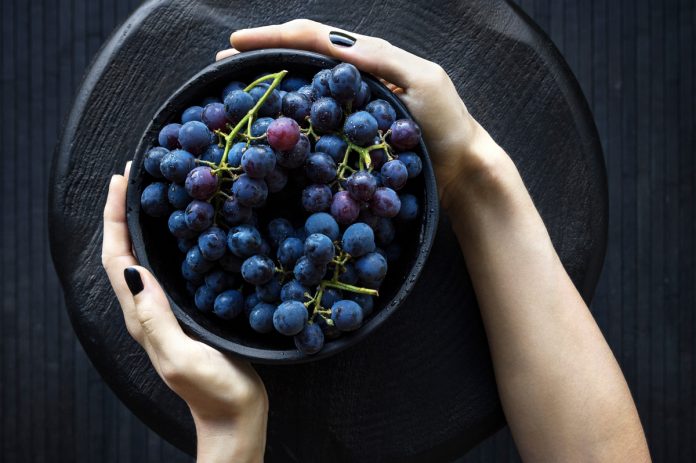 Grapes are a small and sweet berry that are cultivated all over the world and both the taste and health benefits of grapes are popular with people of all ages. While they are commonly eaten raw, they may also be cooked or mashed to produce a range of food products, including jams, jellies, wines, raisins, vinegar, oil, vinegar, and molasses. They were first cultivated at least 6,000 years ago in Europe, where they grew wild before people learned to grow them. Thanks to the efforts of ancient monks, who wanted grapes to make holy wine, they reached what is now the United States and are among the most favored fruits in the country today.

There are more than 50 different strains of grapes that are used for eating raw as table grapes and close to 60 varieties of grapes that are cultivated primarily for the production of wine. Each kind of grape is slightly different in terms of the kinds of nutrients it can contain, yet what the research increasingly indicates is that every kind of grape may promote greater health and longer living among people who consume them regularly.

Grapes themselves are made up of between 70 and 80 percent water and between 20 and 30 percent sugars, such as glucose and fructose. However, there are a number of additional nutrients in most grapes, including gallic acid, glucosides, phosphoric acid, manganese, iron, a number of vitamins, calcium, and folic acid. The nutrients and enzymes contained within grapes indicate that they are a rich source for a variety of healthy elements needed by the body.

It is no surprise, as a result, that grapes are regularly eaten all over the world by people who are seeking to improve their health and lifestyles without spending a great deal of money on expensive prescription drugs. This article will describe the three primary health benefits of grapes, which are in the areas of heart disease, cancer, and aging.

The first and perhaps most significant benefit of grapes lies in the area of heart disease. There are a number of present and ongoing studies that have focused on the potential benefits of grapes when it comes to slowing down or preventing heart diseases. This is significant since heart disease is the number one killer of Americans today, beyond other factors such as car accidents, smoking, and even cancer. It was close to 20 years ago when doctors and scientists discovered that certain people in France were less likely to suffer from heart diseases than were the majority of people in other parts of the globe. They called this discovery the French Paradox, and their means of explaining it lay in the fact that in France, it was rather common to have a glass of red wine with one’s meals.

Since this news became disseminated around the world, at least 300 more studies were carried out in different parts of the globe that suggested that consuming grapes or red wine would reduce the risks a person faced of developing heart disease over time. The effects of grape juice and wine seem to be that they keep fatty food products from clogging the arteries of the heart as easily as they would without the presence of grapes. Coronary heart disease is a life threatening condition that occurs when fatty deposits known as plaque build up over time on the artery walls inside the bodies. If left unchecked, this can lead to the vessels that bring blood to the heart or brain to become blocked, which can lead to heart attacks in the heart and strokes in the brain.

However, the presence of antioxidants, which are in fresh grapes and are also known as polyphenols, are very helpful in keeping oxidized cholesterol from accumulating in arteries and blocking them. A particular polyphenol called resveratrol is present in grapes, and it is this polyphenol that keeps arterial walls from suffering cholesterol related damage. Grapes also contain a nutrient called pterostilbene, which can reduce the levels of triglycerides and cholesterol in the body by increasing the ability of other enzymes to reduce the levels of fat in the bloodstream.

There are also compounds known as saponins, which are found in the skin of grapes, that bind to cholesterol, which prevent it from being absorbed into the body as a result. Finally, the consumption of grapes leads to the absorption of alpha tocopherol, yet another antioxidant. This antioxidant increases the activity of antioxidants in the blood by up to 50 percent compared to previous levels. As a result, red grapes appear to be the healthiest grapes that a person can eat if he or she is interested in preventing or reducing the risks of heart disease.

Chill Out This Summer

However, heart disease prevention is not the only benefit offered by grapes. There is also the spectre of cancer that claims thousands of Americans each year. Fortunately, grapes are known to have high amounts of caffeic acid, which is a substance that has been shown to fight cancer at the cellular level. Another set of nutrients found in grapes known as bioflavonoids help vitamin C be absorbed into the body more efficiently. Biovflavonoids also make it easier for vitamin C to connect healthy tissues within the body. However, by keeping vitamin C from oxidizing into more dangerous molecular compounds and rupturing capillaries, they also work as antioxidants.

Bioflavonoids are also implicated in the strengthening of cells that are fighting cancer and they have even been shown to help kill cells that have already become cancerous. reservatrol, which was mentioned earlier, is also useful in the prevention of cancer, particularly cancers of the prostate, lung, breast, and liver. As with heart diseases, red grapes have been shown to have the most impact in cancer prevention.

Finally, grapes have also been shown to have benefits in reducing the effects of aging. This is again due to the natural antioxidant resveratrol, which was mentioned earlier as having positive effects in the fight against heart disease and cancer. The antioxidant appears to have positive effects on genes that impact the process of aging. This is done through the restriction of caloric intake, which has been linked to living longer in both laboratory animals and people. When enzymes that slow the aging process are activated, DNA becomes more stable and the lifespan may potentially increase by several years in humans allowing you to enjoy the health benefits of grapes for longer.