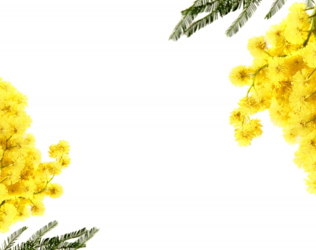 Despite its sunny reputation, in winter, France’s Côte d’Azur can be gray and cold. So when the mimosa trees bloom, between late January and March, their sun-bright flowers lift everyone’s spirits to the point where entire towns stop to celebrate the coming of spring.

Along with their brilliant yellow color, mimosa blossoms are memorable for looking like little down powder puffs. At some point, a French chef found that the mashed yolk of a hard-cooked egg is similarly bright and fluffy. The result is a variety of dishes, from deviled eggs to a salad, all called “mimosa.”

In classic, traditional French cuisine, Salade Mimosa is a combination of boiled potatoes, green beans and artichoke hearts dressed with a sharp vinaigrette. A hard-cooked egg is sieved over it. Pushing the egg, both yolk and white, through a coarse sieve makes them particularly fluffy and emphasizes the yellow of the yolk.

When I want to welcome the official first day of spring on March 20th and fresh spring vegetables have not quite arrived at my market, I create my own Mimosa Salad using whatever is available to put the season’s sunny mood and colors on a plate.

I include leafy greens, starting with tender Boston lettuce and just the tips of watercress sprigs. I use a hard-cooked egg that is still warm. Its texture is more tender than a cold hard-boiled egg, which does not work as well when pushed through a sieve. By chopping the white and yolk separately, I am also able to arrange the yolk on top of the whites, making the most of its golden color.

If eating an egg yolk makes you hesitate because of its fat and cholesterol, consider that health experts advise that eating an occasional egg won’t affect your cholesterol or heart disease risk. And it does provide some benefits, including vitamin D and calcium. Egg yolks are also rich in lutein, a powerful antioxidant that helps prevent age-related macular degeneration, a leading cause of blindness. So welcome spring, and bon appetit!

In a small bowl, mix together vinegar, salt and oil. Add cucumber and toss to coat all sides. Cover and refrigerate while preparing the other vegetables.

Cook the egg until it is hard-boiled. Place under running cold water until egg has cooled down to warm. Set aside.

From the watercress, pluck about 2 dozen tender sprigs off the larger stems. Tear lettuce into bite-size pieces into a large mixing bowl. Add watercress and toss to mix.

Shell the egg and cut in half lengthwise. Place the yolk in a small bowl. In a separate bowl, chop the white into small dice. Using a small fork, break the yolk up until it is fluffy and powdery.