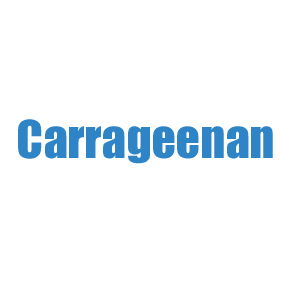 Carrageenan is a product derived from certain types of red algae, a seaweed found throughout the coasts of North America and Europe. The product is most often used as a thickening agent in place of animal-based products like gelatin, which is extracted from animal bones. It is a common ingredient in many foods and gel-like products, and even has applications in biochemistry. Carrageenan is nearly identical to agar, another substance derived from several different species of red algae.

There are three main classes of carrageenan — kappa, iota, and lambda — each of which have different gel strengths. The kappa class produces a solid, firm gel when mixed with water, and is known for reacting well with dairy proteins. The iota class produces a soft gel when mixed with water, and tends to gel more easily when combined with calcium. The lambda class does not gel in water, although it will in the right concentration in milk; it is more often used as one of thickeners than to cause a product to gel.

Traditionally, the species of algae used to produce carrageenan was Irish moss or Chondrus crispus. In modern times, the kappa class is mostly produced from the Eucheuma cottonii species, while iota comes from Eucheuma denticulatum and lambda from species in the Gigartina genus. Other types of red algae are also used, and yield various amounts of each class.

Carrageenan is produced in two forms: refined and semi-refined. To produce the refined form, the algae is cooked in an alkaline solution for several hours, then the solid parts of the seaweed are filtered out. The carrageenan is concentrated and removed from the solution, then dried. This method for extracting the substance has been used for hundreds of years, although it is slow and expensive.

To produce the semi-refined form, the algae is cooked in an alkaline solution that contains potassium hydroxide. The potassium prevents the carrageenan from dissolving in the solution, but allows most of the other parts of the algae — like proteins and carbohydrates — to dissolve. The algae is then removed from the solution, washed, and dried. What is left is carrageenan and cellulose, which is ground into a powder. Because it does not gel with potassium, the lambda class cannot be produced with this method.

It is possible to produce carrageenan at home by boiling Irish moss for about 20 to 30 minutes. When the mixture cools and the moss is removed, much of the carrageenan will have dissolved in the water, leaving a gelled substance.

In food additives and other products, carrageenan works as a thickener, stabilizer, and emulsifier, meaning that it helps keep mixed ingredients from separating. It gives foods a smooth texture and accentuates flavor. It is often used in dairy-based foods, like ice cream, yogurt, and cottage cheese, because it reacts well with milk proteins. Carrageenan is also found in jelly, pie filling, chocolate, salad dressing, and even as a fat substitute in processed meat. Because it comes from algae, it can be used as a substitute for gelatin for vegetarian and vegan products.

Other, non-food items, like toothpaste, personal lubricants, and air freshener gels may also include carrageenan. It serves the same function as it does in foods — to thicken and stabilize the product, and make it smoother. Some types of fire fighting foam also use carrageenan, which thickens the foam and helps it become sticky and more effective. In chemistry, gels made with it can be used to carry microbes or immobilize cells.