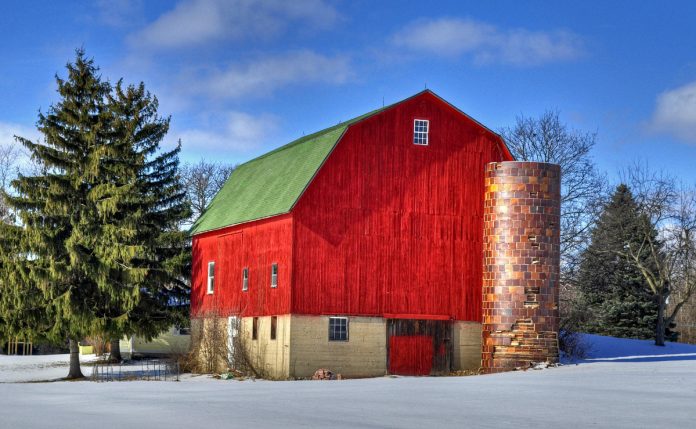 Why Are Barns Painted Red, and Why Do They Have Lightning Rods on Their Roofs?

Our image of a truly picturesque barn is that it ought to be red. As early as 1860 red “paint”—-a mixture of iron oxide, lime, and linseed oil was used to paint barns out east. Sometimes animal blood was mixed in also. Farmers migrating from the east brought the practice with them to the mid-west. The practice of putting iron scraps into a large barrel of buttermilk for a couple of weeks also would be used to make a primitive rusty red paint. That the paint was easy and inexpensive to make could explain why many barns were the color red.

It was thought that to paint a barn red would keep a dairy barn warmer in winter, absorbing the rays of the sun. red is also a friendly warm color indicating that the farm family took pride in how their barn looked and that they were neighborly to all who passed.

Lightning rods or iron spires, standing two to three feet high with glass balls attached are still on most of the barns today, however the barns are generally the older ones. They were supposed to deflect a bolt of lightning that would otherwise strike the barn and probably, burn it down. This was a real fear among every farmer. Early on, they were not accepted by God-fearing farmers because they felt it was God’s will for the lightning to strike. In time most farms were convinced of their practicality. Many lightning rods today still appear on the barns but do not have the colorful glass balls intact. Why? It was a favorite target for farm boys with B-B guns. While they are still a pleasing addition to an old barn, their real worth in preventing lightning striking the barn is widely questioned.