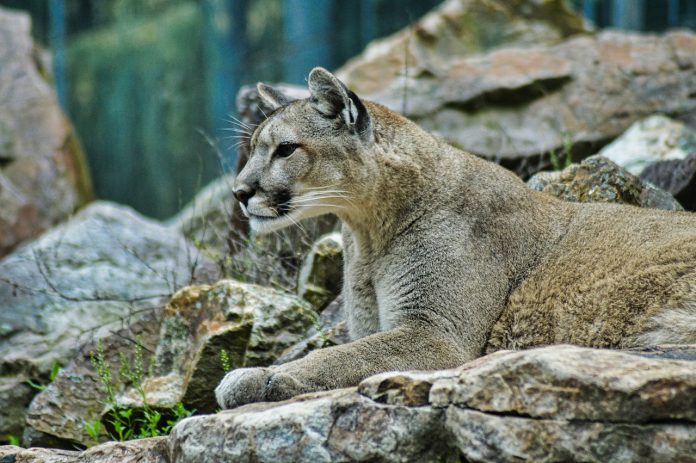 Bears, cougars and other large mammals are a fact of life on most rural properties in North America.

Recently, we found evidence of a cougar (mountain lion) attack on a deer not 200 feet from our back porch. And we’ve got a big, fat male black bear living not too far into the forest just behind our property. So, yes, the presence of big, potentially dangerous wildlife is always in the back of our minds.

But it wasn’t always that way.

I grew up in the country. As children, we played in the trails in the dense bush for hours on end. As teenagers, we wandered around in the pitch black of the rural night, doing the crazy things teenagers do. Never, ever did we even think about coming across a bear, a cougar, an elk or any of the other wild creatures that we see (or see signs of) so frequently these days. And we never actually ran into any.

Whether the populations have grown, or the animals’ movement patterns have changed, I don’t know. Probably a little of both. We rarely saw deer in our neighborhoods back in the 1970s and 1980s. Now they’re everywhere! And where there are deer, of course, there are predators. Now I’ll admit, it’s actually reassuring to know they’re out there in greater numbers now, like maybe we’ve turned a corner after almost extinguishing them in the last hundred plus years. But with a young child at home who loves to play outside, I don’t want them too close.

So how do you ensure that living on your rural property won’t put you in conflict with the local large wildlife?

What NOT to Do

You can reduce the chance you’ll have problems with wildlife on your rural property by ensuring you’re not guilty of any of the following:

You Keep Bowls of Pet Food Outside

Bears love pet food, and when a bear is on your porch munching dog chow, chances are the bear will end up dead. If the feeding continues, it will get more and more aggressive in its pursuit of its favourite, easy food supply, and you’ll likely have to call the authorities (conservation officer, police, etc.) to deal with it. Raccoons, rats and all sorts of other creatures are also attracted to pet food – and all of these will encourage predatory animals such as coyotes to begin frequenting your property. If you’ve got livestock, you definitely don’t want coyotes wandering around. What to do instead: If your pet leaves uneaten food in its bowl, empty the bowl promptly. Alternately, you can feed your pet in a secure area that isn’t accessible to bears. But emptying the bowl, and keeping the bag of food secure, is your safest bet.

You Have a Messy Compost Pile

Hungry bears love unkempt compost piles full of smelly, half-digested fruits and vegetables – it’s a yummy meal for our furry, big four-legged friends. What to do instead: Add a layer of ‘carbonous’ material (dried leaves, dried lawn clippings, straw, shredded newspaper, etc.) every time you add your kitchen scraps, and aerate the pile every few days using an aerator or a long, straight stick. If you do this, the material should decompose quickly enough that the smell won’t attract curious bears.

Fruit is Left on Your Trees Beyond Ripening

Fruit is like candy to a bear, and they’ll do most anything to get it in their bellies, including tearing apart your fruit trees – or anything standing in their way. What to do instead: Always pick fruit as it ripens, and keep it off the ground. If you end up with fallen fruit, the best option is to bury it immediately under at least 12″ of soil. The goal is to eliminate the smell from wafting on the breeze. Trust me, you don’t want to wake up one morning and find a black bear lounging in your apple tree. Chances are it will end up dead, as bears habituated to eating food around humans is unlikely to change their ways, and become a potential danger to pets, children, and adults alike. I’m actually amazed there aren’t more injuries, to be honest.

Someone in Your Family Purposely Feeds Wildlife

In most jurisdictions, feeding wildlife is against the law, as it creates a dependency on and habituation to continued feeding. The only exception to this is probably birds. Here’s an extreme example: In August of 2010, a dozen bears were discovered surrounding a grow-op in south-central British Columbia during a bust by police. Apparently the people who lived on the property had been feeding them so they’d hang out and guard the operation. I’m not sure what happened to the grow-op bears, but chances are it won’t turn out very well. What to do instead: Just don’t do it, regardless of how exciting it might be to see wildlife on your property. We love watching wildlife – it’s part of the reason we moved to the country. But we would never consider feeding them on purpose. It just can’t be done.

Garbage is Left Outside, Unprotected

Garbage left outside, whether in cans or bags, is a wildlife attractant, plain and simple. At its least dangerous, crows, ravens and other small creatures will get into it and spread litter around your property. Messy, but not life-threatening. At the other end of the scale, it will attract bears and other large, opportunistic feeders, who will become accustomed to the easy meals and will get mighty ticked off if anything stands in their way. If you’ve never seen what a bear can do in its quest for food, just Google ‘bear damage’ and see what pops up. And as the old adage goes, ‘a fed bear is a dead bear’. What to do instead: Keep garbage secured in a ‘bear-resistant’ garbage container, or locked inside a secure building. Make sure any smelly garbage (fish bones, etc.) is buried, burned or frozen until garbage day, and any plastic or paper wrappers from meat, chicken or fish are well rinsed before they go in the garbage. This will go a long way in making your garbage less attractive to bears.

Now, if any of the above situations sound familiar to you, don’t worry. We’ve all done had at least one of these occur on our properties at one time or another. We’re all busy, and things get missed. But the truth is, it’s easy to dramatically reduce the chance of conflict with bears and other big wildlife. The changes listed above can be made immediately, and without any outlay of cash.

Victoria Gazeley is a designer and communications professional living in an 80-plus year old restored log cabin homestead on a 6 acre rural property in coastal British Columbia, Canada. She created her website, modernhomesteading.ca, for anyone who is wanting a more resilient, self-sufficient lifestyle, whether it be in the city or the country. It’s ‘simple self-sufficiency – with style!