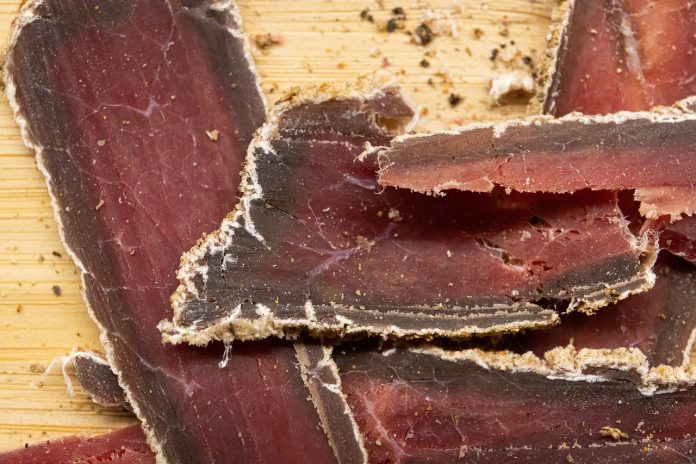 Worldwide, making jerky has no doubt been around since someone discovered that meat tasted better when it was cooked or smoked over a fire. This happened when a lightning bolt struck the first tree. Besides tasting better, it was healthier.

In the beginning meat was cooked on the end of a sharp stick or just thrown on the coals to burn. Much later, some unidentified frontier chef discovered that if you threw on a pile of wild onions with the meat, you had an onion flavored strip of jerky.

Native Americans learned that not everyone likes the taste of plain smoked meat. As time passed they began using various plants and herbs growing in the woodlands, mountains and deserts. They also came to know the plants that were harmful to humans.

Early settlers and North American Indians dried or jerked meat from Deer, Antelope, Elk or Buffalo, depending on the area of the country in which game was more plentiful. Moose meat was prevalent if you live in the Northwest. Deer was plentiful in the Southwest and northern Midwest.

This brings us today, and the way we make jerky. Now we use mostly beef for our jerky though where deer are plentiful, hunters make venison jerky. No longer does one have to build a teepee, build a smoky fire in the center with strips of meat dangling from poles hanging horizontally throughout the tent.

Nowadays, food hydrators dehydrators are used to dry vegetables, fruits and meat. I use the personal ones with plastic trays and a small electric motor to distribute the heat. They are inexpensive but do a good job.

Instead of getting expensive steaks or roasts, I use the cheapest cuts of meat I can find, usually sirloin tip or round steak. After being in the freezer for a couple of hours, it is easy to cut into strips about an eighth of an inch. This way you can uniformly have precision cuts, which is almost impossible to do unless the meat is slightly frozen. With a slicer you can get a perfect cut every time, but most of us don’t have such a machine.

I try to make a low sodium Beef Jerky. Because most Soy Sauces and Worchester Sauces have 700 to 800 grams of sodium, I shop around for a premixed sauce that has these two ingredients with half the salt. A lot of sodium and high blood pressure do not mix.

Here is a recipe that I enjoy.

Once you have mixed all the above thoroughly, put it in any container that will hold it all and let it set overnight. Pour the mixture over the meat strips. Make sure all the meat is covered and then let it set for 45 minutes.

Next, place the strips of meat on the hydrator trays and let them cook for about eight hours. The hard part is done. Exercise a little patience and you will have surprisingly good beef jerky.

Bob Alexander is well experienced in outdoor cooking, fishing and leisure living. Bob is also the author and owner of this article.