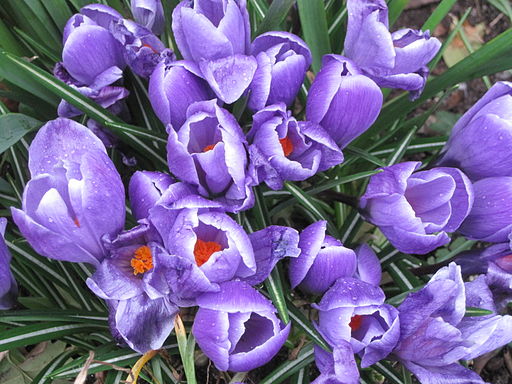 A crocus is a well loved perennial flower that grows that grows to be 3 to 6 inches tall with yellow, purple, lavender and white cup shaped blooms. A member of the iris family, the crocus is a hardy plant that commonly blooms in the spring, with the exception of a few species of crocus that bloom in the fall.

The crocus plant has over 80 species, about 30 of which are raised commercially. The most commonly planted crocus is the Dutch Crocus, also known as the crocus vernus, which also has the largest bloom. Other common species of crocus are crocus chrysanthus, which is one of the first to bloom in late winter or early spring, crocus sieberi, which is also fairly short and blooms very early, and the crocus tommasinianus, another early bloomer that comes in various shades of purple.

Crocuses can be planted both indoors and outdoors, in either flower beds, borders or containers. Crocuses do well with full exposure to sun and can grow in poor to average soils, if the soil is well drained.

When planting crocuses outdoors, the best time to plant bulbs is in the fall when the weather is cool. It is also advisable to plant them where there will be little to no disturbance throughout the winter, and plant them away from small animals that might take them as food, such as squirrels, mice and rabbits. A protected, sunny flowerbed is preferable. Be sure to plant your crocus bulbs under half an inch of soil in shallow holes. Grass cuttings, leaves and straw make an excellent mulch and should be used while growing the plants. The bulbs should also be watered throughout the winter when you are in a snowless area. If there is snow in your area, then water the crocuses until the first snowfall arrives. Shoots should become noticeable when the snow cover melts or in the early spring. Bloom times are in the early spring to early fall.

When planting indoors, be sure to plant the bulbs immediately in small pots containing a layer of small stones or gravel on the bottom, followed by sterile potting soil within an inch and a half of the top. Make sure you plant the bulbs with pointed end up, an inch apart then cover with the soil. The next step is to water the bulb thoroughly and allow the pot to drain. Place the pots in a cold dark place, about 45 to 48 degrees Fahrenheit, for six weeks and check once a week for roots growing and appearing through the drain holes. Once the roots establish themselves, it is time to move the bulbs to a sunny place at room temperature. In three weeks the crocus blooms should appear.

Whether you grow them indoors or outdoors, the crocus will make a lovely addition to your home and/or garden.