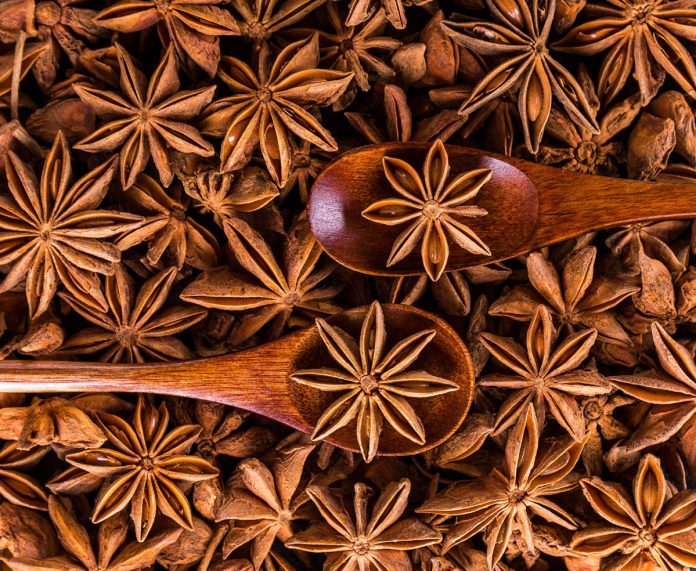 Anise is a flowering plant of the species of Pimpinella anisum, genus Pimpinella, belonging to the family Apiaceae native to to Egypt and the Mediterranean region. The popular herb has been used in traditional herbal medicine as fragrance in soaps, oils, and mouth fresheners and stomachic, anti-septic, anti-spasmodic, carminative, digestive, expectorant, stimulant and tonic agent to treat head-lice and mites, increase blood pressure, prevent formation of gas in the gastrointestinal tract and menstrual cramps, etc.

1. Anise and Menstrual Cramps and Pain

Anise contains certain chemical compounds in relieving the cramps and pain of primary dysmenorrhea, due to immature of the reproductive organs of young girls, according to the study of “The effect of an Iranian herbal drug on primary dysmenorrhea: a clinical controlled trial” by Nahid K, Fariborz M, Ataolah G, Solokian S., posted in PubMed (1), researchers found that The magnitude of the reduction was significantly greater in the SCA (500 mg of highly purified saffron, celery seed, and anise) group than in the mefenamic acid and placebo groups. Both drugs effectively relieved menstrual pain as compared with the placebo. More clinical trials are needed to establish the efficacy of this herbal drug.

Thrombosis is defined as a condition of formation of a blood clot inside a blood vessel, leading to the obstruction of blood flow of the circulatory system. Anise can help to reduce the risk of thrombosis due to the essential oil anethole, according to the study of “Protective effect of Foeniculum vulgare essential oil and anethole in an experimental model of thrombosis” by Tognolini M, Ballabeni V, Bertoni S, Bruni R, Impicciatore M, Barocelli E., posted in PubMed (2), researchers found that both F. vulgare essential oil and anethole (100 mg kg(-1) oral administration) provided significant protection toward ethanol induced gastric lesions in rats. In conclusion, these results demonstrate for F. vulgare essential oil, and its main component anethole, a safe antithrombotic activity that seems due to their broad spectrum antiplatelet activity, clot destabilizing effect and vasorelaxant action. 3. Head louse infestation

Eventhough Permethrin has been used most widely as an insecticide, acaricide, and insect repellent to treat Head louse infestation, but as a result of mutation of the fests which makes the Permethrin less effective, anise is considered as one of replacement for the synthetic chemical, according to the study of “Clinical trial showing superiority of a coconut and anise spray over permethrin 0.43% lotion for head louse infestation, ISRCTN96469780.” by Burgess IF, Brunton ER, Burgess NA., posted in PubMed(3)

Anise oil, in some studies has demonstrated the exhibition of the high levels of antiviral activity against HSV, according to the study of “Efficacy of anise oil, dwarf-pine oil and chamomile oil against thymidine-kinase-positive and thymidine-kinase-negative herpesviruses” by Koch C, Reichling J, Kehm R, Sharaf MM, Zentgraf H, Schneele J, Schnitzler P., posted in pubMed(4)

Extract of anise have shown an antiviral property of inhibition of the spread of the infectous virus, such as virus types 1 and 2 (HSV-1 and -2), human cytomegalovirus (HCMV) and measles virus by interfering the virus adsorption to the host cell surface, according to the study of “Antiviral and immuno-stimulating effects of lignin-carbohydrate-protein complexes from Pimpinella anisum” by Lee JB, Yamagishi C, Hayashi K, Hayashi T., posted in PubMed(6)

Acetophenone, a ingredient of Anise was used in medicine in the late and early 20 century under the drug named Hypnone and considered as a representative analgesic and hypnotic used to treat painful affections of the fifth nerve, tic-douloureux, rheumatic disturbances of the dental branches of the same nerve, in hemicrania, and similar disorders, etc., according to the article of
“Hypnone”, posted in Chest of Books.com(9)

Limonene, another ingredient of Anise has been used in treating Gastroesophageal reflux disease and heartburn, as aresult of its its gastric acid neutralizing effect and its support of normal peristalsis, according to the study of “D-Limonene: safety and clinical applications” by Sun J., posted in PubMed(10)

It is said the Anise can help to increase urine excretion and reduce the risk of water retention and floating, according to the article of “Water Retention Remedies From Your Kitchen” by Janet Martin, posted in Article Base(11)

1. If you have high blood pressure or pregnant please consult with your doctor or related field specialist before applying
2. Star Anise is toxic, according to the study of “[Apparent life-threatening event in infants: think about star anise intoxication!].[Article in French] by Perret C, Tabin R, Marcoz JP, Llor J, Cheseaux JJ., posted in PubMed(12).
3. Skin Irritation
4. Allergic reaction such as mouth and lip inflammation, according to the study of `Aniseed-induced nocturnal tongue angioedema` by Gázquez García V, Gaig Jané P, Bartolomé Zavala B., posted in PubMed(13).

Kyle J. Norton has been studying natural remedies for disease prevention for over 20 years and working as a financial consultant since 1990. Master degree in Mathematics, teaching and tutoring math at colleges and universities before joining insurance industries.