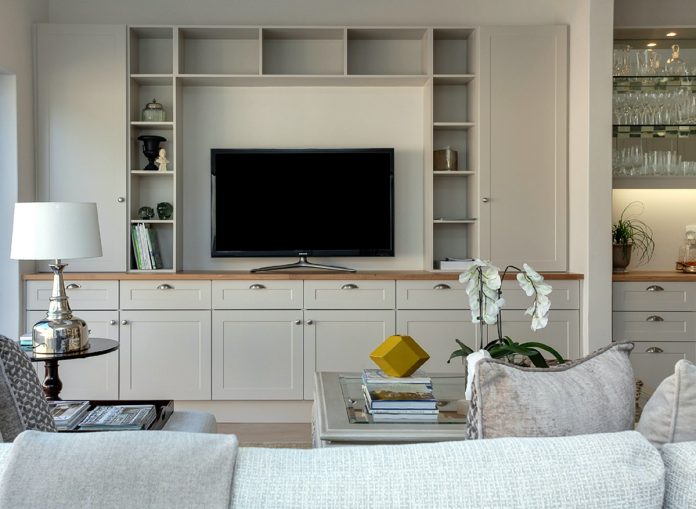 Part 1: The Problem with All Basements

There are basically two kinds of basements. A finished basement has had architectural elements installed over the bare bones outline of the space, to enhance its appearance and convenience. Some installations may include wall veneers, installed flooring, grounded electrical outlets, and overhead lighting. Unfinished basements don’t have such amenities and are often marked by exposed concrete facing, support beams, a lack of electrical options, and nonlinear walkways. While the two kinds of basements are very different from a decorative perspective, there are several elements which are common to both, and need to be considered when organizing the space.

Almost all basements suffer from a lack of natural light. This is because their position, recessed in the ground, makes it difficult to install windows in their walls. What openings there are usually have to be placed near the ceiling, at such an angle that they aren’t conducive to allowing sunlight.

This can be countered by making certain that there is a wealth of artificial lighting in the room. Overhead fixtures will provide the greatest illumination, although you may want to experiment with the various shadow effects you can create with floor lamps, before having anything installed. Mirrors placed opposite existing windows can also multiply the amount of sunlight you can transmit through the room.

Another common problem to most basements is the stale feeling that can permeate the space, both in the air and through a psychological feeling of being confined in the subterranean space. This close, stagnant feeling has the potential to ruin your basement by producing feelings of lethargy or depression, and creating health problems from the un-circulated air.

One easy way to combat this is to use fans and ventilation systems to keep the air in the space flowing. A central air system will give you optimal control over the environment, although your solution can be as simple as a window fan. Free standing fans will be the least effective, as most of the sources of fresh air will be in spaces near the ceiling.

Another way to combat stagnation is by rebuilding a connection with nature in the space. The natural world is chaotic and fluid, and can provide a balance to the rigid, uninspired organization found in most basements. Unfortunately, the lack of sunlight makes it difficult to use plants, but the gentle tranquility of an aquarium can evoke the necessary ambience. The use of natural materials such as wood or stone can also artificially evoke the essence of the natural.

The inherent problems with decorating basements can usually be overcome with a little creativity. The ability to add architectural installations makes evading these issues much easier. However as we will see in the next section, even the most coarse and unfinished space, can be decorated in a such a way that a subtle beauty is evoked, from amidst the rough.

If you are not fortunate enough to have the big bucks necessary to do an overhaul on your basement, you may have sealed it off as wasted space, or relegated it to storage for old junk. However with a few creative touches, it may be possible to dull the dilapidated feel of this space, and actually create an attractive room.

Water is the biggest problem in most basements, and will determine what you can eventually do with the space. Since your basement is underground it is the room which is closest to the water table. The water table is the subterranean level at which the soil is completely saturated. This level will rise and fall according to how wet the weather in the region is, the phase of the moon, and the tides, and can potentially result in a flood

If you live in a place where the water level is situated such that flooding can occur, then you will have to limit the kinds of material you use in the decoration of this space. Floor rugs, felt and cloth furniture, pillows, and wooden furniture are all in danger of being ruined at the next great deluge. Electrical accessories will also have to be limited, as leaving them plugged in during inclement weather could result in a fire.

If you are in danger of having a flood, there are still a few decorative options you have to dress up the space. Plastic lawn furniture includes a wide variety of chairs, tables, and even recliners which are all resistant to moisture damage. Placing cushions in the seat will help to increase the comfort and simulate normal indoor furnishings. If you are tied to your wooden fixtures, try raising them on bricks. As long as the flooding isn’t too severe you may be able to avoid damage to the pieces, or at least limit it to the legs.

A flood alert system, and a sub pump, may also provide you with some added security. These devices are placed on the basement floor, close to the place where flooding first occurs, usually near a window or outer door. When a flood begins, the alert system sounds an alarm, informing those in the house to the incoming water. The sub pump can then be turned on, to start expelling the water out of the basement. This can give you the time necessary to move any moisture sensitive materials to safety, before the deluge gets out of control.

Lack of sunlight and lighting in general, is a problem in almost all basements. However this can be used in a strategic manner, to control exactly what is seen when you walk into the room. A word of caution, any electrical lighting should be implemented with considerations given to the potential for a flood in this space.

Light is very powerful, it controls the way we perceive the world around us. If your basement has unattractive features, using light and shadow to hide them can be a powerful way to determine the appearance of the room. Alternatively, you can direct light towards more attractive spaces, or decorative accents, to draw people’s attention to those spaces which you want to emphasize.

In this endeavor your tools will be floor lamps, desk lamps, overhead fixtures, and lighted accessories. Overhead lights will give the most general illumination, and won’t allow you a lot of strategic control. Floor and desk lamps shine out rather then down, creating shadows where it is blocked by obstructing objects, and allowing you to affect the flow of the light. The shades on these fixtures further allow you to direct the flow of illumination. There are too many variables to use any set of standard rules to determine the best way to position your fixtures, but by experimenting with various layouts you will be able to determine the optimal design for your lighted scheme.

Illuminated accessories include items such as string lights, onyx lamps, neon lights, Christmas lights, lava lamps, and other novelties. These items are generally not bright enough to light a room by themselves, but their glow is strong enough to direct the focus of a space onto a limited area. Placing them in a specific area can create a colorful corner of intimate ambiance, which lights up exactly what you want people to see, while concealing everything beyond its range.

The basement is a problem to decorate. The threat of flooding limits what you can accomplish, the lack of windows makes it dark, and the confined spaces can make it feel stagnant. However it doesn’t have to be a wasted space, relegated to storage and rarely used. With some creativity, and strategic planning, it is possible to control the negative aspects of the room, and even turn them into decorative benefits, transforming even the roughest application, into a beautiful location.