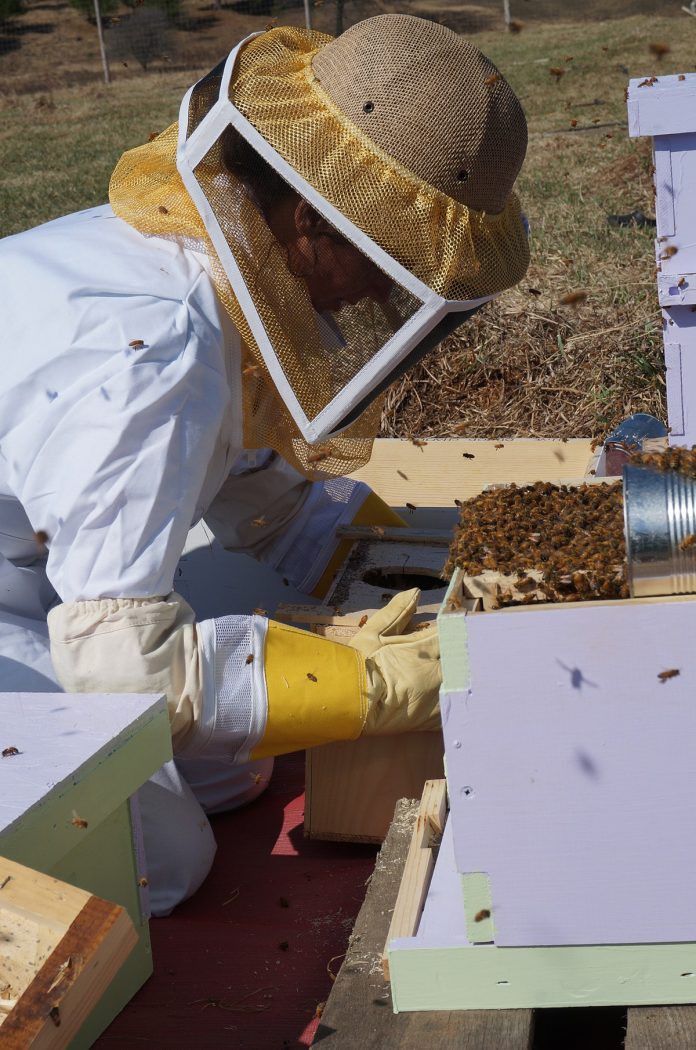 Many people find that the beekeeper’s hat is the most important part of a beekeeping protective gear. But, is that really the case? Than what is the importance of a veil? Is it less important than the hat? Well, to answer those questions lets have a closer look at both the hat and veil.

Actually you can find many designs of a hat and veil. A hat or veil can be purchased as separate pieces but also as a combo of hat and veil. In most cases the offer is to buy the total set of a protective gear that includes a beekeeper jumpsuit, hat, veil and gloves. When a beekeeper uses this complete set, he may look like an astronaut walking on the moon.

The hat and veil is often designed as one piece to provide practicality. While the hat and veil as separate pieces may also give you some benefits, but it is rather impractical and less secure compared to the one piece hat and veil design. This one piece head protective cover can be easily and tightly zipped to the beekeeper suit leaving no gap for the bees to enter.

It can be assumed that the hat is to protect the head, and the veil to protect the face and neck. It can also be assumed that the face and neck are the most critical parts of the body that should be absolutely protected against bee stings. There are happenings of bee stings on these critical areas of several beekeepers which cause very painful sensation and remarkable swelling.

Unlike a bee sting on bare hands which can be easily wiped off by a finger nail and does not cause serious suffering, a bee sting on the face and neck area is quite difficult to be promptly wiped off without the presence of a mirror. So, this may conclude that the hat and veil together are the most important part of a protective gear. A hat has no meaning without a veil and vise versa in terms of protecting the head, face and neck.

A beekeeper hat should have a light color and made of close plaited cloth attached to the veil which can or can not be detached from the hat. The veil is basically a type of tight mesh that provides you with good visibility but still preventing the bees to go through and cause problems

And what about the other parts of the protective gear, the jumper suit and gloves? They have some important duty too in protecting the other parts of the body. You may notice that a complete protective gear is light colored, usually white or another neutral light color. A light color is contrast to the darker color of a bee. Thus if in case a bee attempts to sting a beekeepers and get stuck to the beekeepers suit, it is easily noticeable and wiped off.

Bees are very much attracted to someone’s breath. This is the reason why bees are trying to attack the face and neck area of a beekeeper. But still, there is a possibility that a bee can sting other parts of the body, which in some cases can be harmful, especially for those who are allergic to bee venoms. Here is why you need a beekeeper suit and gloves.

However some beekeepers do not like to use the gloves since it might hinder the beekeeper’s delicate work. Besides, a bee sting on bare hands can be easily wiped off by a finger nail, just to reduce the effect of venom injected by a sting.

If I may conclude, the hat and the veil are the most important part of the beekeeper suit. Not only the hat nor the veil, they should come together to get the optimum protective effect. Use your hat and veil and do not go out for beekeeping without them. This should be a very rational advice, isn’t it?

Uno Birawan is a writer and wrote a lot about beekeeping.