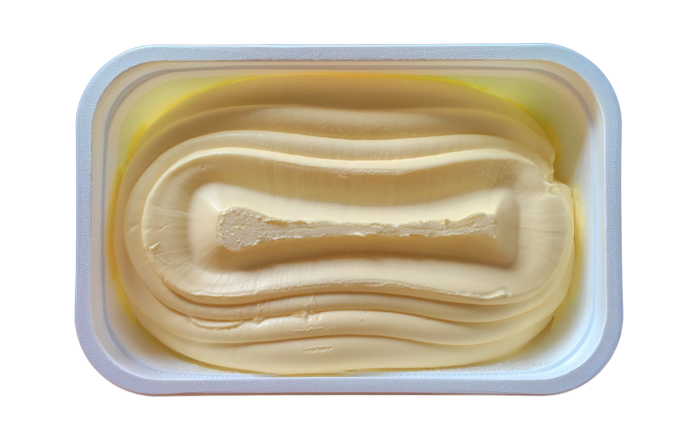 There is a delightful rumor buzzing across the Internet about the origin of margarine.

Margarine was originally produced to fatten turkeys. The people who had invested their money into the research wanted a return so they put their heads together to figure out what to do with this product to get their money back, following the death of the turkeys.

Its white substance had no food appeal so they added yellow coloring and sold it to people to take the place of butter.

However, the real fact is that margarine was first produced in 1869 by French chemist Hippolyte Mege-Mouries, in response to the offer of a prize by Emperor Louis Napoleon III of France, who asked if anyone could make a satisfactory replacement for butter. It had to be able to be used by the armed forces and for the lower classes, (Wolfe 2000).

Understanding the difference between butter and margarine can make a real difference to both your health and your weight.

Both products contain the same amount of calories, although butter is slightly higher in saturated fats at 8 grams; compared to 5 grams for margarine.

One down side of margarine is that it possibly increases heart disease in women by 53%, according to a Harvard Medical Study.

The quality of breast milk has proven to be lowered because of the presence of more trans fat in the milk after consuming margarine.

Trans fat increases the risk of diabetes as it appears to increase the blood insulin levels. Many experts say there is a correlation between trans fat and various types of cancer, including breast cancer, plus a number of other health conditions, including stroke and gallstones.

Margarine is manufactured from hydrogenated oils, (the molecular structure is altered by adding hydrogen). This makes the liver work much harder, instead of getting to work to remove the bad fat from our bodies. It is always wiser to refrain from eating processed foods.

A and D build strong bones and E is an important ant-oxidant. Vitamin A is important for the function of the immune system. Butter is one of the best natural sources of vitamins A, D and E.

Finally, if you leave a container of margarine open outside in your garage, or a shaded area you will discover it attracts no flies. It does not smell any different, or rot. Nothing will grow on it.