Back to Nature – Honey 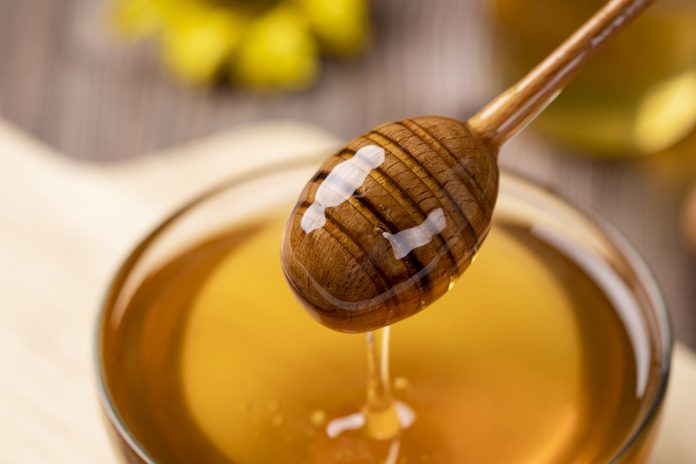 Honey use and production has a long and varied history. In many cultures, honey has associations that go beyond its use as a food. It appears in literature, religion, linguistics, folk belief and is frequently a talisman and symbol of sweetness. The main uses of honey are in cooking, baking, as a spread on breads, as an addition to various beverages such as tea and as a sweetener in commercial beverages. It is the main ingredient in the alcoholic beverage mead, which is also known as “honey wine” or “honey beer” (although it is neither wine nor beer). It is also used as an adjunct in beer. It is a sweet fluid produced by honey bees and derived from the nectar of flowers. It gets its sweetness from the fructose and glucose, has attractive chemical properties for baking and a distinctive flavour which leads some people to prefer it over sugar and other sweeteners.

It contains Carbohydrates (Sugars and Dietary fibre), Fat, Protein, Water, Vitamins B2 (Riboflavin), B3 (Niacin), B5 (Pantothenic acid), B9 (Folate), B6 and C, Calcium, Iron, Magnesium, Phosphorus, Potassium, Sodium and Zinc. It is a mixture of sugars and other compounds. With respect to carbohydrates, honey is mainly fructose (about 38.5%) and glucose (about 31.0%). Honey’s remaining carbohydrates include maltose, sucrose, and other complex carbohydrates. It also contains tiny amounts of several compounds thought to function as antioxidants, including chrysin, pinobanksin, vitamin C, catalase, and pinocembrin. The specific composition of any batch of honey will depend largely on the mix of flowers available to the bees that produced the honey.

Its collection is an ancient activity. Eva Crane The Archaeology of Beekeeping (1983) states that humans began hunting for honey at least 10,000 years ago. She evidences this with a cave painting in Valencia, Spain. The painting is a Mesolithic rock painting, showing two female honey-hunters collecting honey and honeycomb from a wild bee hive.

In Ancient Egypt, honey was used to sweeten cakes and cookies, and was used in many other dishes. Ancient Egyptian and Middle-Eastern people also used honey for embalming the dead. In the Roman Empire, honey was possibly used instead of gold to pay taxes. Pliny the Elder devotes considerable space in his book Naturalis Historia to the bee and honey, and its many uses. The fertility god of Egypt, Min, was offered honey. In some parts of post-classical Greece, like Rhodes, it was formerly the custom for a bride to dip her fingers in honey and make the sign of the cross before entering her new home.

Honey in the Bible. The Old Testament contains many references to honey. In The Book of Judges, Samson found a swarm of bees and honey in the carcass of a lion (14:8). In Matthew 3:4, John the Baptist is said to have lived for a long period of time in the wilderness on a diet consisting of locusts and wild honey. The book of Exodus famously describes the Promised Land as a “land flowing with milk and honey”.

In Jewish tradition, honey is a symbol for the New Year—Rosh Hashana. At the traditional meal for that holiday, apple slices are dipped in honey and eaten to bring a sweet new year. Some Rosh Hashana greetings show honey and an apple, symbolizing the feast. In some congregations, small straws of honey are given out to usher in the New Year.

In Islam, there is an entire Surah in the Qur’an called al-Nahl (the Honey Bee). According to hadith, Prophet Muhammad strongly recommended honey for healing purposes. The Qur’an also promotes honey as a nutritious and healthy food.

In Buddhism, honey plays an important role in the festival of Madhu Purnima, celebrated by Buddhists in India and Bangladesh. The day commemorates Buddha’s making peace among his disciples by retreating into the wilderness. The legend has it that while he was there, a monkey brought him honey to eat. On Madhu Purnima, Buddhists remember this act by giving honey to monks. The monkey’s gift is frequently depicted in Buddhist art.

In Western culture the word “honey”, along with variations like “honey bun” and “honey pot” and the abbreviation “hon”, has become a term of endearment. In many children’s books bears are depicted as eating honey, (e.g. Winnie the Pooh) even though most bears actually eat a wide variety of foods, and bears seen at beehives are usually more interested in bee larvae than honey. In some European languages even the word for ‘bear’ (e.g. in Russian ‘medvéd’, in Czech ‘medved, in Hungarian medve, in Croatian ‘medvjed’) is derived from the noun which means ‘honey’ and the verb which means ‘to eat’. Honey is sometimes sold in bear-shaped jars or squeeze bottles.

Because of its unique composition and the complex processing of nectar by the bees which changes its chemical properties, honey is suitable for long term storage and is easily assimilated even after long preservation. History knows examples of honey preservation for decades, and even centuries. A number of special prerequisites are, however, necessary to achieve these conservation periods. It includes sealing the product in vessels of chosen material, kept in a favourable environment of specific humidity, temperature, etc. One example is the natural process of bees sealing of the honey in honeycomb cells with wax caps. Acacia honey is known to be more resistant to crystallization.

Traditionally honey was preserved in deep cellars and stored in ceramic or wooden containers; however glass is now the favoured material. When conventional preservation methods are applied, it is not recommended to preserve it for longer than 2-3 years. As honey has a strong tendency to absorb outside smells, it is advisable to keep it in clean, hermetically sealed vessels. It is also advisable to keep it in opaque vessels, or stored in a dark dry place, preventing it from absorbing any moisture. If excessive moisture is absorbed it can ferment. It should not be preserved in metal containers, because the acids in the honey may promote oxidation of the vessel. This leads to increased content of heavy metals, decreases the amount of nutrients, and may lead to stomach discomfort or even poisoning. Because honey has a high tendency to absorb outside smells and moisture, it is not advisable to preserve it uncovered in a refrigerator, especially together with other foods and products. Excessive heat can have detrimental effects on the nutritional value of honey. Heating up to 37Deg C causes loss of nearly 200 components, part of which is antibacterial. Heating up to 40Deg C destroys invertase, and important enzyme. Heating up to 50Dec C turns the honey into caramel (the most valuable honey sugars become analogous to sugar).

For more than 2000 years, it has been used by humans to treat a variety of ailments through topical application, but only recently have the antiseptic and antibacterial properties of honey been chemically explained. Wound Gels that contain antibacterial honey and have regulatory approval for wound care are now available to help conventional medicine in the battle against drug resistant strains of bacteria MRSA. As an antimicrobial agent it may have the potential for treating a variety of ailments. Antibacterial properties are the result of the low water activity causing osmosis, hydrogen peroxide effect and high acidity.

Some studies suggest that the topical use of honey may reduce odours, swelling, and scarring when used to treat wounds; it may also prevent the dressing from sticking to the healing wound. A review in the Cochrane Library suggests that honey could reduce the time it takes for a burn to heal – up to four days sooner in some cases. Antioxidants in honey have even been implicated in reducing the damage done to the colon in colitis. Such claims are consistent with its use in many traditions of folk medicine. Most micro-organisms do not grow in honey because of its low water activity.

It appears to be effective in killing drug-resistant biofilms which are implicated in chronic rhinosinusitis. Topical honey has been used successfully in a comprehensive treatment of diabetic ulcers when the patient cannot use other topical antibiotics. It has also been used for centuries as a treatment for sore throats and coughs, and according to recent research may in fact be more effective than most common medicines. Mixed with lemon juice and consumed slowly, it coats the throat, alleviating discomfort. The antibacterial and antiseptic properties aid in healing sore throats and laryngitis.

NB: Honey frequently contains dormant endospores of the bacterium Clostridium botulinum, which can be dangerous to infants as the endospores can transform into toxin-producing bacteria in the infant’s immature intestinal tract.

A main effect of bees collecting nectar to make honey is pollination, which is crucial for flowering plants. The study of pollen and spores in raw honey can determine the floral sources of honey. Because bees carry an electrostatic charge, and can attract other particles, the same techniques of can be used in area environmental studies of radioactive particles, dust, or particulate pollution.