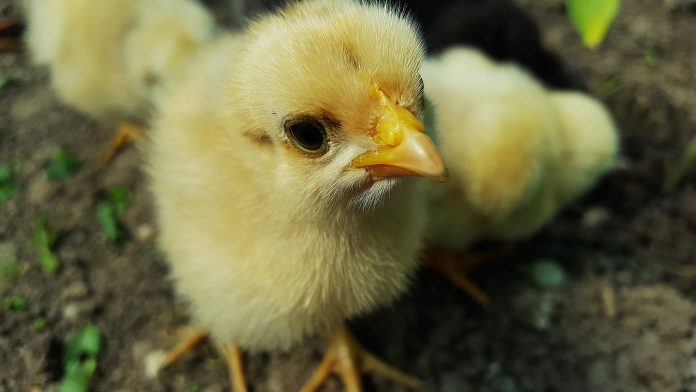 I’ve had a lot of experience raising chicks. Sometimes I let a broody hen raise some chicks just for fun. Sometimes I have to replace chickens that were lost to predators and other times I need younger hens to lay more eggs. I usually don’t have a lot of problems adding new chicks to my flock and the chicks defend themselves with no help from me.

Typically, I raise chicks in one of two ways. The first way is to pull some eggs and put them in an incubator. When those chicks hatch, they are kept inside for a few days and are then moved outside to their own chicken house and chicken run. But, since my chickens free range, the main flock of chickens can see the chicks. They actually spend a great deal of time watching the new babies as they run and play.

With the chicks that I raise without a mother, I have learned that it is generally safer to not attempt to introduce them until they are at least 12 weeks old. At this age, the chicks are big enough and the chicks defend themselves from the other chickens if anyone attacks them. At this age, they are also pretty fast and can run away from any chicken that is being mean. The older hens usually aren’t motivated enough to chase them much, if at all and there are usually no problems.

When the chicks are about 12 weeks old, I begin leaving the gate to the chicken coop open and allow the chicks to run around as they please. For the first few weeks they only venture out occasionally and they run back in at the first sign of trouble. Gradually, they get braver and will range far away from their home. I always lock them back in their own area at night until they decide they are ready to go to the main chicken house. They gradually mingle with the main flock and are integrated without much trouble. Even if a hen picks on them, the chicks can defend themselves without any problems.

Every year I have two or three hens that get broody so I pick a few eggs and let the hen sit on them and raise them. Once I’m sure that she is broody, I separate her in her own small chicken coop and small run so that she is protected from the main flock. If I don’t do this, the other hens will harass her non stop and chase her off the nest and lay their eggs in her nest. This is a huge problem because I don’t want that many chicks and the eggs are at different stages of development. I’ve heard about hens moving from nest to nest to sit on fresh eggs, but that has never happened to me. My hens return to the original nest if they are chased off before I move them and just resume sitting on however many eggs are there.

Once the eggs hatch, I open the gate to the chicken run and allow her and her chicks to roam free. My chickens free range over a few acres and there is plenty of room for all of the chickens to escape each other. My roosters are also very protective of the entire flock and come running at any sign of trouble. The hens always defend their chicks very well on the odd occasion that it was needed. For the most part, the rest of the flock will ignore the chicks and usually don’t cause any problems. At night, I do put the hen and her chicks up in their own chicken house and chicken run for the night to avoid any roosting problems. The chicks are too small at this point to roost anyway and they need their own secure area to rest.

As the chicks get older, usually around 6 weeks although it can vary either way by a week or so, the hen will begin to ignore her chicks or she will begin to actively chase them away from her. At that point, she is allowed to start roosting with the main flock and I keep the chicks in their own area until they are at least 12 weeks old.

One reason that this works for me is that my chickens free range over a fairly large area. If your chickens are not free range, it would be a bad idea to allow the hen and her chicks to run with the main flock. This could lead to the death of some or all of the chicks.

I have one large chicken house that can easily hold a large number of chickens. I also have three smaller chicken houses that some of the other chickens like to roost in. A few of my very stupid chickens have decided to roost in the horse barn with the horses. So, my point is that there are a lot of roosting options for my flock so there is never any over crowding which can lead to problems. I tend to just let them roost where they want to and I close up any areas that I can. The rest of them take their chances.

Given that I have a lot of chickens, I have set up three different feeding and watering stations so that everyone can eat. So, once the chicks are on their own, they can still eat if they are chased away from one feeder. The chicks can defend themselves since they are almost as big as the adult chickens. I do keep a close eye on them and if I notice they are having trouble eating, then I lock them in their own run for awhile. I’ve actually only had to do this twice in all the years I’ve had my chickens.

My chickens are pretty laid back and accept the new batches of chicks pretty quickly. I have four roosters and while the alpha has the largest “harem”, the other three boys do have their own harem and are usually happy to add new hens to the mix.