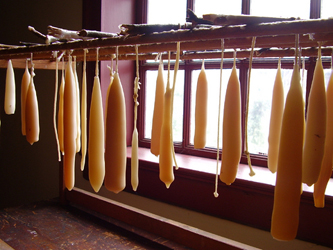 In colonial times, candle making was an essential annual chore in all households. Taper candles were the only source of light for people’s homes, and there were no commercial candles available as there are today. Each household made its own candles, usually once a year. The average household needed around 400 candles a year, so this was a huge job.

Since the candles were made from tallow, or animal fat, this event usually coincided with the autumn slaughter of animals for meat. Tallow could be made from the fat of all farm animals, but that from sheep tallow was the most desirable. Pig tallow had a very bad smell, and was used by people who couldn’t afford either beef or sheep tallow.

The earliest settlers made their candles by the dipping method. A wick of cotton was dipped repeatedly into the melted tallow, with time to cool and harden between dips. This made a taper candle. These home made candles did not burn very well, emitted odors, and the light was poor.

Those who could afford beeswax had candles from that wax. These were generally rolled from sheets of beeswax, and had a sweet honey smell. Beeswax was not very available, it was expensive, and only the very rich could afford to use candles made from it as a daily way of lighting their homes.

Some colonists found that they could make a wax from bayberries, which have a waxy coating. They boiled the berries, and the wax was skimmed from the top. This was a source of pleasant smelling wax, but there were some drawbacks. Huge numbers of berries were needed – about 15 pounds of bayberries were needed to make just one pound of bayberry wax! Since time was often at a premium for colonial women, this was not an efficient way to make candles. Also, the resulting candles were quite soft, and did not keep well in hot weather.

In the late 1700’s, whaling became an important industry in the Eastern part of America, and spermaceti (a waxy substance from the whale’s head) was found to make much better candles. This wax was harder than either tallow, beeswax or bayberry wax. The candles burned longer and brighter, and stood up to summer heat much better. They were quite expensive.

Around the same time, candle makers started to use wooden molds to make candles. This important innovation allowed candles to be made much faster, and the candles were uniformly shaped. Some candle makers would travel around, taking their molds and equipment, and making candles for people. Others set up a candle making business in one location, and sold their candles.

In the early 1800’s paraffin was first made from coal tar, and around 1850, it became commercially viable, when James Young filed a patent to produce it from coal, which was extensively mined in the eastern states. Paraffin was used to make candles of high quality, and along with the new machines that could make 1500 candles an hour, they became inexpensive and widely available.

Read more:  The History of Candles from Prehistoric Times until Now

Although they are no longer the major source of light for our homes, candles have grown in popularity and use in recent times. For many of us, candles are lit to mark celebrations; they symbolize romance, scented ones soothe our senses, and decorative candles accent our homes, where they cast a warm and mysterious glow for us to enjoy.