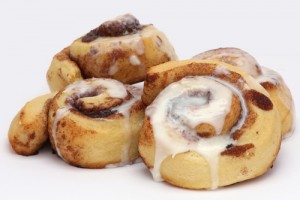 A lot of people think you need to spend an entire day making delicious cinnamon rolls. Well, perhaps. A lot of recipes are definitely set up that way. However if you’ve ever wanted to know How to Make Cinnamon Rolls [this] easy brunch recipe will fit the bill.

By the way, if you have a hard time getting your kids out of bed in the morning, nothing will make them come downstairs faster than taking some of these hot, fresh cinnamon buns out of the oven in the morning. The fragrant aroma of cinnamon alone is enough to stir even the most stubborn of beast.

1. Preheat oven to 350 degrees.
2. Beat eggs in mixing bowl, then mix in Bisquick and milk, until soft and consistent.
3. Lightly knead until soft and smooth.
4. Roll out into 10×8 inch rectangle.
5. Cover evenly with butter, then cinnamon and sugar.
6. Starting with wide, 10 inch side, tightly roll dough. Pinch off edge of roll to seal.
7. Transfer roll to an ungreased baking sheet, seal side down.
8. Using scissors, cut the roll in 1″ increments, almost cutting through to the bottom, but not quite.
9. Bake 15-20 minutes.
10. While baking roll, mix confectioners sugar and water until smooth. After baking, glaze rolls with glaze mixture.

If you’ve ever wanted to learn How to Make Cinnamon Rolls [then this] easy brunch recipe is it! Not only is it simple and straightforward, it is also versatile. If you like, add either a teaspoon or a tablespoon, to taste, of lemon juice to the glaze. That will add an extra dimension of flavor without overdoing it.

If you find yourself having to fly out the door on busy weeks (and even weekends) and you need something a bit more substantial in terms of meals on the go than just a delicious cinnamon roll, you might consider adding raisins, apples, pecans, or even walnuts to your recipe, so that way you have more of a healthy snack or meal on the go, rather than the purely guilty pleasure that these buns make for in the morning. You can also sprinkle in some sugar free chocolate morsels to add some delectable, zazzy chocolate sweetness and flavor, without going overboard.

This would also serve well with some delicious hot cocoa or coffee. Whatever your choice, these buns will be the perfect compliment.

Cozy Up Your Kitchen with This Giant Cinnamon Bun Recipe