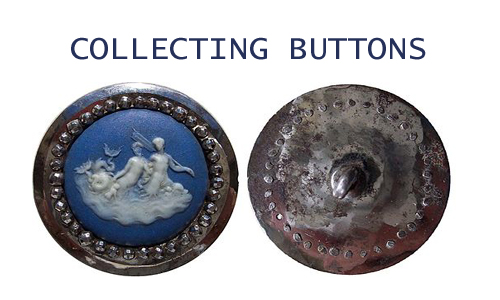 If you want to be a collector and only have a small budget you might want to consider collecting buttons. Many households have a button bag or box where discarded buttons are kept. In thriftier times no garment would have been thrown out without removing the buttons first and keeping them for future use. On examination you might find that you have buttons that belonged to your grandmother or great-grandmother and your buttons do not only cover three or four generations, but they are also a fascinating insight into the history of fashion.

The first buttons in Britain were made in the Shaftesbury area of Dorset around 1620, they were made out of ram’s horn and covered with fabric and were then embroidered with undyed linen or cotton thread. The buttons were stitched onto cards and were exported to Europe and America between the late 18th century and the middle of the 19th century, it was a very lucrative business. Then, at the Great Exhibition in 1851, John Ashton exhibited a machine that could cheaply produce fabric-covered buttons and that was more or less the end of the demand for Dorset buttons.

Button making was now taken up by in the cities by the likes of Wedgwood, who turned out tiny cameos of jasperware for buttons. The demand for more buttons was now driven by a change in fashion. Until the end of the 18th century buttons had been made predominantly for men, while women used hooks and laces to fasten their clothes. During the Napoleonic wars women began to ape men’s fashion and military style jackets became highly fashionable. By the mid 19th century beautifully decorated buttons were the norm on ladies’ clothing and made a very nice gift. Often, for a 21st birthday, a young lady was given a leather case, containing a set of six silver buttons, adorned with flowers, fruits, birds, leaves or geometric patterns.

Buttons such as these were not suitable for washing and they would have been attached with toggles so that they could be removed easily. When the garment wore out the buttons would be removed and attached to a new dress or coat. The Victorians found all kind of innovative ways for wearing their buttons, some sown onto bonnets or purses.

If you want to start collecting buttons, there is an enormous range and you might want to focus on a particular area. British railway companies each produced their own button, with designs varying according to rank. While the lower ranks wore white buttons, the management had buttons made of brass.

The prices for buttons vary – while you can have early Dorset buttons for less than £10 for half a dozen, Wedgwood buttons or any buttons relating to the French revolution can set you back several hundred pound. Buttons made by particular firms like Bimini, which specialised in glass buttons or makers such as Lucie Rie are very collectable. Lucie Rie worked for Bimini for a while but she also made pottery buttons under her own name. As they were not marked they are very difficult to identify, unless you can get hold of the catalogue of her studio sale.

One of the great things about collecting buttons is their affordability, often they can be had for pennies. You should try car boot sales, jumble sales, charity shops and internet auctions. As with all collectables, there are the high-end items and you would have to pay considerable more for solid silver buttons or those made by a famous designer In 2006 a set of dress buttons by Chanel, sold with matching cuff links, fetched £6,240 at auction.

As buttons are often unmarked they are difficult to identify and date, but you can get help with that from the British Button Society. If you are interested in the history of buttons take a trip to Birmingham Museum and Art Gallery, they have an extensive selection of Birmingham made buttons and you might find some inspiration for collecting buttons.